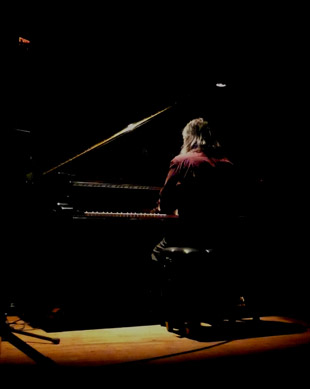 Last week, the Flamboyan Theater in New York hosted Numina Lente, a three-night music and performance festival curated by Jay Sanders and Keith Connolly, with bills including Lubomyr Melnyk, Tony Conrad and Charlemagne Palestine, Bill Orcutt (formerly of Harry Pussy), Blood Stereo, Hype Williams, and Michael Smith with Title TK (Cory Arcangel, Howie Chen, and Alan Licht). Besides my excitement for individual acts, I was struck by the beyond-or-outside-genre quality of the program as a whole. In an initial email, Sanders mentioned a few intentions: “To address some blind spots in terms of music presentation in the city: a bit of a nostalgia for clubs like Tonic, the Cooler, etc., in Manhattan. To carefully pick individual acts whose work is nonidiomatic, hard to place, and singular. To draw on a network of people in NYC committed to these kinds of things, so the eccentric resources of the city’s vibrant scene can come into play.” A further exchange appears below. —SAM FRANK

Sam Frank: Let’s start with the title. Numina Lente—or, per the logo, NUMINA lente. Numen, plural numina, means “presence,” and has to do with the spirits or gods present in the everyday. Lente means “slowly.” There’s Slow Food—is this a suggestion of Slow Music (not slow music), of some kind of transcendence in the experience of the quotidian?

Keith Connolly: Yes, “slowly holy,” or “holy lens” … the term numinous was used by German theologian Rudolf Otto in The Idea of the Holy (1917). It was his attempt to qualify the moment in awe that extends indefinitely, outside of time—what he refers to as a “feeling of peculiar dread.” Our everyday experience, saturated as it is by the technological instantaneous, is quite antithetical to this. So the NUMINA lente programming was an attempt to reconnect the audience to this kind of noninstantaneous experience. And there has been much in music of late employing slowed-down or time-stretched elements: the post–Three 6 Mafia “chopped + screwed” aspect of much hip-hop, Graham Lambkin’s increasingly experimental sound work, and Detroit-area noise artists like Andrew Coltrane, Lidless Eye, and Tarpit being some examples. This can be heard distinctly in Hype Williams’s music as well. I recently heard a time-stretched version of the theme from Jurassic Park that absolutely floored me!

SF: This was a three-night festival on the Lower East Side. Given the location and duration of NL, and the range of musicians/performers booked, a number of models spring to mind. You mentioned the departed & beloved intelligently & diversely booked Lower Manhattan spaces like Tonic and the Cooler, where, plausibly, over a few years, you could see everyone playing Numina Lente. Then there are the short, heavily curated festivals like All Tomorrow’s Parties (rock, mostly) and No Fun Fest (noise). And then there’s the dispersed situation in NYC today: Experimental Intermedia, Roulette, sometimes the Kitchen; Issue Project Room, the Stone, from time to time Le Pousson Rouge: for “experimental” or “avant-garde” music. And a range of more specifically art-world venues and events. Numina Lente seemed pitched, rather consciously, somewhere in here. It seems significant that it was in Manhattan, in particular—to bring things back together, somehow. (But what things?)

KC: All that you mention here were indeed points of reference. I would add to these Dylan Nyoukis’s Colour out of Space festival in Brighton, Clint Simonson and Matthew St-Germain’s De Stijl/Freedom From Festival in the Twin Cities, and Mike Kelley’s “A Fantastic World Superimposed on Reality” for Performa. It was after attending the latter, and subsequently seeing Lubomyr Melnyk at the Friends Meeting House off Gramercy Park, that we began to formulate the ideas that led to NUMINA lente. This first took shape at “An Evening of Incohative + Centerless Portrayal” at SculptureCenter, which was in itself something of a continuation of a series of events beginning with Yuzo Sakuramoto and Taketo Shimada’s “can we expand MUSIC?” at FiveMyles Gallery and the series of shows Taketo organized around Yoshi Wada’s Pipe Dreams at the Emily Harvey Foundation. In realizing these events, we began to perceive the possibility for something on the scale of NUMINA lente.

SF: My parenthetical above: “But what things?” It’s surprisingly tricky to pin down the performers at NL, and I imagine that’s the point—you used the words nonidiomatic and singular. Is there a unifying logic here outside a mass of singularities? I can start listing genres—comedy, minimalism, noise, blues, improv, cinema-performance, etc., etc.—but they seem somewhat unhelpful, or only a point of departure.

Jay Sanders: Well, one bit of organizing logic was a constraint we gave ourselves—that as much as possible, we wanted to bring performers who wouldn’t be playing New York otherwise. Some, in fact, had never been here. Like Ilitch, an infamous French band going back to the 1970s that had never been to the US before this week. Or Hype Williams, which materialized very recently as a kind of music/media phenomenon. This was their US debut too. We’d never seen these acts and had no idea what they’d do. A high level of unpredictability is something many of the performers shared and something Keith and I are very attracted to. In terms of genre classifications—right, maybe that’s not a very helpful way of identifying what happened with these shows.

SF: Who helped you make this happen? Were any of the logistics especially notable or insane? You mentioned a “network of people in NYC” and the “eccentric resources of the city’s vibrant scene”; and I imagine the kind of networking you and Keith had to do to pull everyone in was a bit different (more or differently eccentric?) than that involved in curating a visual-art show.

SF: Jay, you’re cocurating the next Whitney Biennial. Are you carrying over ideas from NL to that much larger project, either specifically (curation of music/performance) or conceptually: a focus on particularity, singularity, hardness-to-place? (Though it’s funny—as soon as I start writing it out that way, it becomes obvious how much rarer that curatorial approach is in music than it is in art; in art it’s probably just step 1, or at least should be.)

JS: Only time will tell.