Maya Harakawa Our group—a perspectival melting pot—considered publication as an experimental form, a medium with specific roots in histories of the avant garde, conceptualism, literature, and politics. We engaged the language, examples, and questions of mother disciplines whose influences we couldn’t always shake. The magazine is an object of an interdisciplinary nature, and this was something we learned not in theory but in practice. Our conversations revealed not only how varied our own investments were, but allowed us to challenge each other in remarkably productive ways.

Dennis Hogan Sitting around a seminar table in the front room of Triple Canopy’s Greenpoint office, we considered the shape of magazines as they have been and might be. We thought about the magazine’s role in establishing publishing conventions (how does a masthead, a table of contents, or even a long, scrolling block of text create expectations and shape content?) and the magazine as a site of experimental and generative intervention (how does a publication like Aspen or an artwork like Mel Bochner and Robert Smithson’s “The Domain of the Great Bear” disrupt these expectations?). We theorized the possibilities—both exciting and profoundly frightening—opened up by an interfaced, mediated, and technologized world, and we debated the rise of conceptual modes of reading and writing that emphasize surface over depth.

Guest speakers made these inquiries concrete. Writer Tan Lin discussed his attempts to write fiction that produces effects of non-reading, and artist Steffani Jemison discussed literacy as a tool of both enslavement and resistance. Artist Erin Shirreff presented her Triple Canopy project “Shadow, Glare” as an attempt to flatten out the illusory depth of the computer screen. 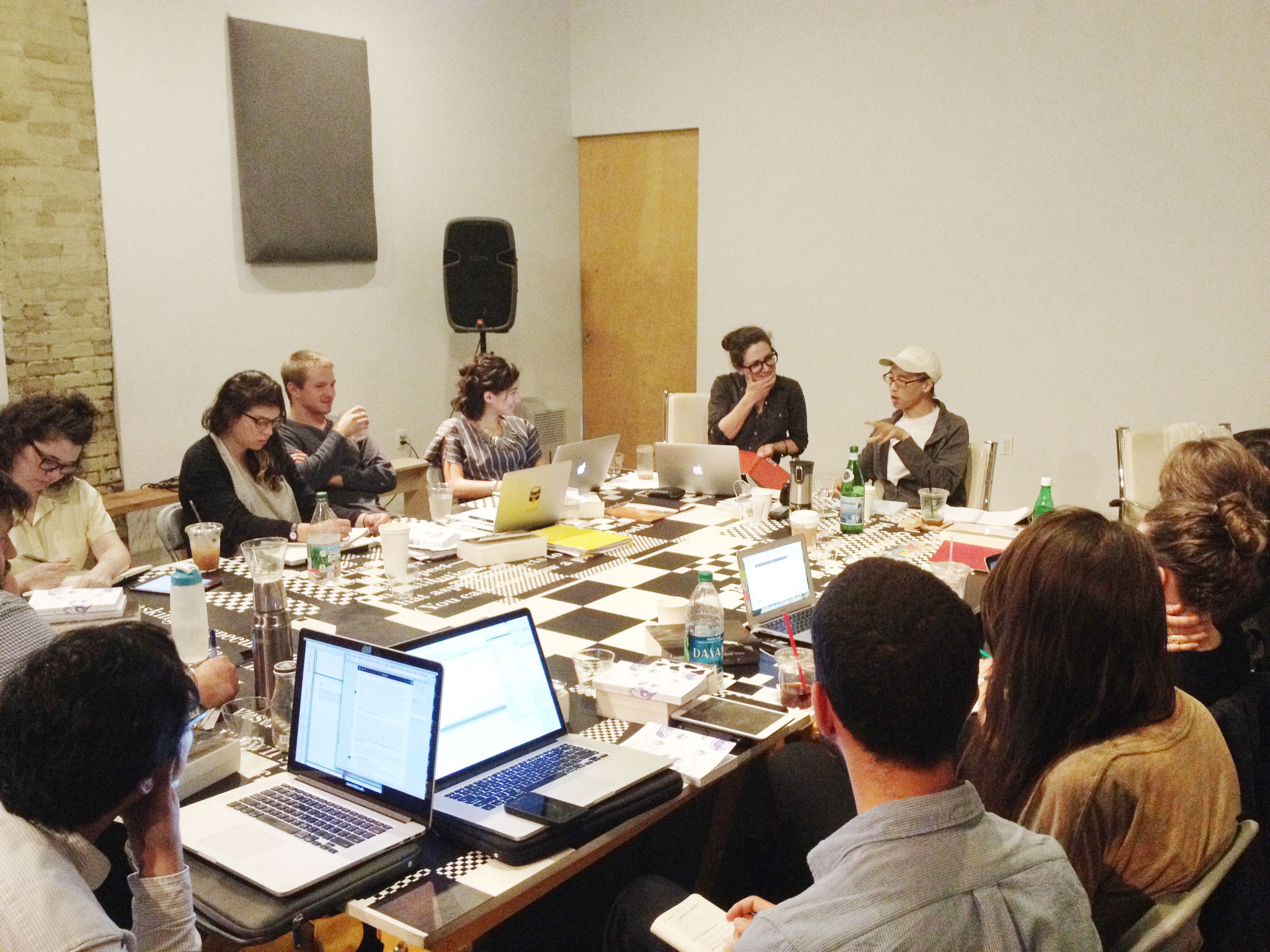 Harakawa We also met throughout the city. We brought our questions and conversations to a graphic design office in Chinatown, to the Jewish Museum, to Chelsea, to a loft in TriBeCa, to the MoMA Library, and to a bar (or two). We talked to Mel Bochner about his magazine interventions and with Max Schumann about the history of indispensible art-book store Printed Matter. Just like the publications we studied, you might say we were un-bounded: We traveled throughout the city and considered the real-world counterparts to our theoretical conversations.

Hogan At the studio of graphic design firm and longtime Triple Canopy collaborators Project Projects, we spoke with designer and gallerist Prem Krishnamurthy; at the office of publisher and archival researcher initiative Boo Hooray, we spoke with proprietor Johan Kugelberg; at Six Decades, we spoke with antiquarian Jeremy Sanders; at David Zwirner gallery, we spoke with publishers Julia Joern and Todd Bradway. These venues offered a glimpse into daily economies and the circulation of artists’ books and other printed materials by and about artists. We were led to ask how one might make a living in publishing and so also considered the intersections of writing, reading, and labor. Can we do our work honestly, in a way that feels true, without being exploited or exploiting others? Do the funding structures of the art or publishing worlds make room for criticism? Do collaborative creative endeavors assuage these concerns or ameliorate these conditions? (We hope so!) 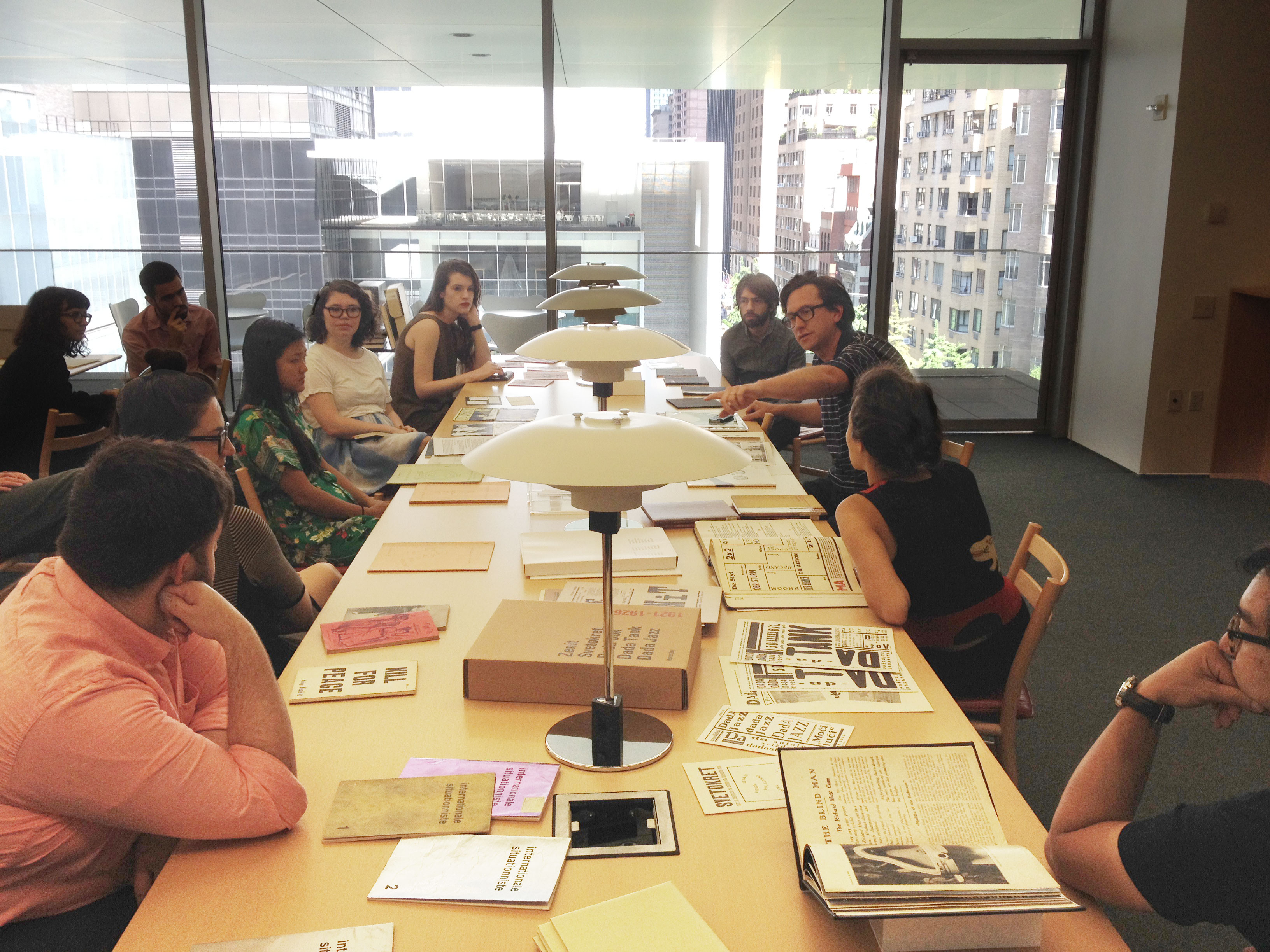 Summer Intensive students discuss an array of artists’ publications, including Fuck You, Aspen, Heresies, and North Drive Press, with bibliographer David Senior at the MoMA Library.

Harakawa Ultimately, our discussions and field trips came to an end, but our expansion has not. We’ve returned home to places as far flung as Austin, London, Minneapolis, Mexico City, and Staten Island, our ideas newly problematized, reconfigured, and emboldened and ready to be set into motion. I don’t want to say that we’re graduates. Instead, we continue to expand—both as a group and as individuals. As the study of artist’s books and publications has become a central concern of my own academic research, I’m particularly aware of the benefits of this expansion. No longer confined to the perspectives of my discipline, or even of academia, I’m excited to ask new questions of my chosen subject.

Hogan The Intensive gave everyone a deeper sense of engagement with the theories and practicalities of publication, both digital and analog, and created a fruitful, interdisciplinary space, making possible the kinds of conversations that Triple Canopy has always made its trademark. For me, these discussions combined the same rigor and thoughtfulness that predominates within the university with a sense of openness to the larger world. Building on this summer’s experience, the group has decided to continue collaborating remotely on a new publishing endeavor: Ski Lipstick, an experimental digital publication inspired by the conversations that took place in June, is scheduled to appear in winter 2015. 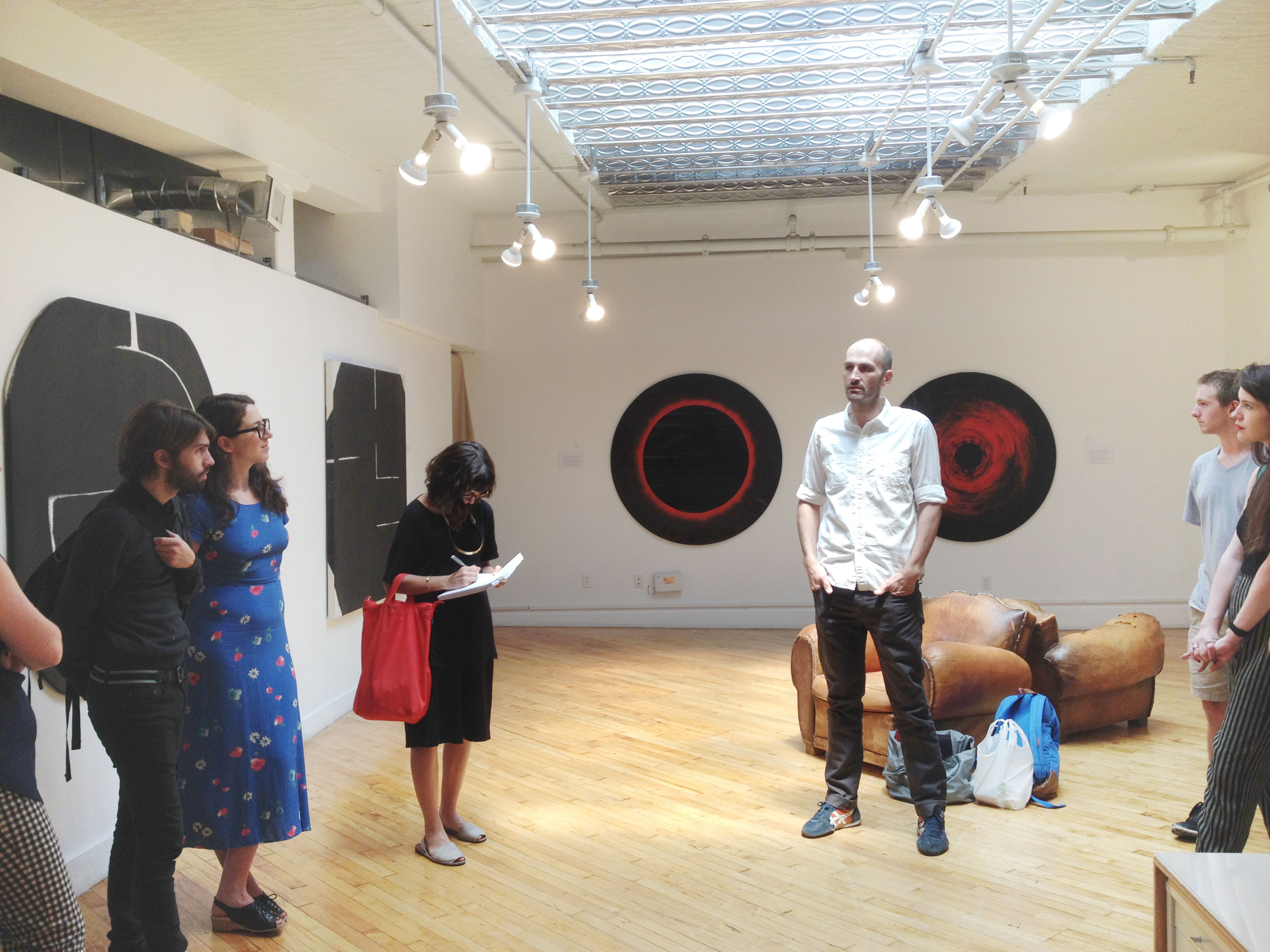 In the Boo Hooray gallery with Johan Kugelberg (not pictured) and Six Decades’ Jeremy Sanders.

Applications for the 2015 Summer Intensive will be announced in the coming months. In the meantime, for information about seminars, lectures, and other initiatives, please visit our education page or write to edu@canopycanopycanopy.com.