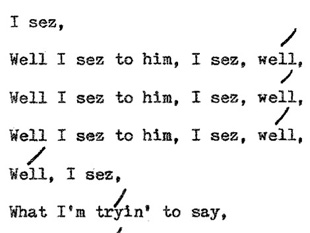 Call this an endnote to a footnote, or a note to self, in advance of this Thursday’s reading at McNally Jackson Books in Manhattan: At 7 p.m. on June 9, Joshua Cohen, Dan Visel, Eileen Myles, Gary Indiana, Jed Perl, and I will be discussing failure, but for now I’d prefer to think about not-failure (which isn’t to say success).

There’s a footnote of my own to this, one thing I can’t incorporate, the one piece of Dad’s writing I like almost unreservedly. In 1978 he wrote “As I Was Saying,” essentially a set of rhythmic variations on its title, Barthelmian dreck-language with a life of its own. Mom set a dance to it, Richard Kostelanetz anthologized it in Text-Sound Texts in 1980, Jaap Blonk recorded it on Speechlos in 1997, Paul Hillier performed it at Carnegie Hall in 2007. “Well I sez to him I sez, / I sez, / Well I sez to him, I sez, well…”

This is the second footnote to “The Document,” my essay for the Review of Contemporary Fiction’s “Failure” issue, and reprinted in issue 11 of Triple Canopy. And this is an iteration of “As I Was Saying,” marked up for performance by my dad, Sheldon Frank. “As I Was Saying” is a small thing: some wit, some rhythm. It’s irrelevant. It wants to be read aloud. It could hardly be called a success: Its stakes are too low. It uses failing language but could hardly itself fail: Its rules are its own.

What I’ll be trying to say on Thursday is that I can’t think of my dad in terms of failure. Certainly, he was no success. But faced with the prospect of failing (or succeeding), anxious, he chose instead to quit, withdraw, refuse, avoid, not-fail. This wasn’t exactly his best quality; and it kept shrinking his life: for his last quarter century, to a tiny apartment in the projects. On the other hand, on his less depressive days, it provided him a certain amount of space to be irrelevant, or free. Here’s an email he wrote my cousin Steve in 2000, after Steve implied that my dad spent all his time on the Internet:

First of all, I spend most of my waking hours outside, working on my game, copping some rays and taking long walks of varying speeds where I check out the world out there and run into a bewildering number of old friends/acquaintances.

1. Got up around 7, took my vitamins and my meds, got the papers.

4. You must remember this (a kiss is just a kiss, a sigh is just a sigh) -- at every appropriate moment I hydrate myself.

5. Left at 10 to take a 30-minute-long uphill walk to the Hudson County Law Library to check out a few things in the New Jersey Administrative Code, plus a few cases in the state’s Appellate Division. Before entering the Hudson County Administration Building, I stopped by a couple of bail bondsmen to get their business cards -- a calculated goof. Stayed about 45 minutes.

6. Took a leisurely downhill stroll home, back home round noon.

16. Heard some music, glanced at some papers, needed to get out.

17. At around 2:00, put my b-ball in my old gym bag, along with gum, lollipops, lozenges, cash, God knows what else, paper and pen to jot down notes to myself, went to the courts at the projects.

18. Took a meandering walk to the courts to continue my ongoing project of re-acquainting my Hispanic and African-American neighbors with the strange white man with gym bag and red bandana.

19. The single functioning court with rim was empty as always, plus very few shards of broken glass from the night before. The sun was behind me and I was bad. Nothing but net, had there been net. (Question: What do you think of half-moon backboards? I grew up playing on rectangular ones and hate half-moons which most places here have. Makes it hard for me to figure the angle on a bank shot.) Played for a half-hour or so, beautiful day.

20. As is my wont, with shirt off to cool down, always play with shirt off to grab rays and feel comfortable, revealing my tattoos of Sam and Goose, gym bag on shoulder, walked slowly where the spirit took me.

21. Walked around the projects and decided to follow the fence protecting the old, still-functioning Conrail line to see if my old holes-in-the fence were still there -- always used to use them as a quick way to climb way up to Jersey City or Union City. Found a one, walked on the ties a bit, needed to find another lest I be cornered, found it, used it, returned to the streets.

22. Unbelievable amount of new construction to observe. Grabbed a hot dog with everything (first meal of the day) for $1.35 at county park, extra napkins, washed down with water.

23. Bought five thingies of CVS-equivalent of Ammen’s powder for $7.50, re-arranged gym bag, walked to public library to check out their holdings on Baudelaire and Frank O’Hara (he’s in my quasi-backpack, not in my gym bag yet).

24. Grabbed four new genre-novels, had trouble with library’s computer, saw a bunch of bookshelves with old, used hardbacks for $.50, paperbacks ten cents, selected 14 hardbacks, 17 paperbacks. Figured out the computer, found one reference to Baudelaire. Grabbing my book bundles, I brought them to desk, first returning genre-novels whence they came. Paid $8.70, gave librarian a ten, almost unable to control my laughter at my own absurdity, told her to use the change for the library’s fund. Checked out Baudelaire, picked up two slim volumes of Baudelaire and Rimbaud, a recently published old play of Beckett’s, a Maurice Blanchot reader. Checked them out, spent ten minutes re-arranging my gym bag and library bags and hoped I could make it home, a distance of two-and-a-half numbered streets, 7 and a half named streets.

31. Played hoops for a half-hour, am absolutely deadly from 15 feet in, still working on the legs and arm extension for longer distances, it will come. As I may have said before, a swoosh beats an organism, anytime, hands down, hands tied.

32. Got my mail which included, to my surprise and delight, an official Guest ID card from the Stevens Institute of Technology Library. Had gotten the Councilman from Stevens' ward to write them a letter requesting ACCESS (the key to life is process and access -- what we want is access to info, access to City Hall, access to skylines and waterfronts and trees and power and, you name it, access is the game) to their decent college library, which has terrific reference resources and copies for ten cents. I did not ask for or need borrowing privileges, it's a great air-conditioned place to hang out in sometimes and does have the basic resources that only a college library has. I just wanted in on the action.

35. As I was saying, in 28, I was wiped at 5:30, so I chilled, showered, watched the local and national news, plus the intro to Jim Lehrer while doing various household janitorial duties, then decided that the weather was much too nice to be indoors and that I hadn’t fixed my waterfront jones (Hoboken has created, in the last couple of years, wonderful public space for access to the Hudson -- you can even touch the water) for the day (need at least one daily fix) so I trod out again, picked up a loaf of Italian bread for $1.00 for dinner and was off to the water where, to my surprise and delight, there was an unscheduled, unannounced concert to celebrate a local builder’s birthday, everyone calls him Pupi, and old friends and acquaintances abounded. I did my hellos and whassups and while a local comedian was doing horrific ethnic-humor, I spotted a black man with a horn by the pier, so I decided to check it out.

36. Now, youngblood, you may or may not know that Sonny Rollins, a monster player and an eccentric of Learian proportions, is famous for practicing for hours after midnight on the Williamsburg Bridge. (And with a couple of exceptions, is far better live than on record; he plays his best without confines and while I may have heard one good but not great Rollins performance, I have heard a bunch of overwhelming ones, where he does solo credenzas of astonishing length and sublimity.) So, thinking of Rollins, I said to the trumpet player, just like Sonny on the bridge, you on a pier and he of course got the reference and we rapped for a half-hour about Sonny’s misadventures, the death of all the old great ones, and trumpeters like Fats Navarro, Clifford Brown, Dizzy, Miles, Freddy Hubbard, and a bunch more and he explained that while a jazzman, he had to earn his bread, like all union musicians, working any gig he could get, that he loved the Hoboken waterfront, that he didn’t even know what kind of music he would be playing tonight but that it wouldn’t be jazz, but that’s cool, there’s no bad music, only bad musicians.

37. Well this ad hoc group named something like “The 747s and the Earth Quakers” had two female co-lead singers, bass, guitar, electric piano/synthesizer, alto and trumpet, and launched into some good funk. Then they made my heart overjoyed with Earth, Wind and Fire’s “September”, annoyed me with Rick James’ “Brick House” and into a nice groove on Sly’s “Dance to the Music” when the power went out, and stayed out for long enough for me to lose interest, so I said goodbye to trumpeter Wayne singing “September” to myself, and, having eaten half the loaf, strolled home, checked out the action on the local serious hoops courts (whose director is a friend) and got back around 9:30.

38. Answered some e-mail, put tuna salad into the other-half of the loaf, wrote the long piece about poetry in doctors’ offices and then got your reply.

See, Steve, what you’ve got to understand is that I use the computer almost exclusively to answer e-mail and to write, in a fugue-like state of absolute engagement, whatever I feel compelled to write and it is literature no matter what you call it, son. And I’m having a ball living my life, which includes writing the best stuff I’ve ever written and getting a phenomenal response from the e-mail gang. So don’t deride what you do not understand. Please excuse the harshness of my tone -- when people make assumptions or presumptions about me they are always wrong and I get a bit huffy when people assume or presume -- I just refuse categorization and am irked when categorized. So, still friends, Steve? Give my love to Beth.

“As I Was Saying” is my favorite of his not-failures (though some of his emails weren’t bad). It’s its own thing, and people, occasionally, keep reading it aloud. Last month, Hillier’s version came out on CD: Stories: Berio and Friends, by Theatre of Voices, on Harmonia Mundi. Today would have been my dad’s sixty-eighth birthday.