Back to School: Report from CAA
Alexander Provan 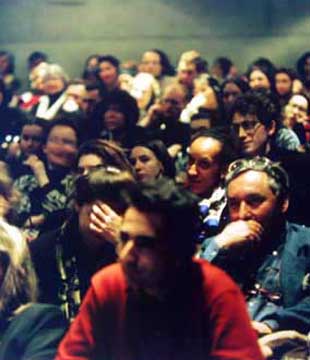 Last week a number of us descended on the College Art Association’s annual melee, where throngs of art historians and hangers-on stalked the halls of the midtown Hilton in search of whichever panel was “hot” this year. There was much speculation about the two-part “Dark Matter of the Art World”—and, later, tepid reviews. “Beyond Participation: Towards Massively Collaborative Worlds of Art” seemed to promise an apotheosis of the dual trends of pedagogical practice and gamer theory but, alas, that turned out to be a mirage.

One favorite was “Prophet/Profit: The Famous Case of Damien Hirst,” in which Sarah Thornton (Seven Days in the Art World), NYU’s Thomas Crow, and others tentatively historicized the aging “bad boy of British art.” Another revived a perennial topic, “The Crisis in Art History.” A standing-room-only crowd of masochists assembled in the Hilton’s incredibly named Rendezvous Trianon, eager to hear distinguished scholars give their diagnoses (and perhaps prognoses). While the other eminences lamented the outsize demand for contemporary studies, Yale’s David Joselit pithily endorsed the “epistemology of search,” a central feature of art in the age of Google.

For our money (OK, egos) the action was at “Are We Standing at a Digital Divide in Art Publishing?” (Or, if not action, pertinence to our CV, which at CAA trumps all else.) Before a full room, editor Joseph Newland introduced the panel with a bit of art-historian-conference humor: “Ricky Gervais couldn’t make it. Apparently he’s more interested in the intellectual-property-law panel—he thought he could put a little English on it.” He proceeded to express his hope that the tablet computer will bridge the gap between digital and print, but tempered that statement by showing old CD-ROM textbooks and discussing Bob Stein’s infamous Voyager project.

What followed was a kind of smorgasbord of approaches to digital publishing. Thomas Lawson, an artist, dean of the art school at CalArts, and former editor of Real Life, gave a tour of his new and promising project, East of Borneo. The “born-digital journal” of Los Angeles art relies in part on reader-workers sharing content to build a dynamic archive; Lawson demonstrated the uploading process (it works!).

Chad Coerver, director of publications, graphic design, and Web at the San Francisco Museum of Modern Art, described himself as “in flux between what I imagine this new world to be and a desperate devotion to the old one.” He discussed his efforts to use the Web to renovate the form of the museum-collection catalogue, showing off elements of a Robert Rauschenberg project packed with images, texts, timelines, and videos dealing with each artwork.

Ken Wissoker of Duke University Press, the only panelist with a Twitter feed, spoke of “how content drives form and form drives content in the digital age”—meaning no more six-hundred-page tomes, a growing awareness of the importance of search terms versus grand arguments, and the possibility that readers will elide catalogues in favor of “making your Rauschenberg playlist the way you would take a bunch of songs and make a mix.” (And there was the seemingly inevitable art-historian humor: “A lot of the best academic books don’t actually contain too much information. No one reads The Return of Martin Guerre to find out if Guerre returns.”)

Finally, Katy Siegel, an art historian at Hunter, Artforum contributing editor, and editor of Art Journal (which recently launched a handsome new website), took the reins. Rather than think of the Web as an immovable object, she suggested we consider it as a flexible medium, one defined “not just by materials but by how you use the materials to solve certain problems.” She noted that the Web has made the language of scholarship more conversational, which may result in “more transparency and exchange between academia and the art world” but may also be the product of “the deprofessionalization of writing and the evisceration of publishing models that support it.”

Lawson compared the crowd-sourcing of content production favorably to the process of peer review, which is “approved by just three bodies” and results in that much-maligned “authoritative voice.”

“You’re not talking about Art Journal, you’re talking about October, I think,” Siegel quipped. She then made the valuable distinction between “a model where you have people going and writing things because they’re amateurs and they’re really obsessed” and a model in which “people are granted the luxury of time to do copious research and professional writing.”

Newland argued that “it’s really good for writing to have more voices” and that we ought to accept what’s happening now, because soon “iPhones will become smart phones and iPads will become tablet computers, and they’ll become available not just to the world’s affluent, which will change the way we think about publishing.”

“I keep hearing about the iPad,” an audience member responded. “Heidegger said technology is a double-edged sword. But when it comes to studying and reading, I still print everything out, even though I love the dream.” I wondered how many times that Heidegger quotation would be invoked over the course of the conference. (Answer: too many.)

Maintaining the Triple Canopy party line, I asked if it might not be worth considering the variety of peoples’ online reading experiences, the fluidity between “users” and “readers,” and the development of forms of scholarship, artwork, and literature that make use of complementary modes of attention.

Coerver responded that SFMOMA is trying to “recognize a variety of readers,” and acknowldged that for all the scholarly interest in new media “the specialist or informed audience is shockingly low.”

Of course, the speakers were all academics or art professionals who had come to the Internet later in life. And regardless of the eponymous digital divide, and whether or not it is bridged, they seemed confident that they would be insulated from the fallout; after all, it is the more precarious class of writers who, lacking institutional support, are increasingly being rebranded as “content producers,” much to their detriment. The real concern is the insolvency of those writers who stand between academics with the luxury of dabbling with new media and the hordes of bloggers and commenters that keep the Internet’s hamster wheel turning.

Siegel noted that, in the process of creating Art Journal’s website, she consulted with Rhizome’s Lauren Cornell. “You know what’s not on the Web?,” she said. “Thoughtful, long-form conversations and writing.” (Cough-Triple-Canopy-cough.)

At which point New York Magazine critic (and social-media phenomenon) Jerry Saltz stepped up to the microphone and offered a flip rejoinder: “There’s nothing on earth—since there’s no money in writing anyway—to stop people from making their own stupid magazine and publishing their own stupid articles. If you build it, they will come.”