Bryan Zanisnik, excerpt from Remembrance of Things Past, 2006.

For his current exhibition at Abrons Arts Center, “Every Inch a Man” (March 30–May 6), artist Bryan Zanisnik spends five hours a day, Thursday through Sunday, inside a Plexiglas booth, reading a copy of Philip Roth’s The Great American Novel (1973) while wearing goggles to protect his eyes from the baseball cards and outdated currency being blown about by the fans installed within the booth’s base. On weekends, his mother brings him lunch. During a reprieve from this durational performance, Zanisnik met with Triple Canopy senior editor Colby Chamberlain to discuss the exhibition’s catalogue, which combines documentation of the artist’s past work with an archive of Zanisnik family photos.

Colby Chamberlain: Your project for Triple Canopy, “Beyond Passaic,” came out of a series of walks you did through the Meadowlands between 2002 and 2007. As you were photographing the Meadowlands, you were becoming better known in New York for your video Remembrance of Things Past (2006), an edited compilation of home videos you made with your grandmother playacting as a World War II soldier. In many ways, this presentation of material from your childhood established the logic for your subsequent work, since your installations and photography incorporate objects culled from your parents’ garage and your parents often participate in your performances.

Bryan Zanisnik: Remembrance of Things Past is about a transgression of family dynamics. First, there was the transgression of thirteen-year-old me dressing my eighty-year-old grandmother as a World War II soldier and asking her to crawl across a basement floor, surrounded by toy guns, leaky tarps, and shelves upon shelves of canned goods. At the time I was not aware that this playacting was allowing me to reverse the usual direction of authority in the relationship. I had just seen films by Kubrick and Scorsese for the first time and wanted to create my own gangster and war narratives. My family was readily available so it was natural to include them.

Second, there was the transgression of exhibiting these works in a public setting. When I first began reediting the grandmother footage in 2006, I told my parents that I was planning on screening it in New York. My mother begged me not to. She felt they were made for private audiences: We would screen them in the living room. My mother said, “We don’t know how they will make us look.” Once the works were shown, my parents proved quite comfortable with the reception, which is what allowed me to collaborate with them so extensively in subsequent work. At the outset, however, screening the video felt transgressive to them—a public exposure of private activities from my childhood and my parents’ past. 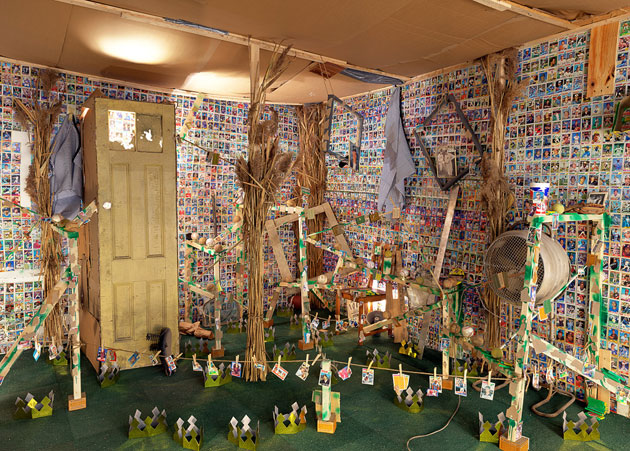 CC: In the catalogue for your current exhibition, both essayists, David Everitt Howe and Wendy Vogel, make reference to the recently departed Mike Kelley. Mostly they’re invoking Kelley in relation to your self-debasing, “beta-male” performances—the pose of artist as adolescent or ’90s-centric discussions of abjection. I’d like to take that comparison further. What interests me about Kelley was his insistence on mining very specific vernacular cultures, like working-class Detroit. Considering how much your work pulls—literally and metaphorically—from your parents’ basement in Springfield, New Jersey, you seem to share that impulse. How are you positioning your work in relation to culture and class?

BZ: The objects I use en masse—like baseball cards and comic books—come out of a culture of collecting. It’s a postwar suburban hobby handed down to me by my father. He liked to tell me how, as a small boy in the 1950s, he had a 1952 Mickey Mantle rookie card that he put in the spokes of his bicycle—casually destroying something that, today, is incredibly valuable. He told me stories like this whenever we visited baseball card fairs and comic book conventions. These trips were father-son bonding opportunities, but they also reflected a set of distinctly middle-class, suburban values. The most desired cards were the rarest. The whole thing was an early lesson in capitalism. What’s interesting in hindsight is that, while certain cards have retained their value, the majority of the cards that we collected, even ones that we paid a significant amount of money for, are now worthless. Thanks to eBay, it’s now clear that most cards are not as rare as was once believed. No one goes from town to town, convention to convention anymore. That culture of collecting is gone.

However, even if those cards no longer remain valuable, they remain significant. Childhood memory is inseparable from its ancillary objects—tokens of youth like trophies and comic books. I had a peculiar realization while building the set for my photograph 18 Years of American Dreams (2010), which incorporated thousands of baseball cards from my childhood. I was looking at this collection for the first time in probably twenty years, yet when I picked up individual cards I could remember all sorts of details: which position in the outfield someone played, which year he made the All-Star team. This physical interaction stirred up dormant long-term memories. From that point on, I began conceiving of these sets and installations as physical manifestations of childhood memory—albeit ones structured by commodity culture. It’s the visual and tactile qualities of these consumer objects that activate a set of memories for me and hopefully for others as well.

CC: The majority of your new catalogue is given over to a photo essay that pairs documentation of your work from the past five years with family photos from the 1970s and ’80s. The juxtapositions resonate strongly, and in several instances it’s clear that your artworks draw directly from that archive of family memories. Your selection is dominated by photographs taken at sites of leisure—more specifically, sites of low-grade simulation, like the Gingerbread Castle in Hamburg, New Jersey, and a plastic-llama bouncy ride outside the South of the Border rest stop. Obviously these sites are typical family photo opportunities, but why are they so prevalent in the catalogue’s selection?

BZ: I’m interested in these schlocky, marginalized places of leisure because they’re disappearing. Two years ago, I went to Englewood, New Jersey, to the site of Gordon Matta-Clark’s Splitting (1974), the house he cut in half. Now it’s a parking lot for a luxury Italian clothing manufacturer. Whether it is art locales or fairgrounds, the idiosyncrasies of culture are getting paved over. The Gingerbread Castle in Hamburg is long gone. At the Morris Museum, the taxidermied animals and dusty fossil displays have been superseded by animatronic dolls and brightly lit interiors.

When I was nineteen, I worked at a roadside carnival called Bowcraft in Scotch Plains. People were shocked when I said I worked there, since it had a reputation for children getting hurt on the rides. One child was thrown off the Ferris wheel, another was trapped on the Tilt-a-Whirl. I was trained to operate rides that had fake emergency stop buttons. Places like that have fallen away, and maybe there’s something to be said for amusement parks that are more corporate and better regulated. But there’s something lost: the uncanny. I remember being creeped out by the life-size plastic figures in the middle of the children’s racetrack. The figures felt familiar but out of time—one was of a Native American, another of a cowboy. I think about this tension between the familiar and the foreign in relation to my current work. The uncanny is important because it puts us in touch with a very primitive aspect of being human, namely seeing inanimate objects as possessing life. The uncanny momentarily allows us to experience an animistic conception of the universe. Whether at Bowcraft or in one of my installations, these outmoded objects feel haunted; they point to the psychic dimensions of suburban life that normally we repress. As Freud pointed out, unheimliche, the German word for “uncanny,” can also be translated as “un-home-like.”