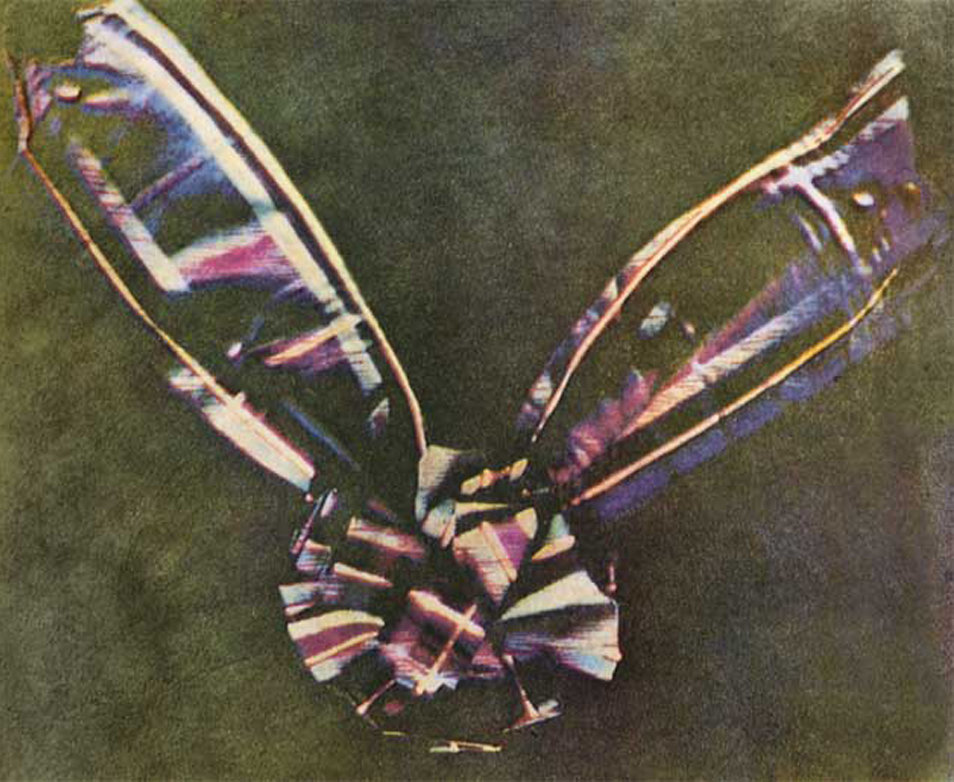 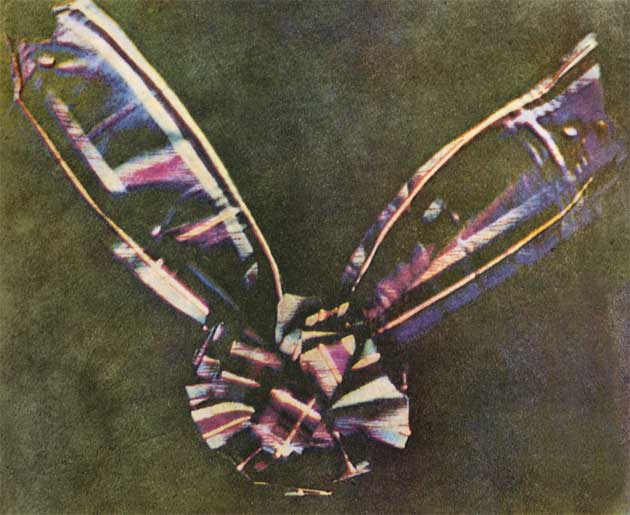 Tartan ribbon depicted in the first photograph made by the three-color method, by James Clerk Maxwell (1831–1879).


There is a "reason why all works of art of others may be imitated for public sale, but books, which have their editor already put in possession, dare not be counterfeited,” according to Immanuel Kant’s Essays and Treatises on Moral, Political, and Various Philosophical Subjects (1798). “The former are works (opera), the latter acts (opera), those may be as things existing of themselves, but these can have their existence but in a person." Nick Relph, a British artist based in New York City, quotes these lines last year in a print edition titled "On the Injustices of Counterfeiting Books." This year, Relph published Vestiarium Scoticum (KLTB, 2010), a visual index of tartans—patterns traditionally used in Scottish kilts—originally compiled by John Sobieski Stuart and Charles Edward Stuart in 1842. The brothers falsely claimed their book to be a reprint of a sixteenth-century manuscript, and to provide proof of the historical connection between specific tartans and family clans. The book’s connections are still regarded as authentic by the Scottish textile industry and clan members alike. Here Relph discusses his work with Triple Canopy editorial and program director Peter J. Russo.

Peter J. Russo: In a text accompanying your 2010 show at Gavin Brown Enterprise, “A List of Incorrect Things", you recount various attempts to systematize, and thus monetize, color: the harvesting of indigo, the dyers’ guild system built upon the demand for indigo in Europe, and Scottish physicist James Clerk Maxwell’s research into color perception, which led to color photography. Your story ends—for now—with the pollution of Newtown Creek and the Gowanus Canal, both in Brooklyn, in part by American dye companies. How does this history relate to your work with contemporary design, be it 3M tape, Ellsworth Kelly paintings, or Commes des Garçons?

Nick Relph: I think color is something we more or less take for granted. The terrific amount of work that went into color becoming standardized and widely available seems to have been forgotten, which isn’t all that surprising. It tends not to be thought about critically all that much—people seem increasingly aware of the various devices used to sell or communicate—marketing, logos—but color is still often thought of as “just there.” But it’s taken incredibly seriously from a corporate perspective. A particular shade will be chosen, after much discussion, because it’s felt to accurately convey the appropriate message in relation to a given product. In this sense color is a language. Two things in particular interest me about that: First, to use this language means, sooner or later, having to engage with the corporatized and nationalized bodies that facilitate the production and distribution of color. By these I mean color management systems: the various national standards and color spaces, such as Pantone, RAL, and the Munsell color system. Second, this attempt to claim, reify, and attribute meaning to color is kind of doomed from the start. Color is a neurobiological phenomenon, a human response to the world but not of the world as such. It doesn’t really exist outside of ourselves. So color, like meaning, is a human construct, and vulnerable to the same fallacies.

With regards to my own work, I think the root is trying to think about why certain things are attractive to me, and the influence color has on that appeal. Of course there are only so many colors (or so many names for them); some of the overlaps and shared usages are interesting, and provide a good way to talk about the relationships between, for instance, in my film Thre Stryppis Quhite Upon ane Blak Field, an artist and a fashion designer, the history of a textile and additive color technologies.

PJR: Your version of the Vestiarium Scoticum makes you one of three or four authors of the book; the fourth being Celtus, author of the book's Wikipedia page, whom you credit on your book’s cover. What’s your interest in how the authorship of the book—its status and value—have changed over time, and how does that resonate with your other work?

NR: I came across the Vestiarium Scoticum while doing research for the show at Gavin Brown last year. I was interested in how the “original” book could be considered a real attempt to provide a standardized record of the color information of tartans for future generations. Previous attempts to do this had been unreliable; until later in the nineteenth century, fabric swatches kept for reference tended to be dyed with natural, and often fugitive, dye, which would often fade or discolor over time. The other thing that drew me to the book was that, in making a connection between a tartan and a clan (a link which hadn’t really existed previously), the authors imbue these essentially abstract arrangements of color with meaning. To convince people of this meaning they mapped an elaborate history for the book, claiming it was sourced from ancient documents and so on, and created fantastic identities for themselves. I’m naturally drawn to English liars. My current show at Standard in Oslo is the start of an attempt to try and work out where I sit between the “freedom” of making art and the authority it tries to impose, the handmade and the manufactured, the non-standard and the standard (pun intended).

PJR: In “A List of Incorrect Things,” you mention that the brothers printed the Vestiarium Scoticum using Mauchline machine painting; the tartans available on Wikipedia were anonymously authored online; your version of the book was printed using a Risograph, a kind of digital mimeograph. This lineage points to the way technologies determine the way we receive images and process the historical record at any given time.

NR: The Mauchline system was pretty sophisticated for its time, a kind of proto-industrial image-making process designed to mimic tartan, which at time of the book’s publication was already being produced mechanically. The technique was almost entirely devoted to churning out national merchandising in the form of knick-knacks and trinkets. The Risograph, as far as I can tell, is a strange niche product apparently used to make small bulletins for church groups and the like, which has been used quite a bit recently to print artists’ books and periodicals, most of which are probably designed on a computer, the screens of which of course employ the RGB color-mixing system. So they’re all quite different in their histories and applications, but all equally unreliable!

For printing Vestiarium Scoticum, it made a lot of sense to use the Risograph—the quality of the print is kind of soft and imperfect, and often inescapably retro-looking. Which is kind of seductive and repulsive at the same time. There’s a kind of ambiguity or even dishonesty about it, which makes it perfect.

PJR: These ideas seem to animate your print On the Injustices of Counterfeiting Books, which is derived from the Google Books version of a collection of writing by Immanuel Kant. The same could be said of Something About Detroit, your project included in the April issue of Frieze, a kind of scrapbook essay on concept cars, dying Detroit industries, and techno that is handmade but also but also visually references mass production.

NR: The decision to make the Something About Detroit piece on a color Xerox was twofold. The first reason was purely practical—I wanted to use a lot of images and it just seemed like a big chore to get permission for them all. Copying them and making them single-color means they kind of slip away from their original form (or the form in which I found them), both perceptually and (I hope) legally. The other line of thinking was that since the text itself concerned the handmade object within the context of an industry, albeit a shrinking one, there was a logic in presenting the text and images as having been clearly arranged and printed “by hand” (the Xerox still being a machine after all). And then those four pages of unique handmade paper, having been fed through the copier dozens of times, all buckled and torn, got scanned in and were subjected to a kind of transformation of medium and context that hopefully acted as an analogue to what was being discussed in the text.