From March 3 to May 27, artist Zoe Beloff and a rotating team of performers have been rehearsing scenes from Bertolt Brecht’s The Days of the Commune in and around Zuccotti Park and other public spaces in New York City. Triple Canopy’s Jessica Lee and Kathryn Sonnabend spoke to Beloff, whose “Bodies Against Time” appeared in issue 15 of Triple Canopy. They discussed the process of adapting Brecht’s play, the artist’s role in a contemporary occupation, and what Occupy can learn from the Paris Commune.

Kathryn Sonnabend: How did you come to choose The Days of the Commune?

Zoe Beloff: I have long been interested in utopian societies, small groups of people who take it upon themselves to change their world. When protesters occupied Zuccotti Park last September, I thought, “Oh my god, here’s a utopian society right down the street from me! I better get down there.” Although I was present at Zuccotti often, I wasn’t fully participating; I didn’t really know how to. I felt like a spectator, an outsider. At the same time, I had recently read a long biography of Brecht and discovered his play The Days of the Commune. I knew there was a relationship between OWS and the Paris Commune, and it seemed like something that should be talked about. I saw that what I can bring to the movement as an artist is the ability to reanimate the past in a way that might help us think about the future.

Jessica Lee: You’ve now been performing The Days of the Commune in New York City public spaces for nearly two months. What relationships have you found between the play’s themes and current conversations about Occupy Wall Street, and how do you communicate those relationships to the public?

ZB: I think of this performance as a political gesture. When I read about the Communards trying to set up this autonomous, democratic occupation of Paris, I discovered they weren’t professional politicians. They were journalists, artists, tradespeople, and engineers. I think of the Paris Commune as the first great modern occupation. When I was talking to some people at OWS, they were like, “That’s really interesting. We’ve never heard of the Paris Commune.” I feel that people should know their own history. So that became another impetus for the project. The Commune pioneered so many progressive reforms: Its members believed that education should be free, that no one should go homeless while houses stood vacant.

Another thing that’s really great about this play is the ensemble cast. The play has no heroes or heroines—not in the conventional sense. It’s about a group of people working together, which the Commune very much was, too. There were no stars of the Paris Commune. It was very much a leaderless revolution.

I like the fact that the play is full of questions that we haven’t yet answered. What do you do when you’ve formed this democracy, but it’s under an incredible threat? Do you take up arms to defend yourselves, or do you proceed through legal channels? Do you occupy the banks? Those were the big questions that the Commune asked. The Commune was fundamentally nonviolent until the very end, when the occupiers felt they had to defend themselves. And it ended terribly: Thirty thousand Communards were massacred. Of course, Lenin thought the Communards should have been violent from the start. That’s what he learned from the Commune. I think that’s the wrong lesson. I think we should celebrate the democratic aspect of the Commune even though, in the end, it did not last. I think it can last yet—and it should! 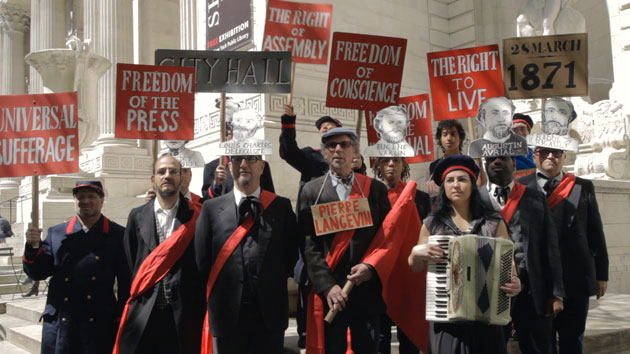 KS: You spent the first few weeks performing in Zuccotti Park. More recently, the locations have been less politically charged and more pinned to locations or themes in the play. Has the meaning of the greater project shifted since the performance began roaming? If the performance as a whole is the “political gesture,” to what extent is it actively—or only thematically—political?

ZB: I think the locations outside of Zuccotti Park are charged in a similarly political and positive way. For example, in scenes where the delegates to the Commune meet and argue about the limits of nonviolence, the action takes place outside the public library on Forty-Second Street. I see the research library as a great center of learning that is open to all, free of charge. This is very much in the spirit of the Commune. Similarly, we staged the scenes of the working people in Place Pigalle in a community garden on Sixth Street and Avenue B [see video above]. Community gardens and allotments are an important part of working class life, allowing people who can’t afford fancy homes to have their own green space. Both venues have chairs and tables, which is very nice for an audience.

Is the project actively political? I don’t believe in telling people what to do. Much more important is to inspire people to ask questions. Brecht wanted audience members to think for themselves. For a moment in history the Communards occupied Paris. Can we imagine what would happen if a new kind of people’s democracy took over a city today? This is a question that occupations around the world must ask.

KS: How have the performers generally come to be involved in the project?

ZB: I didn’t cast this in a normal way, by only auditioning professional actors. I also looked for people who had the desire to do this. I was hoping for diversity because I wanted the Communards to represent all of New York today—old and young, people from different ethnic backgrounds, people of different sexual orientations, a whole range of people. And, happily, this is indeed the makeup of our Commune. One or two people left but many more have joined, including families with small children.

JL: The Paris Commune lasted from March until May of 1871. Was that the main factor in scheduling performances and recordings in smaller segments over a series of weeks, during roughly the same time of year?

ZB: I knew I couldn’t afford to work with people full-time. We all have day jobs. So I came quickly to the idea that we would meet on weekends. We would work through the script scene by scene in public spaces rather than rehearse for three months and put on a fully formed play in a theater. When you’re out there in the street, you’re interacting with the world of today. Rather than make this all about the past, I wanted to make it an eruption of the past into the present.

I didn’t just want to create a spectacle to look at. I wanted to engage in a process and to work. I think of myself as an instigator and facilitator rather than a director and prop maker. I organize the day-by-day framework within which the project unfolds. And I called the project The Days of the Commune: A Work in Progress so that people understand it as a practice. This title also suggests that we are working towards a commune yet to come.

To some people, our performance might look unpolished. Not all the performers have the time to learn their lines by heart. I believe that you should just do what you can with the time you have. Right now we’re in the middle of the play, but even at the end I will see it as something unfinished. I don’t know how to change the world, but I feel that to change things one must first learn—and we are all learning through working together.

JL: You have written that this performance is part of a “larger work,” a sum of the smaller rehearsals and scenes. What role does documentation play in this project? And how do you intend to represent or translate this piece into other formats and venues?

ZB: Documenting the project is really important to me because I think most people will probably see it online, rather than on the street. Ultimately, I see it as a long-form video with interstices between the scenes, in which I film the characters—the Communards—in their costumes but going about their daily lives: getting on a bus, in a grocery store. To show that the spirit of the Commune still lives among us.

When I present the project in the future, I will display the documentation along other things like cardboard props, my drawings from Zuccotti Park, and the broadsheets that we hand out at the performances, which offer some contextual information about the Commune and Brecht’s ideas. There will be signs, papers, and banners everywhere, as if a protest has just ended, or is waiting to begin. 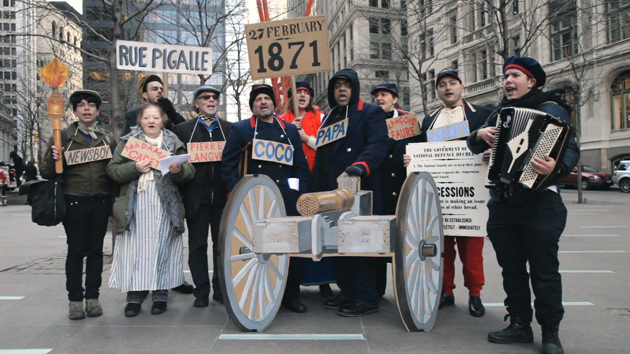