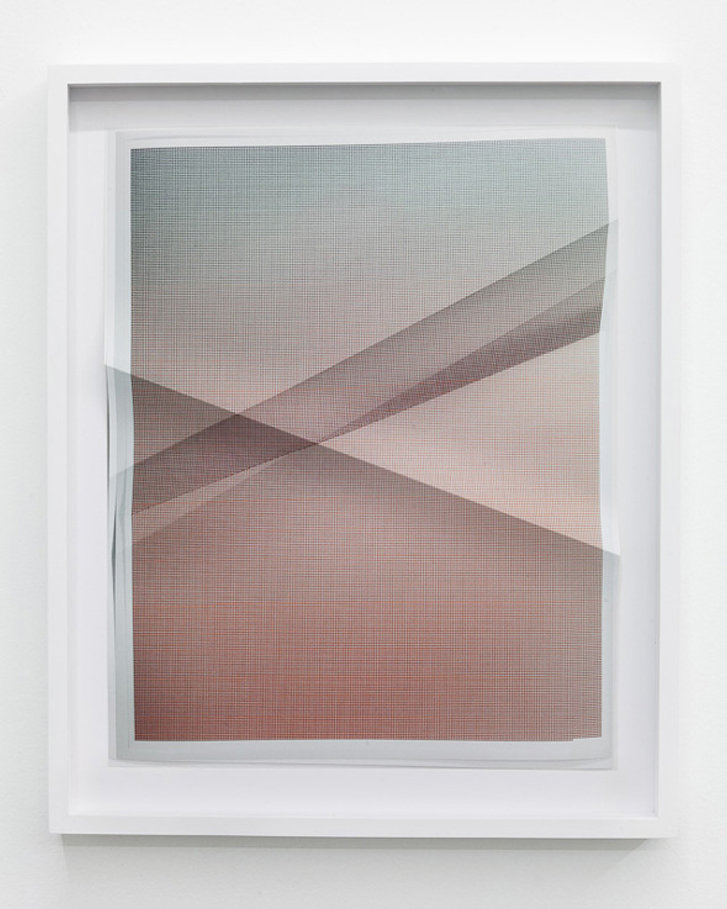 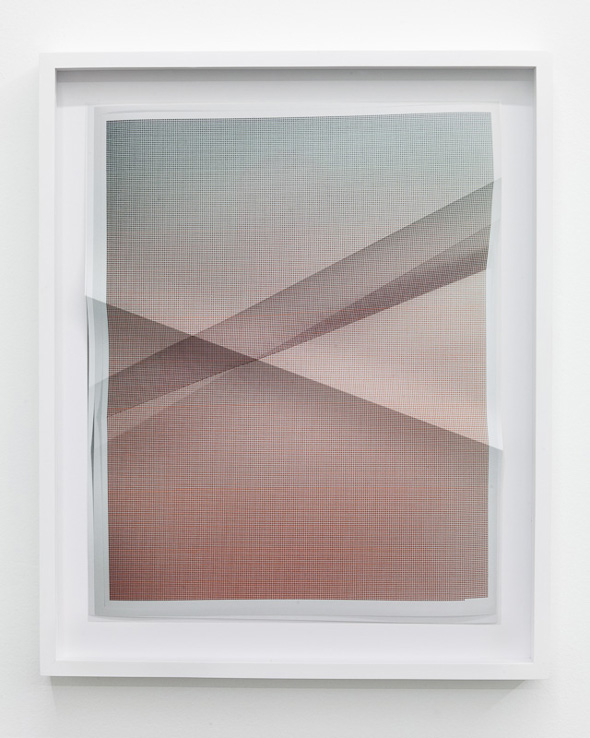 This annotation is part of a series related to Triple Canopy’s twelfth issue, Black Box, which considered how photography is being reframed online. John Houck uses photography and sculpture to produce work that functions as both image and object. His 2011 series titled “Aggregates” was recently on view at Kate Werble Gallery in downtown Manhattan, and this fall he will have a solo show at Franklin Art Works in Minneapolis. Here Houck speaks with photographer Matthew Porter. As in his three artist interviews in Black Box, Porter uses a single image—65,535 combinations of a 4x4 grid, 2 colors - 8E8888, FB7454—to initiate a larger conversation.

Matthew Porter: Your photograph 19,682 combinations of a 3x3 grid, 3 colors - B1D2D3, 6F9DA2, E83C2C is part of a series titled “Aggregates” (2011) that comprises six relatively small, digitally printed grids striated with fold marks and mounted in white frames. At fifteen by eighteen inches, the works in this series are relatively modest in size. Were you thinking about the resolution of the ink-jet printer? Or was it the gesture of the folds that determined the size of the works?

John Houck: The size of the photographs in “Aggregates” was determined by what could fit into a single frame of my camera. The process of making them starts with software that I wrote. I can specify how many rows and columns compose a grid and select any number of colors to fill it. For example, a grid with four rows, four columns, and two colors results in 65,535 combinations (hence the title of the photograph). I then use another piece of self-authored software to output the combinations as an index print on a single sheet of paper using an ink-jet printer. (No commercially available software can do this.) I then crease the paper, light it in a studio, and photograph it from above. I repeat this process three or four times: printing, creasing, and rephotographing. The final print is shown with one or two real creases, and the traces of earlier creases remain as photographic representations. I found that when the paper was too large, I had to take multiple photos, then stitch them all back together digitally; but at fifteen by eighteen inches a single frame would do.

MP: A lot of your work deals with grids and pixels—images made up of adjacent squares. The illusion of a continuous-tone image can result from cramming pixels into a square inch. What if the visual architecture of digital images were to change, and the pixel took on a variable shape? I’m thinking specifically of the recent developments made by Russell Kirsch, the scientist who in 1957 gave us the first digital photograph and the square pixel. Last year, at age eighty-one, he published his recent experiments with contrast masks to create pixels of different shapes.

JH: The ontological basis of a digital image is a two-dimensional array or grid, and I’m not sure that will change. There is a lot of confusion around Russell Kirsch’s masking technique. As I understand it, he isn’t proposing some new structure behind the image—it’s really just a compression algorithm. Ultimately ,the image still starts with a two-dimensional array of pixel data, and that array, at least conceptually, will always be square. 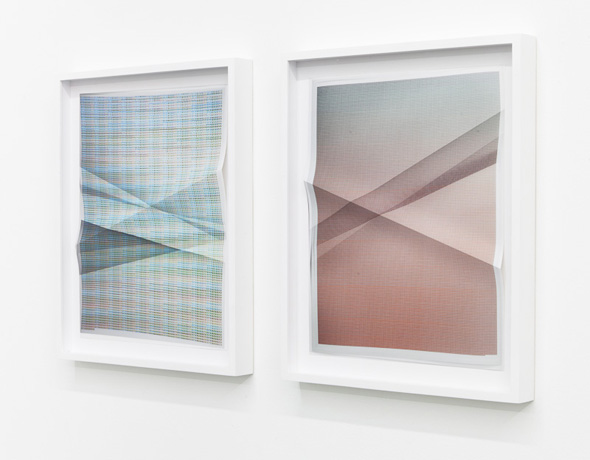 MP: The results of your “Aggregates” series are similar to Kirsch’s images. In some cases you have a diagonal line bisecting a square, with the fold acting as a mask.

JH: What is most interesting about Kirsch’s algorithm are the responses it evokes. People react strongly to the idea that there could be a different shape for a pixel. I see it as part of a wish to humanize the computer or make it more natural in some way. This is part of the reason I started to fold these overly rational contact sheets of grid patterns in my “Aggregates” series. I wanted to reclaim digital photography from what I see as an otherwise highly rational system by juxtaposing it with an intuitive model of the fold.

MP: If I’m not mistaken, a pixel has no real-world dimension until we apply an output size—it’s simply a visual representation of code and its dimensions are variable. A red square with a resolution of one could be forty feet high, and to print that pixel, the output device would determine a new resolution matrix.

JH: That’s correct. A pixel is an abstract container that holds a value capable of being translated into any physical size. Of course, making it physical brings about certain material contingencies. I became interested in the structure that the camera overlays in the process of rephotographing. In certain of the “Aggregates” photographs the cells of the grid are really small, and some have more than fifty thousand color combinations. In these instances the camera sensor has trouble making out the edges of such a fine grid, and in turn creates a moiré pattern, which causes a cyan or magenta fringe at the edges of the gridlines. As I rephotograph and reprint the sheet, the fringe builds into a layer of color imposed by the camera itself. For me, the errors that occur as this rational system of computation breaks down offer some interesting possibilities.

MP: It sounds like you're forcing the camera to fail. The camera's sensor converts light to voltage, color information is determined by the camera's internal computer, and a process often described as "demosaicing" creates the pixels that we see in a bitmap digital file. The process of making the “Aggregates” photographs involves creating grids and converting them into binary information multiple times—from camera sensor to screen to print. I find it dizzying.

JH: Indeed, there is a dizzying amount of repetition in the process. And as you point out, the index of binary data transforms easily. Unlike analog photography, the image is now backed by a language, or code. It’s an obtuse and abstract language, but it’s one that facilitates the distribution, compression, and transmutation of the photograph in a way that wasn’t possible with chemical photography. Yet along with this newfound flexibility, we see another shift: The index is no longer the material thing we once thought it was. Many people—Laura Mulvey, Tom Gunning, and Lev Manovich, for example—would say that photography is now a subgenre of painting in that an original image is combined with and transformed by all sorts of other digital marks.

MP: A convincing argument exists that digital photography is in fact more indexical than its analog counterpart. The reasoning has to do with the fact that a pixel is made up of numbers, or bits, that collectively act as an index. That they lack the iconicity of an analog image is what makes them truly indexical—there is no latent image; the information is stored as code. To quote Tom Gunning, “An index need not (and frequently does not) resemble the thing it represents.” You’re an artist who seems to be comfortable blending analog and digital techniques and materials in your photographs, so I wonder how much these kinds of distinctions influence your work.

JH: I have been thinking more about the din of digital noise than the finer points of the index. The philosopher Bernard Stiegler addresses this in a compelling way. Stiegler argues that new technologies have brought about a fall in desire—or the life-affirming aspects of our libido—that corresponds to a reorganization of our energy into purely machinic drives. This is an oversimplification, but highly repetitive tasks like checking your email a hundred times a day result in a waning of desire. I’m most interested in how one can reclaim desire and cultivate consideration in a time dominated by technical media. For me, art is a way to provide an intensified form of attention that runs counter to our daily experience.

MP: This makes me think of some of your more representational works, like R/MQ1 Model (Predator Drone Constructed Anachronistically) (2010). It’s a photograph of a basswood scale model that you built using information derived from 3-D modeling software. By photographing it on a white background, you’ve made the scale of the model difficult to determine.

JH: The indeterminate scale is a trick from my studies in architecture. We used to build tiny study models, then photograph them and print the images large, playing with the misconception that seeing a three-dimensional object is inherently more of an embodied experience than seeing an image of the same object. The drone you refer to—constructed in the outmoded, anachronistic form of a model airplane—is both monumental and diminutive because of the ambivalent scale. Presented as product photography, the work depicts a weapon now synonymous with the US military-industrial complex as a hobbyist project.

But there is also a sense of nostalgia in this photograph: Growing up, I loved building model airplanes. Of course, it wasn’t until much later that I fully understood the way they functioned as propaganda. The term nostalgia has a fascinating etymology, by the way. Originally, it was synonymous with homesickness and referred to a commonly diagnosed illness in soldiers; as late as the American Civil War, sufferers were discharged and sent home. To bring this back to my work: I think I feel nostalgic toward handmade things in general. Perhaps this partially explains why in my more recent work I’ve been folding photographic prints, and why I took the time to construct the Predator Drone as a basswood model. 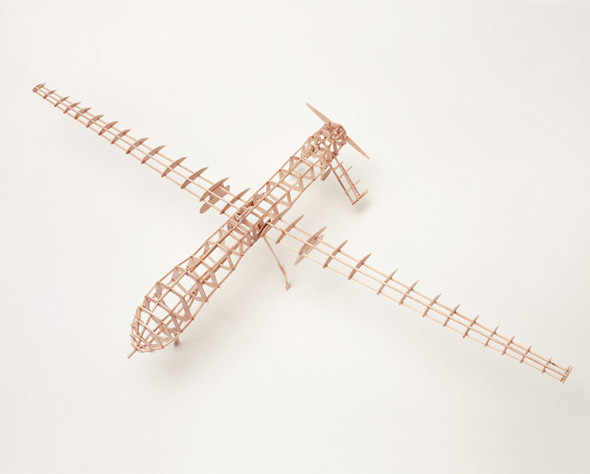