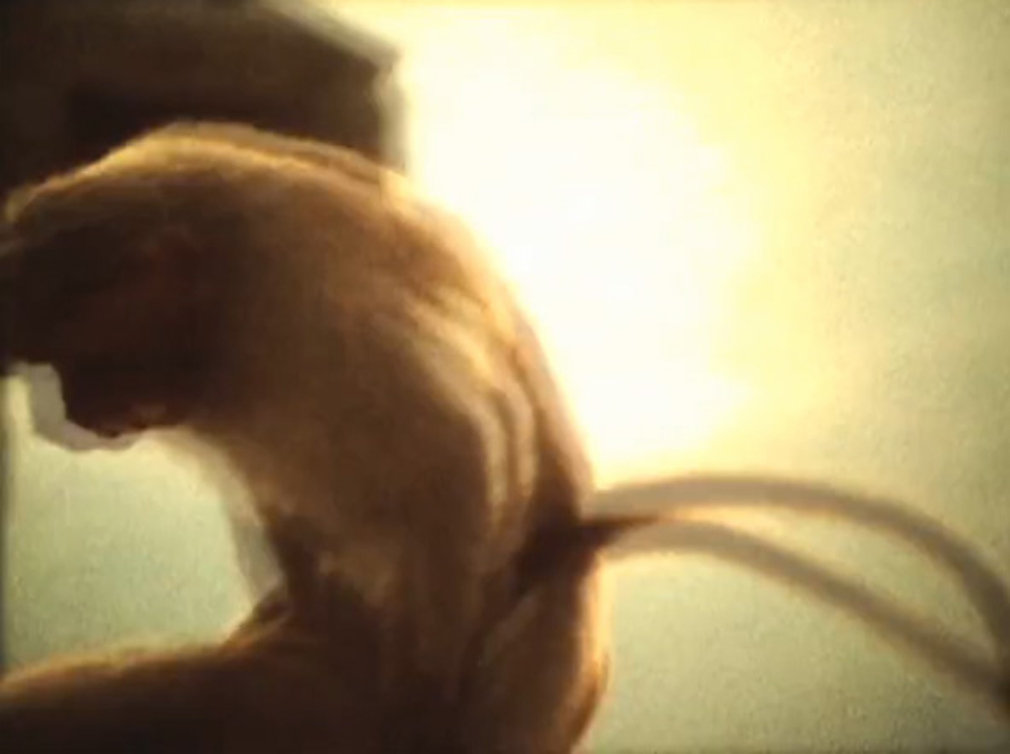 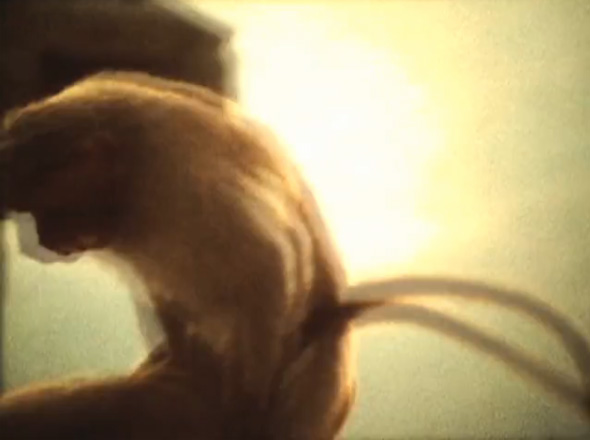 A still from Karthik Pandian's video in "Sacrifice of the Banana," 2010.

A year and a half ago, Triple Canopy published a work by artist Karthik Pandian called "Sacrifice of the Banana." The project consists of a six-minute film shot in Thanjavur, India, two quotes, and a few highly saturated photographs: a pair of stiff and hairy monkey sculptures facing off against a wall drenched in aqua; a cluster of spotted bananas against speckled stone; a billboard featuring a woman with two mouths and four eyes. It’s about color as much as anything else. The first quote, which precedes the film, is a George Bataille line swimming in a bright yellow and orange bath: “Every animal is in the world like water in water.” The sentence is sort of an epigraph to what follows, and sort of continuous with it. It’s from an essay in which Bataille claims that what defines the animal is immanence—the animal does not experience itself as a subject separate from a world of objects.

Pandian’s film begins with a monkey swatting at a human hand extending a banana. A bell clangs at regular intervals over drumbeats while an elephant, human faces, a woman pulling her shirt down amid a crowd, Brihadishwara Temple, and bursts of golden and amber light repeat kaleidoscopically. As new movements are introduced, earlier pictures become transparent floating layers. There are flashes of mining equipment at, I presume, Keelavalavu, where, another quote tells us, the granite company PRP Exports extracts its most popular colors of stone. (The “Big Temple,” which is about 1,002 years old, was the first temple to be made completely out of granite.) There are monkeys copulating. The last minute is silent.

Bataille’s essay on animality doesn’t have anything to say about copulation, but it has a lot to say about eating. Immanence turns out to be all about eating: It means that the animal who eats does not experience the animal who is eaten as object or subordinate to her, and that the animal who is eaten does not experience the animal who eats as superior. The organism is interpenetrated by her environment, as well as by the other organisms in it. Being eaten is “only a disappearance in a world where nothing is posited beyond the present.” Animals, that is, do not live in time like humans do. Each moment is all-consuming.

Presumably this applies to bananas as well as to living flesh: no duration, no intention, no desire—nothing posited beyond the present—and, necessarily, no language. Then again, there are animals and then there are animals. A frog may be in the world like water in water—is a dog? What about a bonobo? A sperm whale? A chimpanzee? Peter Singer observed—in reference to Project Nim, the recent documentary about an attempt to teach a chimpanzee sign language in the 1970s—that in at least one experiment, chimps have made signs that inquire about the future. “Chimpanzees, gorillas, bonobos and orangutans are self-aware beings, capable of thought, and with rich and deep emotional lives,” he wrote. But what does that mean? Does a chimpanzee who opens a rotten banana look around at her fellow chimps enjoying ripe fruit and stand back and say, “Why is it that I, of all chimpanzees, have suffered the fate and misfortune of this rotten banana? Why must I, of all chimpanzees, suffer and one day die?” Surely humans are the only monkeys with the capacity for self-pity. Are we also the only ones who get bored?

The copulating monkeys in “Sacrifice of the Banana” are a lower form than Singer’s stately crew, and they never look at the camera. They are immanent to themselves and objects to us. I wonder: Does a monkey enjoy copulation? Does she enjoy it more than she enjoys anything else? For Bataille, the world of animals is “closed” to the human—it is absurd to try to imagine their point of view. But we can’t help but notice what their point of view is: The dominant monkey looks from side to side as if unaware of the occupation of his lower half. For the briefest of seconds, and in a notably automatic fashion, the monkey on the receiving end cranes her head around and looks behind her.

More on looking, more on eating: Terry Thompson, owner of the 56 “exotics” from Zanesville that were killed by law-enforcement and animal-control officers this October, didn’t have any permits because Ohio didn’t require them, and Ohio didn’t require them because he wasn’t profiting from exhibiting the menagerie. At the end of all the horror there was just more horror—a monkey on the loose, an orangutan infected with Herpes B that eluded the authorities but was, they said, probably eaten by a big cat. Funny that being looked at could have saved the animals from being shot or devoured. “Aggressive animals” were around Thompson’s body when he was found, too, undoubtedly eating it; noted animal man Jack Hanna told ABC News that the same fate could have befallen the living. If the sheriff hadn’t given the kill orders, he said, “we would have had carnage” in Ohio.

It’s not monkeys that pose the biggest threat to humans, of course—it’s other humans. In 43 BCE, Marcus Tarentius Varro coined the expression “dog doesn’t eat dog” (canis caninam non est) to indicate there were things that even a dog wouldn’t do. Times change, or maybe just our point of view does, but it wasn’t until the Industrial Revolution that “it’s a dog-eat-dog world” became an aphorism, and cannibalism a legitimate mode of economic and social life. On that note, it seemed like fortune was smiling upon us when Godard’s Weekend (1967) began playing in New York last month, just as the Occupy Wall Street protests were blowing up. Weekend famously ends with beaten-down bourgeois ghoul Mireille Darc settled down with a tribe of man-eaters, devouring a barbecued piece of her husband. She gnaws absently at the bone and asks the chef to save some more for later. Darc’s glaze calls to mind the “apathy” Bataille describes as characterizing the animal’s gaze after combat; still, the eating of humans by other humans seems marked by something other than immanence. We seem to be more attuned to the experience of subordination, or at least we’re getting there. I saw a photograph on the Internet the other day of an Occupy Wall Street protestor carrying a handmade sign that could have come straight from the floor of Godard’s cutting room: ONE DAY THE POOR WILL HAVE NOTHING LEFT TO EAT BUT THE RICH.