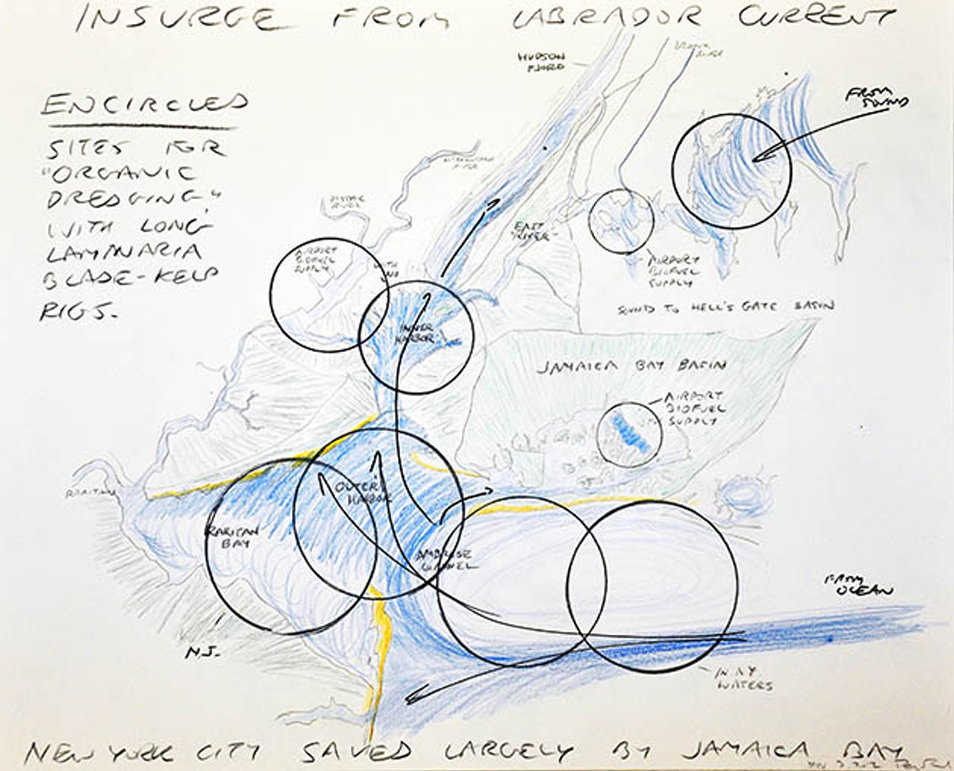 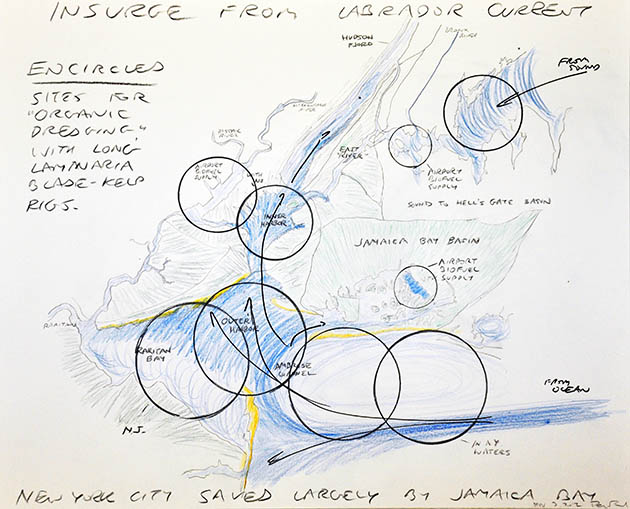 In the current issue of Triple Canopy, I published "This Can Happen Now," a proposal for turning the island of Socotra into a model for a methane-based global economy. Since then, I’ve realized that what I proposed for Socotra can also be done in Greater New York—indeed, in the whole Northeast megalopolis.

The continuous supply of nutrient-rich cold waters that flows from Antarctica to Socotra, which enables the growth of macroalgae that can be transformed into biomethane fuel, also flows from the Arctic to the Northeastern seaboard via ice melt from Greenland and the Canadian Arctic. This happens in parallel with another outflow that takes water from the Arctic, through the Bering Sea, and to the northeastern coasts of Japan and Russia. The former Arctic outflow is called the Labrador Current, the latter is called the Oyashio Current. Both are huge, and hugely fertile. In the Southern Hemisphere, there are similar colossal flows of nutrient-rich cold water running along the coast of Argentina to Peru and along the coasts of South Africa and Australasia; one of these goes to Socotra.

As a destination for polar waters, Socotra differs from the other areas in size: The island is small, and it has only only 40,000 inhabitants. The northeast of the US, by contrast, is much bigger, and has 1,000 times more people: forty million. But in all cases the cold-water environment is advantageous for the growth of brown macroalgae (usually kelp), which are favorable to fish and shellfish. In all the cold-water areas, the kelp grow very fast. This is especially true in the Antarctica-spinoff areas, where the plants are buoyed by bladders, with increase exposure to the sun. In such cases, the rates of conversion to methane are very high.

In sum, the Northeastern seaboard, like the small island of Socotra, has the resources to facilitate converstion to a biologically-sourced methane economy. For the Northeast, this is especially true where the cold Labrador Current slides past the coast of Long Island and slams against the coast of New York Harbor and New Jersey. The current brings clean, nutrient-rich sediment. The sediment is now dredged in order to keep the harbor open, but it could instead be absorbed by kelp attached to holdfasts—and this could become the basis for a wide-ranging industry based on the production of methane (or other fuels) from seaweed. After the current collides with the coasts of New York and New Jersey, it flows very slowly and deeply to Antarctica.

We can rely on the current, a natural resource, for a continuous supply of zero-climate-change fuel. The oil industry options of deep-sea drilling, Arctic extraction, mining tar sands, and fracking are all extremely risky in comparison to the methane model of Socotra. This alternative model could become standard wherever cold waters spin off from the Polar ice caps.

One scenario, which I first displayed in full at Peanut Underground in New York last year, and was recently invited to display and discuss at MIT, has been on view—with a technical inquest—at Glasshouse in Brooklyn. On June 12, I was joined at Glasshouse for a critique of this scheme—based on technical and economic feasibility—by Natalie Jeremijenko, an artist and engineer, and Zoya Kocur, an art historian and one-time Wall Street trader. The former affirmed that a multispecies mix will produce the best results, advising that shellfish, fish, and plants be situated in open-sea conditions. The latter brought a recent scientific paper that had been presented at a conference in Bremerhaven, Germany and summarized all the open-sea macro-algae schemes and their long-term potential. In sum: the science is reasonably sound, even established; but doing such a project on large scale, commensurate with ocean bioproductivity, has been tough.

The proposal to turn the Northeastern seaboard into a methane economy, like the proposal for Socotra, was conceived and produced with a team of artists and architects organized within a company named Ocean Earth Development Corporation, which I co-founded in 1980 as a business-corporation successor to collaborative project groups in New York. The critical concepts of organic dredging, spore uptake, harbor service, and industrial rowing have all been developed by different individuals who are part of this team. We have also acquired experience in mashing, silage, and fermentation of marine macro-algae. International stakeholders include Catherine Griffiths, Heidi Mardon, Kevin Gannon, Eve Vaterlaus, and myself. We seek investment in the near future—this year—in New York City, so that “this can happen now” in New York as well as Socotra. Several thousand people, many in need of work—and this is meaningful, honest work—can start transforming the local economy this summer. The expertise would be local, being specific to the ecology of the region, and it would be more of a field-ecology project and a workout than “work.” A new form of economic activity can be built. It could address, head-on, the threat of another Sandy. We call it Seaweed Defense .

History is the task, not art. We must change the fuel base—very fast, before fossil-fuel industry destroys the planet through climate change, ocean acidification, and “unconventional” extraction. (A Shell engineer I recently spoke with in Amsterdam admitted that even the industry scenarios show us “hitting a brick wall” very soon.) By staying inside the art box, we get nothing historical accomplished. So what I set forth here and in “This Can Happen Now” can be spread through our own media for our own economic future.

This future will come to be not only in New York and New Jersey, not only in the Northeastern seaboard, but throughout the ocean-current basin that flows towards NY and New Jersey, extending south from Greenland and Hudson’s Bay. A Labrador Current corporate venture will be built from an old, historic base: that of the Hudson’s Bay Company, founded in 1670. The territory originally assigned to the Company was that of the watershed of the entire Hudson’s Bay, also called Prince Rupert’s Land. The boundaries are the same as those of our ocean-basin mapping practice: all that drains into the body of seawater called Hudson’s Bay. Now we simply expand that frame to include all that flows out of Hudson’s Bay, or Greenland and the Arctic islands, into the Labrador Current. The Hudson’s Bay Company will be enlarged and, devoted to supplying the region with renewable energy, will become a viable alternative to twentieth-century petroleum companies.

With polar icecaps as the starting point for generating renewable energy from marine biomass, we can take on climate change where it threatens us most. In doing so we conduct a sort of “speculation” that differs from those currently being advanced by Triple Canopy. We subject ourselves to standards not of culture but of Wall Street and engineering. After all, Wall Street investors also engage, every day, in speculations on future scenarios, in much the same language.
Related Content