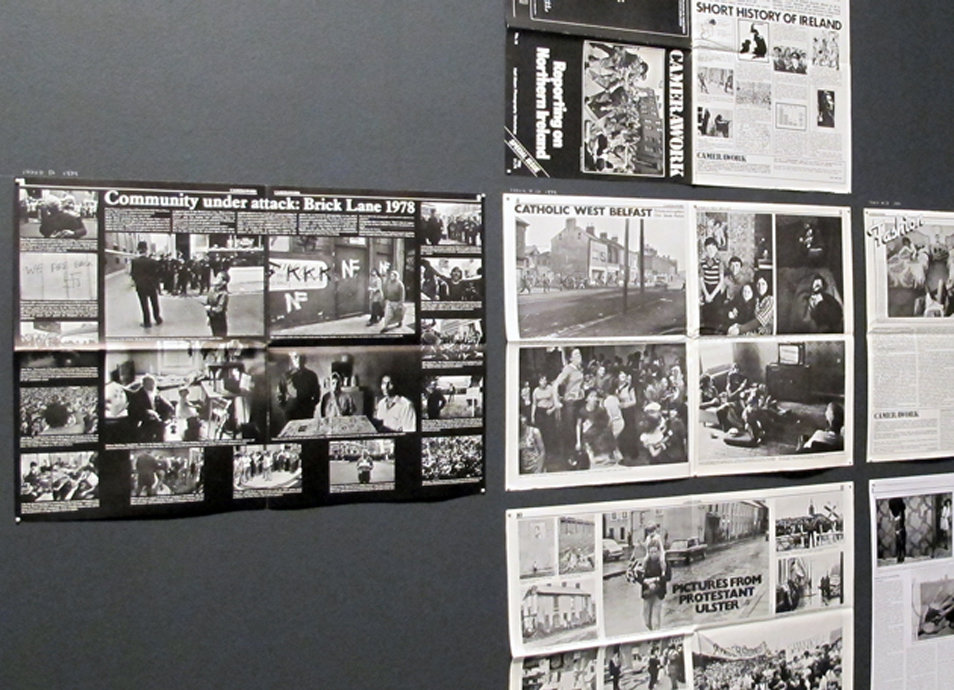 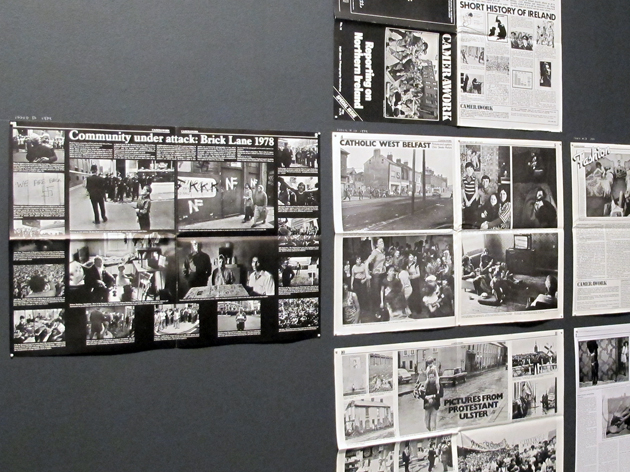 
Matthew Higgs is an artist and writer as well as the director and chief curator of the New York City nonprofit art space White Columns. In March White Columns debuted Pages from a Magazine, an occasional exhibition series examining influential yet overlooked magazines. The first installment, which was on view until mid-April, looked at Camerawork (1976–88), a photography magazine published by London’s Half Moon Photography Workshop. “By exploring the application, scope, and content of photography, we intend to demystify the process,” Paul Trevor, one of the publication’s founders, wrote in 1976. “We see this as part of the struggle to learn, to describe and to share experiences and so contribute to the process by which we grow in capacity and power to control our own lives.”

Higgs first encountered Camerawork as a teenager in Manchester in the late 1970s; the copies included in the exhibition are from his own collection. The magazine captivated Higgs by illuminating societal and cultural shifts in the UK during a particularly tumultuous period, dealing with the rise of Thatcherite politics, youth subcultures such as punk rock, and postmodernist theory, all through the prism of photography. Here Higgs discusses Camerawork and Pages from a Magazine with Triple Canopy editorial and program director Peter J. Russo.

Peter J. Russo: White Columns has a rich history of exhibiting printed matter and ephemera that aren’t traditionally defined as art objects. I’m thinking in particular of “Sleeve Notes,” the 2007 exhibition of liner notes organized by you, Dave Muller, and Bob Nickas, as well as the ongoing series bulletin-board installations in the gallery’s entrance lobby.

Matthew Higgs: I’ve always been interested in printed matter of all kinds. As a teenager, between 1979 and 1980, I published Photophobia, a photocopied music fanzine in the UK, and over the ensuing years I’ve become a collector of various kinds of printed materials—notably gallery-invitation cards, dating back to around 1990. I probably have several thousand. I didn’t—and don’t—have any particular purpose in mind for them, but they exist as a kind of archive, one that also informally charts my passage through the art world over the past two decades or so.

When I arrived at White Columns in late 2004, I was interested in how we could activate the organization’s legacy in a straightforward manner. We quickly organized “From the Archives,” a show of archival materials that focused on series of music shows organized at White Columns by Thurston Moore and others called Noise Fest and Speed Trials, in 1981 and 1983, respectively. This was the first in an ongoing series of presentations called From the Archives. We published a zine to go with the show, for which Thurston wrote a great biographical essay, and two of White Columns’ former directors wrote about their memories of organizing these concerts with Thurston. Since then we’ve published thirty-four different issues of the zine W.C., creating another kind of archive or paper trail. This approach to exhibition-making includes “Sleeve Notes,” as well as “Scenes from the New York Art World c. 1979,” our recent presentation of photographs taken at New York gallery openings in the late 1970s, which I bought at the Twenty-Fifth Street flea market, and Disco Files, the facsimile publication we did of Vince Aletti’s mid-’70s writings about disco.

Regarding the W.C., we made a decision to only use Xerox printing for our publications. There are many advantages to doing this, as it means we can design and print in a very short period of time, and we can print a handful or a run of several hundred. It all happens at the local Staples store on West Fourteenth Street. We can reprint whenever we feel like it. Inevitably, making publications this way self-consciously positions them within the histories of DIY self-publishing, of which fanzine culture and pamphleteering are two obvious precedents. As with these earlier approaches, designing, printing, and distributing our publications in such a “lo-fi” manner invokes a kind of “attitude” that we hope prevails or echoes throughout our programs and exhibitions—where things can be, hopefully, more fluid and informal. (In a similar spirit, we started a vinyl-only record label a couple of years ago called the Sound of White Columns; we’ve released four records to date by Tussle, Martin Creed, Billy Childish, and Ikue Mori and Julianna Barwick—a new one, which is a corelease with RVNG Intl.) We also produce Xerox prints with artists, to raise funds for White Columns. Each is produced in a signed edition of fifty copies and sold for $150. As photocopies, they announce their inevitable obsolescence; it’s unlikely they will outlast their owners, as they tend to fade when exposed to any kind of light.

PJR: In an article for Artforum in 2003, you wrote that you hadn’t entered a gallery or read an art publication until stumbling upon Rosetta Brooks’s ZG Magazine in a Manchester bookstore circa 1980. It’s not hard to imagine that a lot of people’s first experience with contemporary art was via the printed page—or now, increasingly, the screen. And yet there’s a general sense that the artist book or magazine is a rarefied discipline, despite its accessibility and ease of distribution.

MH: Our “solution” to this issue was to start the fanzine that we publish every six weeks or so. We sell them at cost—around two or three dollars—and plan in the coming year to make them all available as PDFs so that people can, if they want to, print off their own copies from the website at no charge. Everything we’ve published since I arrived at White Columns six years ago has been produced on photocopy machines, including Bob Nickas’s Exhibition Scrapbook, the original edition of Vince Aletti’s Disco Files, and more recently Aubrey Mayer’s five-hundred-plus-page book of Xeroxed photographs of Christopher Wool at work in his studio. I’m interested in the slightly anachronistic gesture of working with a technology like photocopying, which is increasingly redundant.

PJR: How do you credit the renewed interest in artist books and magazines? I know you’re a big supporter of Printed Matter. What about things like Kenneth Goldsmith’s UbuWeb, which has made so much material that originally appeared in print available online?

MH: Technology has clearly opened up access to materials that once were probably known only to specialists, academics, collectors, or people of a certain age, who would have experienced those things when they were happening. This process of democratization—the opening up of the archive—is mostly a good thing, as it broadens the potential for these works to not only be seen but also to be recontextualized. Probably the most significant curatorial trend of the past decade has been the recuperation of the practices of older and often overlooked artists (a tendency that has become so prevalent that Roberta Smith, writing in the New York Times, came up with the pointed phrase “no artist left behind”). A potential downside of this tendency is that a lot of the most interesting critical and curatorial work of the past decade has been historically reflective or research-driven. It will be interesting to see what happens going forward: if and how a new generation of artists and practitioners start to move away from the past and stake out their own territory.

PJR: The Camerawork show, which might have taken the form of a reading room, instead was set up as a display of spreads from various issues tacked to the wall, emphasizing the visuality of the magazine over all else. Why?

MH: The exhibition-series title, Pages from a Magazine, literally means just that: We’ll present pages from existing magazines and journals that we feel are underknown, in hopes that they will not only reach a broader audience but perhaps, down the line, stimulate more interest and further research. I always find reading-room situations in galleries unsatisfactory and almost never spend any time in them. In this case, I was interested in presenting very particular pages, articles, and images from various issues of Camerawork. I was interested, on this occasion, in people not being able to browse through whole issues or to handle the magazines in a way we’re all used to. Instead, I was trying to give a sense of the things that interested me most, from a contemporary perspective, as well as presenting the magazine graphically, as visual design. Also, I had always been interested in Ian Wallace’s early conceptual work Magazine Piece (1970–), in which the right-hand pages from any given magazine are pinned or taped to a gallery wall in a gridlike fashion. I liked this shift from something being held and read privately to something being presented and read publicly. I was also interested in the fact that some people seemed upset that I had put pushpins through the actual pages of the vintage magazines—as if it were a form of vandalism!

PJR: In addition to ZG, you’ve cited the British magazine Performance as an inspiration. Should we expect to see exhibitions of these publications?

MH: When I wrote about ZG and Real Life magazines for Artforum eight years ago, there was nothing written about either publication—I remember trying to find articles at the time, and I couldn’t locate anything. So that piece, however poorly researched, was the first time since the era in which those magazines were being published that any attention had been paid to them. Subsequently, there has been more research, including exhibitions, reprints, and coverage in more academic surveys on artist magazines and publications—especially in relation to Real Life. ZG somehow remains less well known or visible, and its early bold, large-format design would lend itself well to a similar presentation as the Camerawork show. I also have a complete run of the magazine, so it would be relatively easy to stage.

I think the next show might look at Performance—which I haven’t heard mention of in twenty-plus years. As with Camerawork or ZG, I used to buy Performance as a teenager, and it introduced me to artists like Brion Gysin and performance groups like the Neo-Naturists and a whole lot more. It blurred the distinctions between performance, theater, and experimental music, among other things, in a way that made sense even to a naive teenager like myself. My copies have been in storage at my mother’s house for nearly ten years now, so on my next trip home I will have to dig them out. 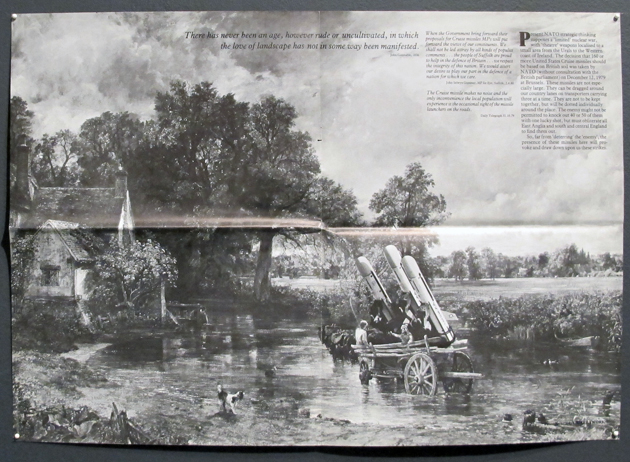