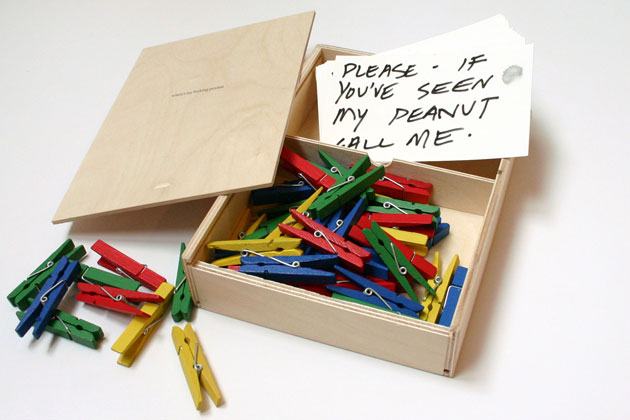 Rachel Harrison
where's my fucking peanut, 2012
Set of twenty-six 3-1/2 × 6 inch inkjet-printed cards and 32 wooden clothespins
Edition of 50, with 8 artist proofs and 2 printer proofs
Signed and numbered by the artist
Published by Triple Canopy
$400

Triple Canopy is pleased to announce the publication of where’s my fucking peanut, a new limited edition created by artist Rachel Harrison. The work is now available and will be on view at Frieze New York, May 4–7 (booth A13).

where’s my fucking peanut consists of twenty-six printed cards and thirty-two painted clothespins housed in a letter-pressed wooden case signed by Harrison. The text on the cards is scrawled in Sharpie and increasingly anxious in tone; each wonders about the whereabouts of a peanut allegedly stolen from an installation by the artist during an exhibition at the Right Bank, a Williamsburg bar, circa 1993. “Woe are peanutless days,” indeed.

Expanding upon an existing work included in Harrison's traveling survey, "Consider the Lobster," where’s my fucking peanut was conceived as the counterpart to her online project "Rump Steak with Onions," following its publication in the fourteenth issue of Triple Canopy. The article melds several stories of art and theft; among images of American entertainment legend Johnny Carson and a game of computer solitaire gone haywire, a body of evidence emerges.

At Frieze New York, May 4–7, Triple Canopy will also exhibit artworks by several other contributors to its online magazine. These include a new commission by Brooklyn-based artist Boru O’Brien O’Connell, a two-channel video based on the "metalogues" of English anthropologist and linguist Gregory Bateson; a sculptural artifact from a performance by David Horvitz; and modular seats and book displays by Gareth Long. Recent publications by Triple Canopy will also be available, including Invalid Format, an offset edition of The Binder and the Server, and the broadsheet Miscellaneous Uncatalogued Material.

Special thanks to Carol Greene and Alexandra Tuttle for their support of this project.

For more information, please write to contact@canopycanopycanopy.com or call (347) 529-5182.