Return to the Meadowlands
Christine Smallwood 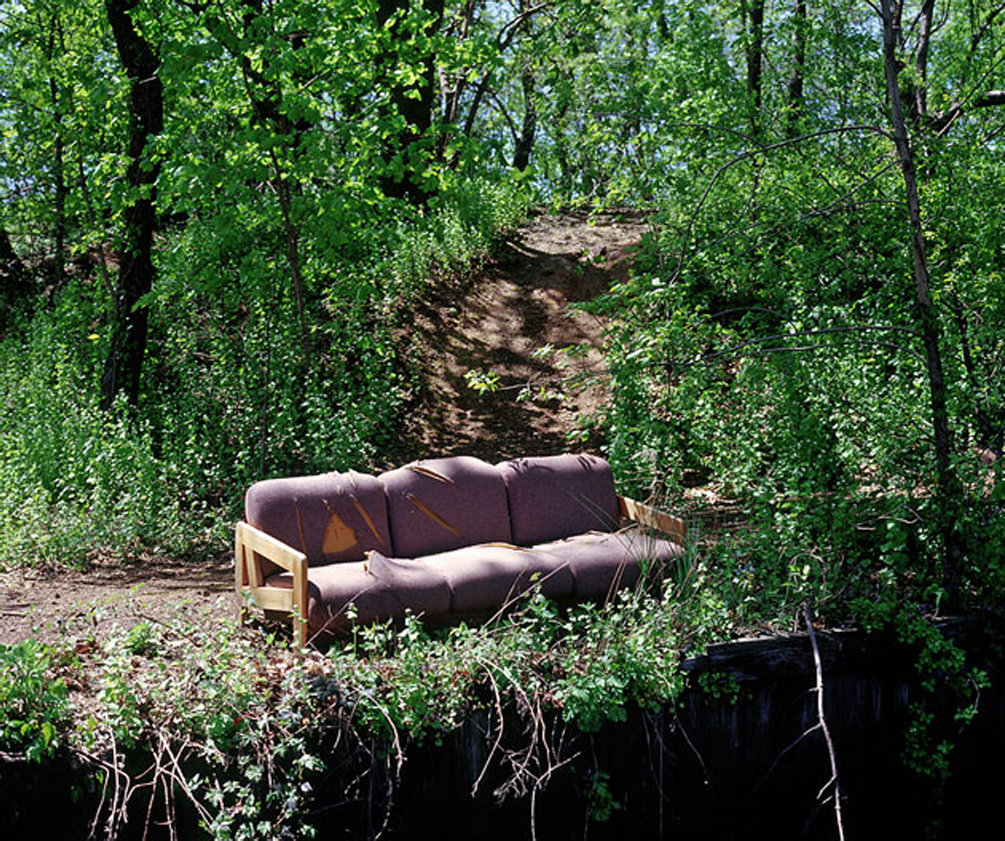 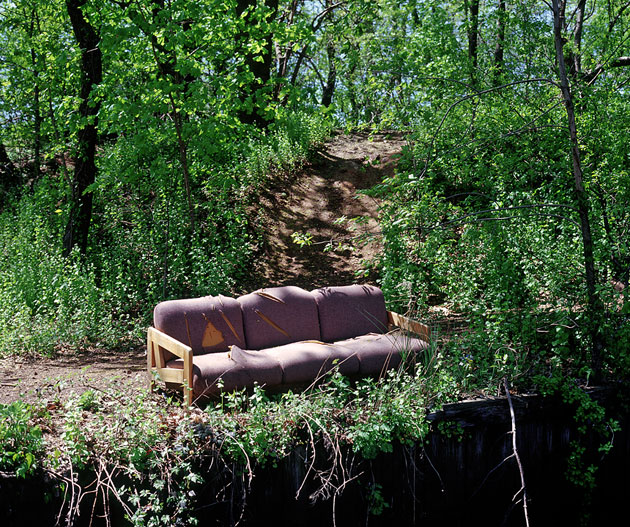 Bryan Zanisnik, photograph from "Beyond Passaic."

Bryan Zanisnik’s photo essay in Triple Canopy "Beyond Passaic" documents the author’s illegal wanderings in New Jersey’s heavily polluted and largely neglected Meadowlands. Inspired by Robert Smithson, himself famously inspired by the region, Zanisnik walks abandoned train tracks, finds discarded objects, and discovers a hobo encampment under a bridge. While Smithson was drawn to “geology and rock quarries, monumental vacancies and ruins in reverse,” Zanisnik is interested in the legal ambiguity of the space, its toxicity, and the people living on its waste. For Zanisnik, the worst fate that could befall the Meadowlands—worse than its destruction by corporate behemoths, and worse than its reclamation as a mall named the American Dream—is to be put on a map.

Abstraction is death. Zanisnik’s photographs of underpasses, oil drums, and mossy rocks evoke a feeling that no squiggly lines could capture—certainly not the map that hit the Internet a couple weeks ago, in which cartographer-hobbyist Joe Steinfeld renamed New Jersey counties with tags like “The Hill People,” “Old People and Asians,” and “Ghetto in the Woods.” I think he’s got the Meadowlands buried in the “Vast Wilderness of Rednecks and Retired Hippies” and “Friendly White Families,” but it’s hard to tell. A little bit may trickle into “Poor Minorities.”

Smithson didn’t think much about rednecks. He wrote, rather, that the Meadowlands was “a good location for a movie about life on Mars.” Reading Zanisnik, it seems that your chances of survival would be better on Mars than in the Meadowlands. Certainly you have more chance of getting a drink. Even the vagrants who live there bring beer in from the outside.

Zanisnik packs his own sandwiches for his day trips, but what he really wants to eat is the air. It was the smell of “toxins and exhaust fumes” that hooked him on the place. As a child tantalized by the “stench,” he writes, “I wanted to enter the landscape.” It’s a fantasy of “total dominion,” although Zanisnik’s not interested in colonizing—he cedes the authority to the homeless living there. His celebration of the “deep knowledge” of a place, “the kind you can only get by living there,” seems governed by an epistemological digestion—knowing as eating. Or, at least, knowing as hazard. “To comprehend” the Meadowlands, Zanisnik concludes, “one must stay close to the ground and risk exposure to the environment.” True knowing, then, is located and dangerous and illegal; it is also atmospheric. It seems to happen by osmosis. Authorities and scientists do not “know” the Meadowlands like he knows it, and he doesn’t know it like Eddie. An essential truth eludes all of them. At best, they’re day-trippers—they’re not there.

Strange, then, to find that “there” is always somewhere else. The mind is never where it is. “Man thinking,” to use Emerson’s image, is man making metaphors. The Meadowlands is like Mars and like a Roman ruin; it’s like Chernobyl and the Vietnamese jungle; it’s the dirty dream repressed by New York City’s psyche. For Zanisnik, the Meadowlands is like everything under the sun except the tracts of land that abut it, the developed properties that surround it. Like many an urban explorer, he is bemused at the proximity of his Miltonic “Universe of death” to the straight world, here represented by a Burlington Coat Factory located a few hundred yards away. And yet, in some sense, regardless of whether or not the Ukraine has its own discount outerwear chain, I can’t shake the feeling that the Meadowlands is more like a Burlington Coat Factory than anything else—they share the same ground, grow from the same roots. Besides, worlds collide—that’s what worlds do. What do we think the world is, that its creases and collisions should surprise us?

Just this week I came across a short Sartre essay that suggests an alternative to a digestive epistemology and the fantasy of mastery: A Fundamental Idea of Husserl’s Phenomenology: Intentionality. Instead of taking in, Sartre explains, consciousness flies out; it doesn’t meld like mist with the world, it confronts it. What this means is that there is not a true knowledge—of a wasteland or anything else—that a subject must through trial endeavor to swallow and assimilate. Different positions will yield different knowledges. Among other ways of knowing, Sartre lists fear, hatred, and love. These are not “mere” subjective reactions; they are properties; things disclose themselves to us as already fearsome, hateful, lovable. To the policeman is disclosed one Meadowlands and to the Amtrak scientist another, to the vagrants another, to the viewer of Zanisnik’s photographs another still. There is no losing oneself in the world. There is only the “blinding light” of being in it.

It helps that being blinded by the light is a tried-and-true New Jersey experience. It happened to Mars aficionado David Bowie when he saw Bruce play in 1972 at Max’s Kansas City, and went back to London to record a cover of "Growin’ Up." Two years later, they met in Philadelphia to record a version of ""It’s Hard to Be a Saint in the City." That’s got to be true. But it’s probably hard to be a saint anywhere, in the badlands of Jersey or as a space oddity on Mars or out in the dumps of the Meadowlands. Maybe hardest in Passaic County, when there’s no one around—nobody said that being a saint was like being a hermit. Escape is no transcendence. At the end of his reflection on Husserl, Sartre concluded that “everything is outside. Everything, including ourselves. It is outside, in the world, among others. It is not in some lonely refuge that we shall discover ourselves, but on the road, in the town, in the crowd, as a thing among things and a human being among human beings.”