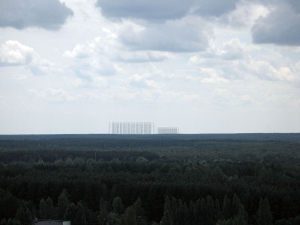 The Duga-3 site within the Chernobyl exclusion zone.
The journal Public Culture recently published (and sequestered behind a pay wall) a paper called “Sensitive but Unclassified,” which claims that national-security developments since World War II have transformed America “into a new kind of secret society.” State power now depends on the management of the “public/secret divide through the mobilization of threat,” writes the author, Joseph Masco, an associate professor of anthropology at the University of Chicago. The strategic conflation of secrecy and threat, Masco argues, has become an odd feature of American politics, turning the power of the secret on its head. Strangely, because of the sheer volume of information now available on the Internet, the state seems to benefit as much from the public knowledge that secrets are being kept—which sparks people’s imagination, often leading them to exaggerate the government’s power—as it does from any of the things it keeps secret.

The carefully managed interplay of secrecy and threat provides a rich context for understanding the spatial and architectural strategies of the modern military, and a second angle for looking at communications sites like those surveyed by Steve Rowell in “The Ultimate High Ground,” published in issue 11 of Triple Canopy. These sites, including the Menwith Hill satellite-telecommunications post in North Yorkshire, England; the Teufelsberg listening post in Berlin; and another in Bad Aibling, Bavaria, represent a small part of the incredible infrastructure the US has built to give itself omniscience—the ability to “see everywhere” and “hear everything,” as Rowell puts it—and which now extends across the earth. The function, and sometimes the existence, of these places tend to remain obscure to the people whose lives they record and analyze, which in turn gives the infrastructure greater dominion over the imagination—so long as the public has an inkling of its existence. These sites illustrate a particularly effective use of exhibitionist secrecy by the state: They mythologize the security apparatus and compound its real might with phantasmic power.

Part of this fictional power results from the strictly functional architecture of large-scale, specialized communications technology, which makes for an uncanny atmosphere. For instance, the haunting hums and eerie lights emitted by the decaying radome at Berlin’s Teufelsberg listening station are aesthetic hallmarks of science fiction and of political-conspiracy narratives: Paranormal or covert actions leave their mark on the landscape but always elude our view. That the slightest indication of a structure’s purpose, any sliver of transparency, only points to the welter of secrets they may shield further augments this power. The fact that investigative reporters took decades to discover that the Menwith Hill base is, in Rowell’s words, “a key component in the global signals-intelligence collection and analysis network known as ECHELON” doesn’t bring us much closer to comprehending that network, but it does highlight our ignorance regarding the clandestine purposes of hundreds of other installations and militarized spaces, many of which we live among. The secrecy of these sites acts as a magnet for conspiratorial energies, implying murky activities where there may in fact be none.

The US is not alone in keenly balancing knowledge and secrecy in the management of its publicly visible military architecture. Communications sites within the USSR have inspired the same sort of science fictions and conspiracy theories as their American counterparts. The enormous wall of latticed antenna towers at the fabled Duga-3 site within the Chernobyl exclusion zone, for instance, sparked a lasting mystification of Soviet power. Though the structure was really nothing more menacing than a cold-war early-warning system, it seems the USSR neglected to tell anyone. Through the years, the wall has inspired wild fictions: Some call it a weather-control device, others say it was used for mind control. The latter speculation has even been used to great effect by the creators of S.T.A.L.K.E.R.: Shadows of Chernobyl, a popular video game partially inspired by Tarkovsky’s 1979 film. The game’s designers recast the antennae as “brain scorchers,” building on the local myth that “the waves emitted by the antenna were psychoactive. The antenna was directed onto Western Europe and preoccupied with a long-lasting military experiment on psychotropic influence onto human psyche.”

Indeed, the world’s most powerful militaries sometimes seem intent on building structures that conform to this aesthetic of conspicuous concealment, exploiting the public’s conflation of the military and the sinister or unworldly. As Rowell writes of first seeing RAF Menwith Hill, a heavily guarded array of white radomes parked in the English countryside: “The contrast between the bucolic landscape and the base felt uncanny. Conspiracy theories abound among locals: a massive subterranean lair beneath the base, connecting portals in the surrounding hills and caves, mind control, alien technology.”

But the inconspicuous concealment of such communications sites, when revealed, has an even greater effect on the imagination. This is part of the reason the Washington Post’s Top Secret America series has been so popular. Of course, we are infuriated by the wasteful expense of state security and intelligence systems, which have grown so large and complex that not even the government knows their extent. But the series also reveals that the sites supporting these systems are so thoroughly hidden in the banal architecture of our cities and towns that they could be practically anyplace, discoverable only by high-order number crunching and the mapping of data flows. The revelation of this secret—which is not only unknown but also unknowable—has effected the greatest mythologization of all, projecting an image of the state’s security and surveillance apparatus as a self-sufficient entity that has virtually disappeared into the fabric of everyday life.
Related Content