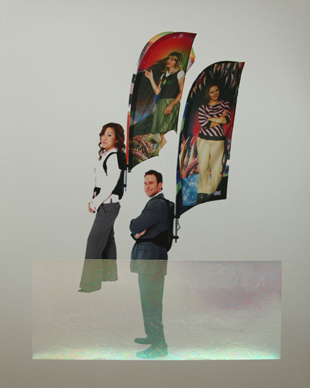 Howie Chen is a curator based in New York City who, in the past eight years, has helped shape several distinct arts programming initiatives and projects, each unique in form and scale and equally hard to categorize. Among them are the Whitney Museum’s “My Turn” series and Altria “Breakout Sessions” and exhibition series; Dispatch, an exhibition and publishing partnership with curator and gallerist Gabrielle Giattino; and Juicing the Equilibrium, a project dealing with sociological and economic concerns within cultural production, organized with artist and attorney Jason Kakoyiannis. In January 2011, Chen and designer Chetan Mangat launched Collectionof, an artist-driven website that is equal parts alternative space, bookshelf, and Wunderkammer. Here Chen discusses Collectionof with Triple Canopy editorial and program director Peter J. Russo.

Peter J. Russo: When we spoke last spring in advance of "Conversion Strategies" (a roundtable on temporary exhibition spaces conceived with The Public School New York), we discussed the complexity of operating a 501(c)3 nonprofit organization, which you intentionally avoided with Dispatch. We talked about the administrative burden; how the curator's task is oftentimes diverted; and the increasing ability of gallery-type models to present or provide anything a non-profit might. All of which is to say that I know you’re adept at taking a little bit from traditional curatorial and publishing models and adapting them to channel artistic activity in new directions. How does Collectionof figure in relation to your past and current projects?

Howie Chen: The idea for Collectionof emerged from my work with Dispatch over the past few years. Right now there are many people working on projects and in spaces with a localized context that have an international presence. The emergence of high-traffic sites like Contemporary Art Daily and VVork piqued my interest, particularly in how such locally specific efforts are projected into virtual space and how these spaces and their production are represented as images. Perhaps having a physical space with regular hours isn’t entirely necessary; digitized images and information circulate for much longer and among a greater number of people.

Because these sites are intended for quick browsing, they reveal productive and sometimes problematic elisions of styling, photo editing, curating, and recreational Facebook-profile updating. What should an image of an exhibition, gallery space, or artwork look like? What is the best angle and arrangement? By now, the formal qualities of such representations, as revealed through repetition, are becoming familiar: a wide-angle lens to make the gallery look spacious, editorial-ready compositions, dramatic saturation, high contrast, and retouching. The emergence of the “art money shot”—based on something physical and soon untethered as it circulates.

I became interested in this development while also reminded of Walter Benjamin’s writing at the turn of the last century, his inventory of losses and transformations in the face of modernity. What happened to the figure of the “true” collector, the flaneur, the head, the backpacker? Did they truly exist ever? What are the transformative possibilities within technologically mediated spaces? If there are any such possibilities, we know that this space as flat and compressed and not always full of actual things.

Collectionof is positioned against this backdrop. We wanted to provide a place for deeper browsing that brings together specific artists and venues engaged in various modes of production on a platform that makes sense to us.

PJR: Collectionof launched in the wake of several sites that, for their own reasons, blend nonprofit, commercial, and membership-driven business models to both reach and engender audiences for contemporary art: 20x200, Exhibition A, Artspeak, Art.sy, etc. And then there are art-commerce sites capitalizing on the Internet's speed, networking, and marketing capabilities, like the VIP Fair—complete with avatars and chat rooms—and the United States Artists foundation's Kickstarter-like crowd-sourced fundraising platform. What’s made them possible is the comfort with which people—as viewers and, increasingly, as amateur collectors and philanthropists—engage with artwork via the Internet.

HC: I think Collectionof is very different from the other sites you mentioned, and more specific in its project and inquiry. The multiple pathways Collectionof allows for access to artwork and contextual resources reflects this; the site works for users in different ways depending on how they want to engage its content.

On the other hand, it seems many of these entrepreneurial sites approach this space by copying and pasting existing models that have proven successful in other “markets.” If the goal of these sites is to unlock art and commerce, is the best skeleton key Gilt Groupe, Pandora, Etsy, or Google? For them, the main obstacle right now is that a Rick Owens online sample sale will always draw more excitement than resizable paintings.

PJR: Collectionof has posted collections by artists and organizations from Paul Chan’s Badlands Unlimited, Alan Licht, Circuit Lausanne, Kingsboro Press, C. Spencer Yeh, and Art Since the Summer of ‘69. How do you and Chetan Mangat go about curating that list?

HC: The choices are closer to editing. Each contributor and organization on the site—there are visual artists, musicians, art spaces, publishers, graphic designers, fashion designers, among others—represents a different possible direction that the site could take.

Each presentation engages the platform in different ways, which is how the site is designed: for instance, the bookshelf (Licht, Arcangel), archive (AVA, Art Since the Summer of ‘69, ICI), production and exhibition (New Jerseyy, Slow and Steady Wins the Race, Bas Fisher International), distribution site (Badlands Unlimited, Scott Ponik), etc. These are just a few approaches; new site-wide additions are added regularly.

PJR: What’s the difference between curating/editing in an online setting, for an anonymous audience? And are you adding to the site with some audience in mind, or just developing a larger and larger catalogue, which might eventually have something that appeals to more or less everyone?

HC: Perhaps StumbleUpon or Tumblr was designed to create a new type of accidental tourist, as their names imply. We are first making a site that we want to see in this space, and then working from there. A guiding logic is that a magazine may get more readers and more pages, but it is only as good as the content.