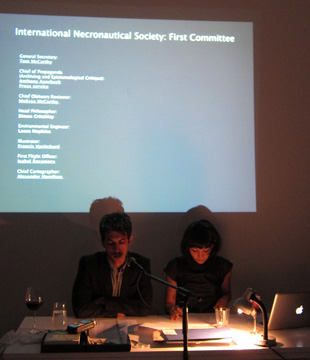 "Of Death and Lasers" at Program, Berlin, July 29, 2010
-:--  /  -:--
On July 29, as part of its Sender, Carrier, Receiver program, Triple Canopy presented a briefing on the activities of the International Necronautical Society's Berlin Inspectorate at Program. As heard in this unofficial recording, Provan, Triple Canopy's editor, and Yamamoto-Masson disputed the INS's claim that Berlin is the World Capital of Death, and discussed attempts by its members—chief among them writer Tom McCarthy, artist Anthony Auerbach, and philosopher Simon Critchley—to surreptitiously recruit agents and take over major cultural landmarks. Click here to read the draft copy of their internal report, and here to listen to a file of covert INS recordings intercepted by Triple Canopy and prepared for the occasion.
Related Content