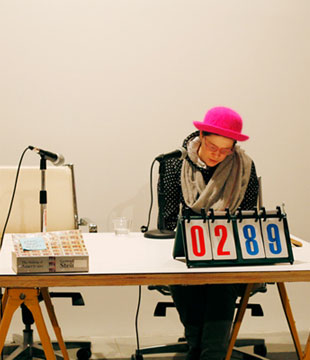 During the weekend of January 18–20, an Triple Canopy invited scores of New York–based artists, writers, publishers, scholars, and other collaborators to gather in Greenpoint to perform the entirety of Stein’s enormously long and allegedly unreadable novel. The reading lasted for 52 hours. The marathon inaugurated Triple Canopy’s fifth year. There were coffee and donuts during the dawn walk-in hours; there was borscht at dinnertime; we toasted at the beginning and end. We tweeted (#MakingUSA) the Americans as they progressed.
Related Content