An event, part of Resentment

What follows are photographs and an audio recording that document The Pearl Diver’s Revenge. Photographs by Danny Sadiel Peña. For further prose, poetry, and culinary recipes from the event, please see “What Could I Have Said with a Mouthful of Salt.” 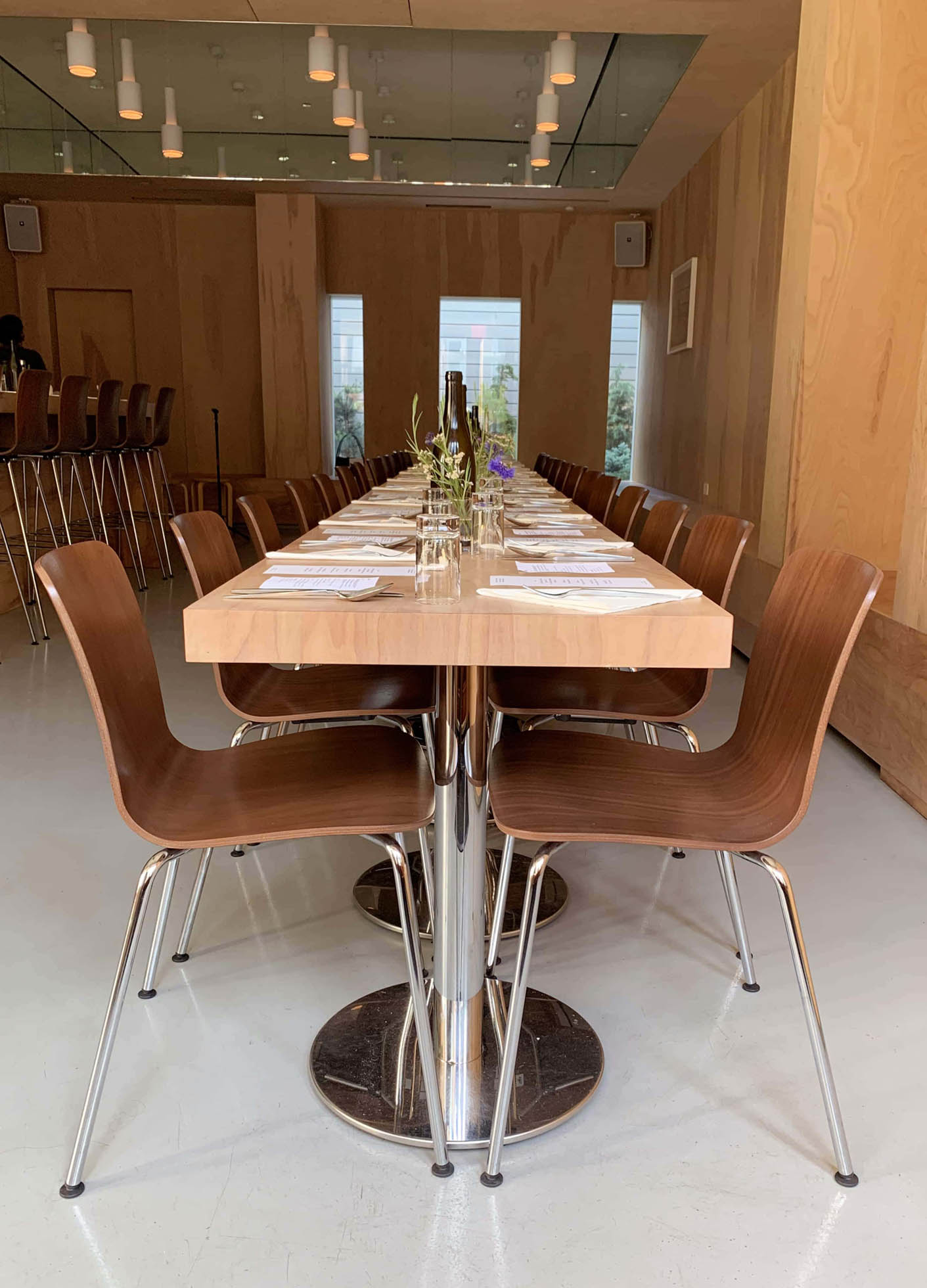 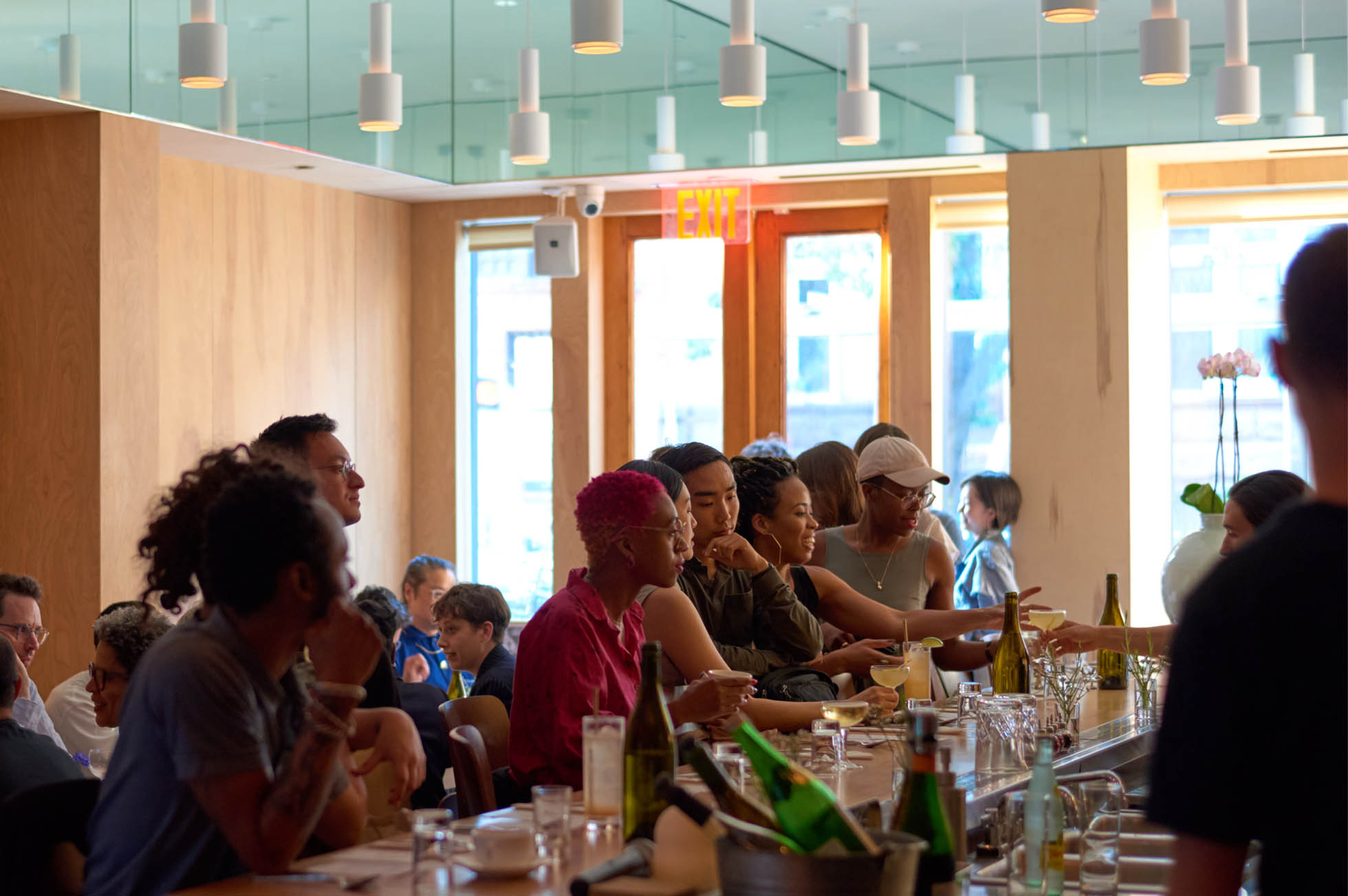 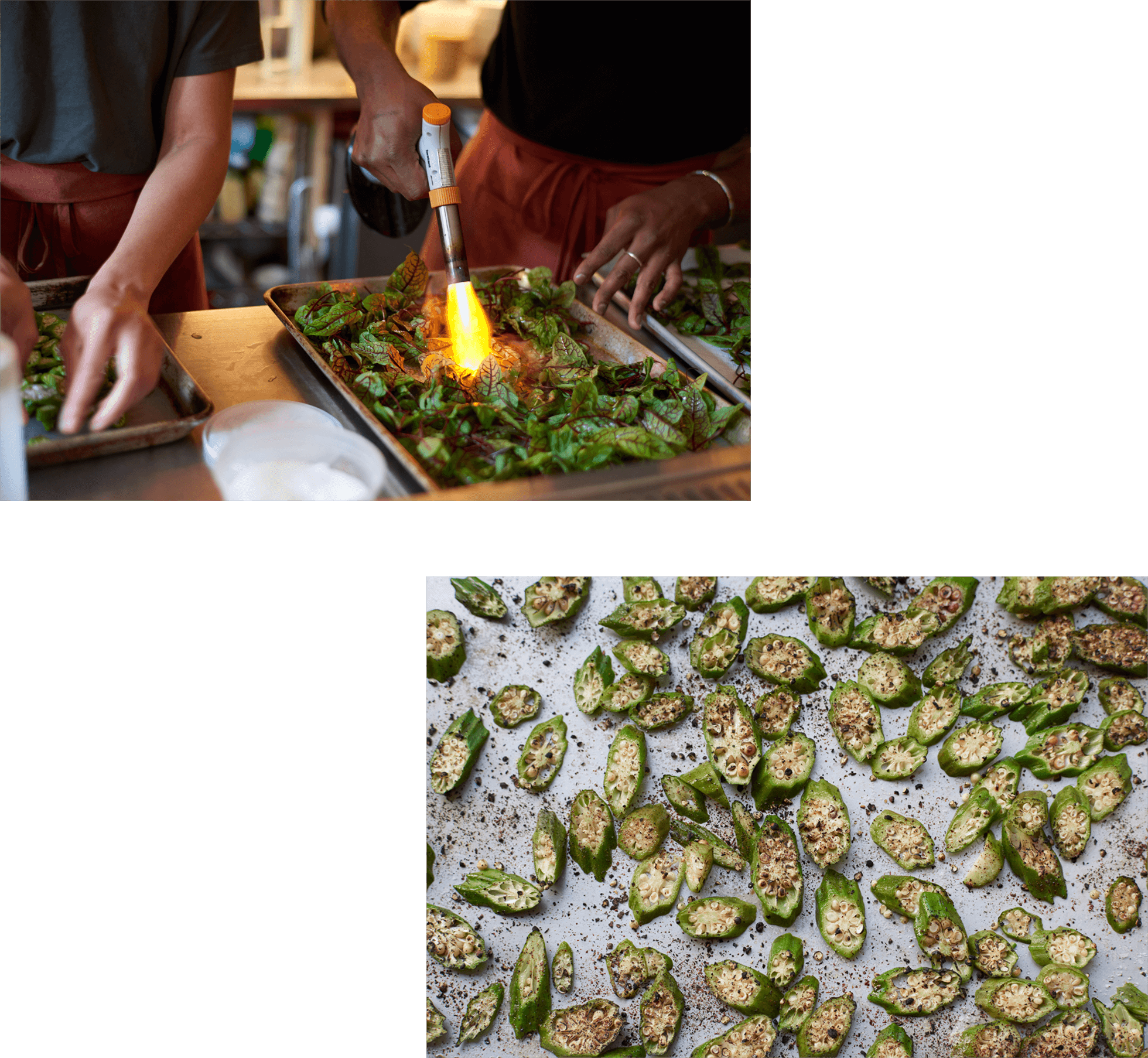 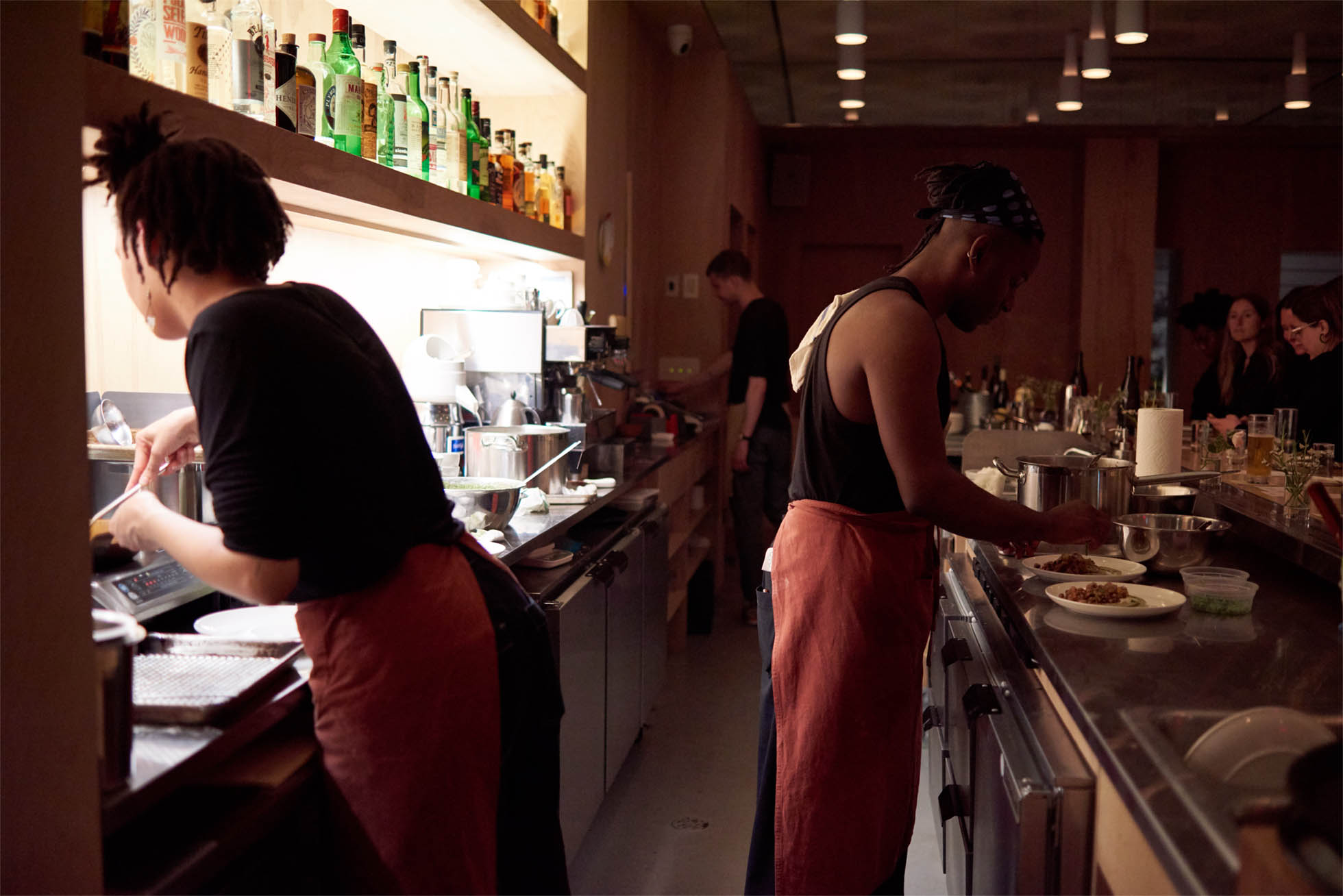 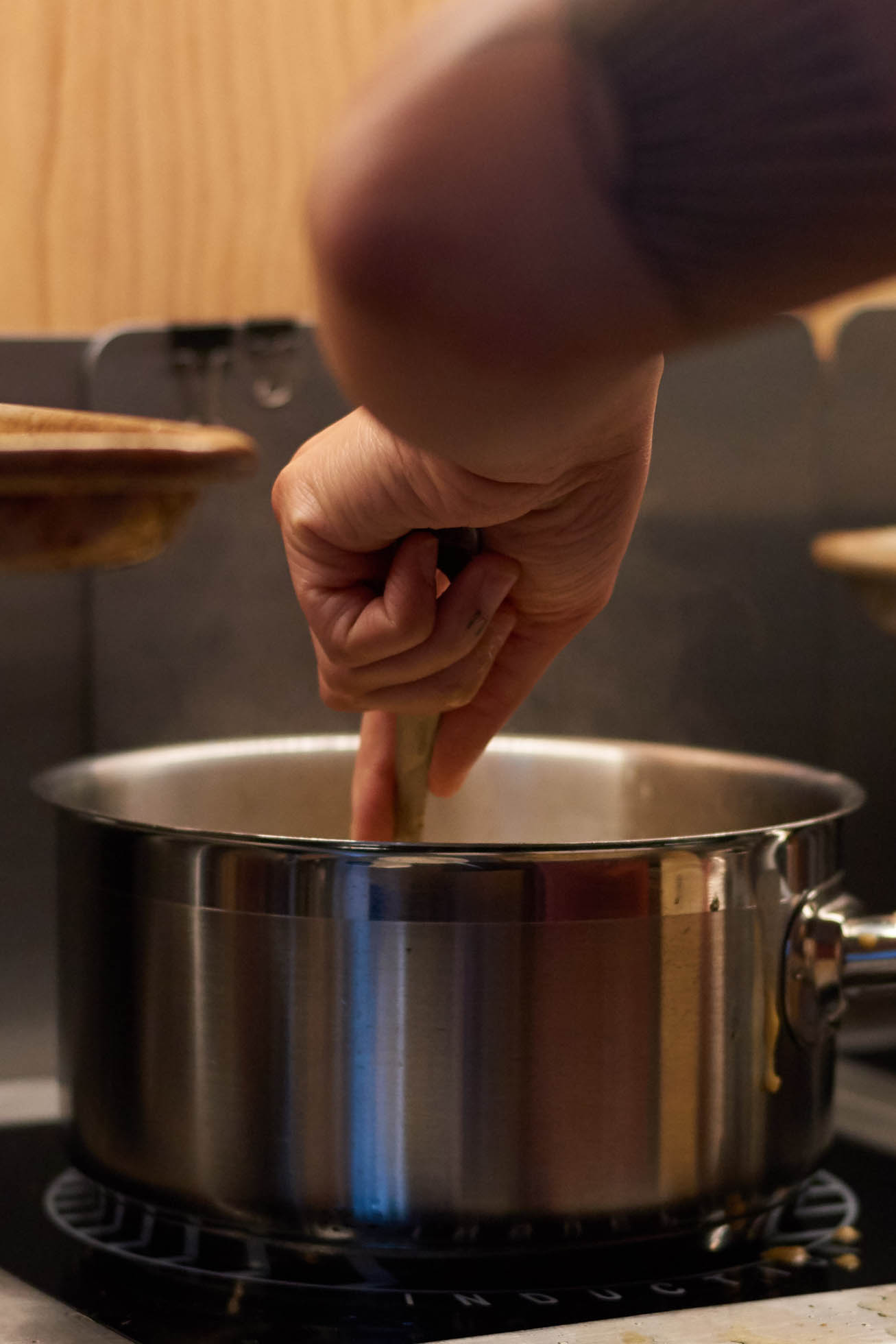 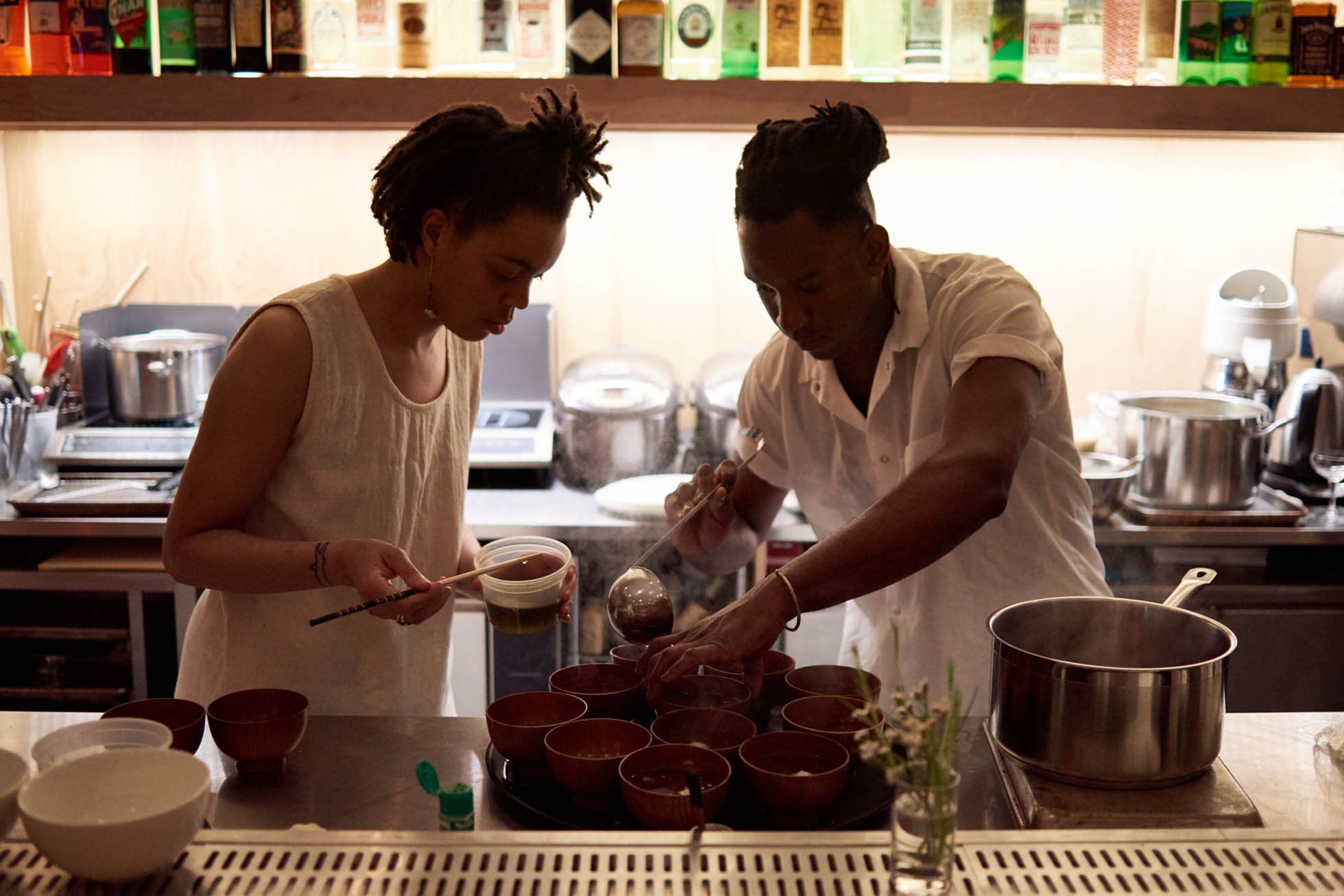 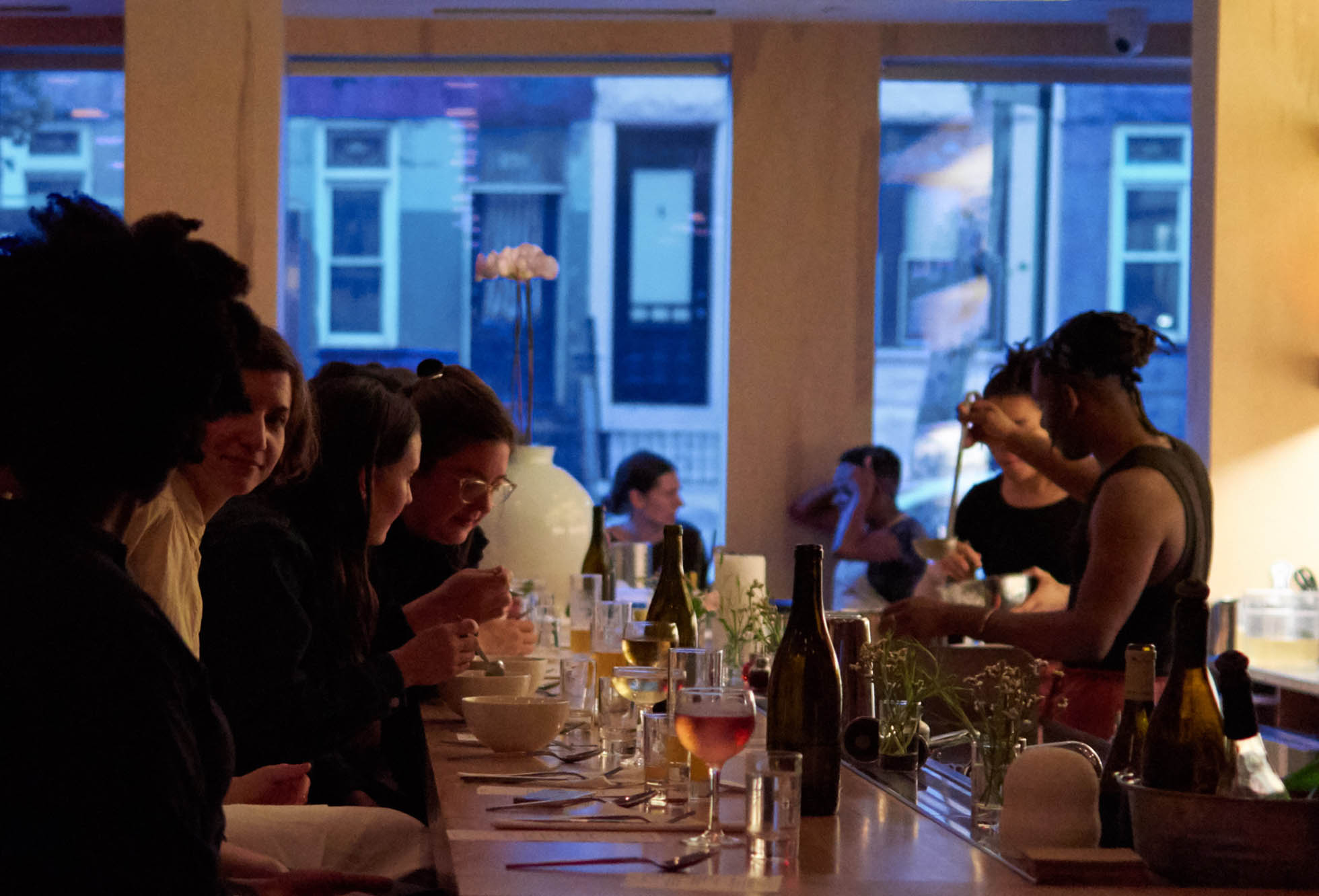 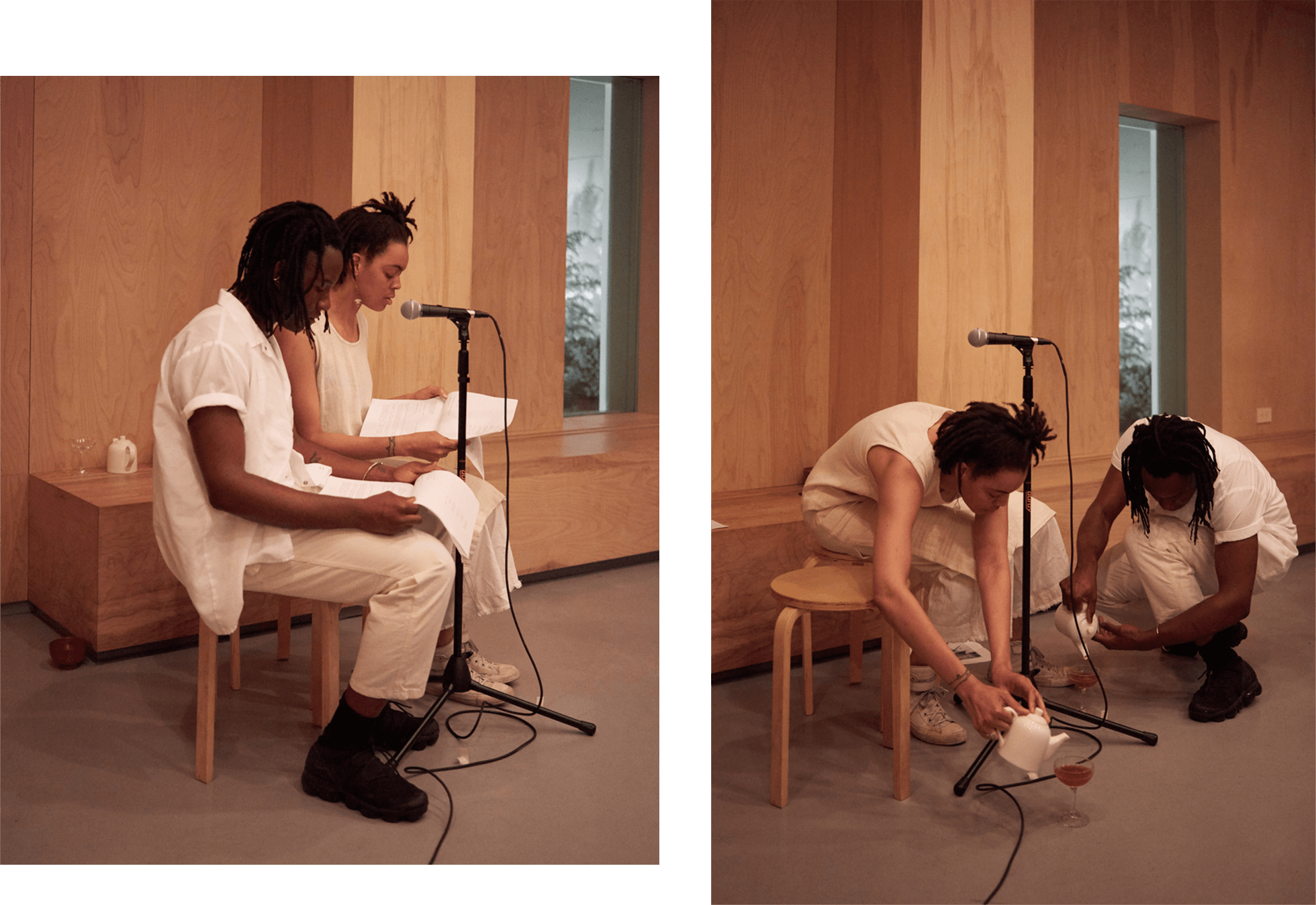 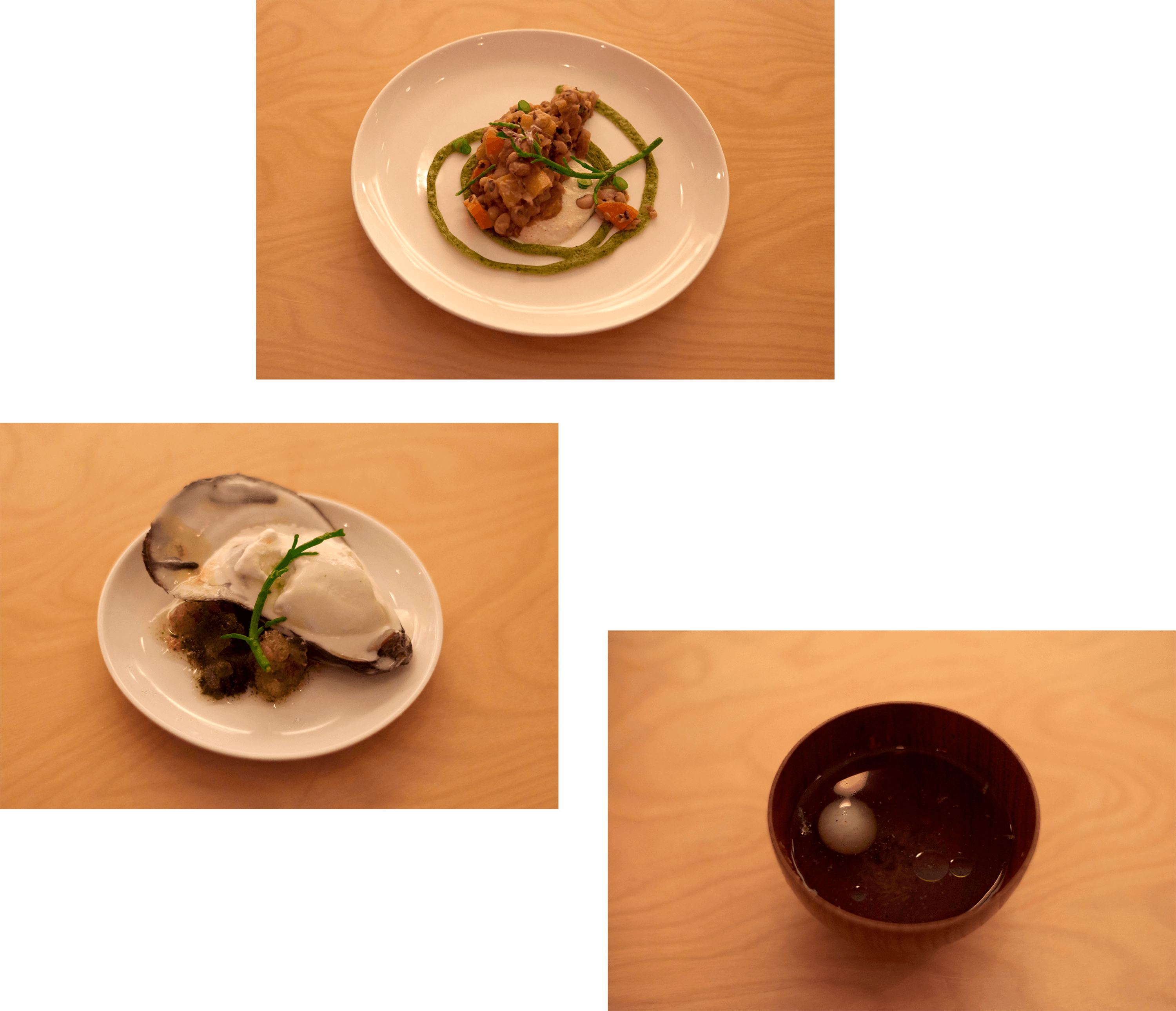 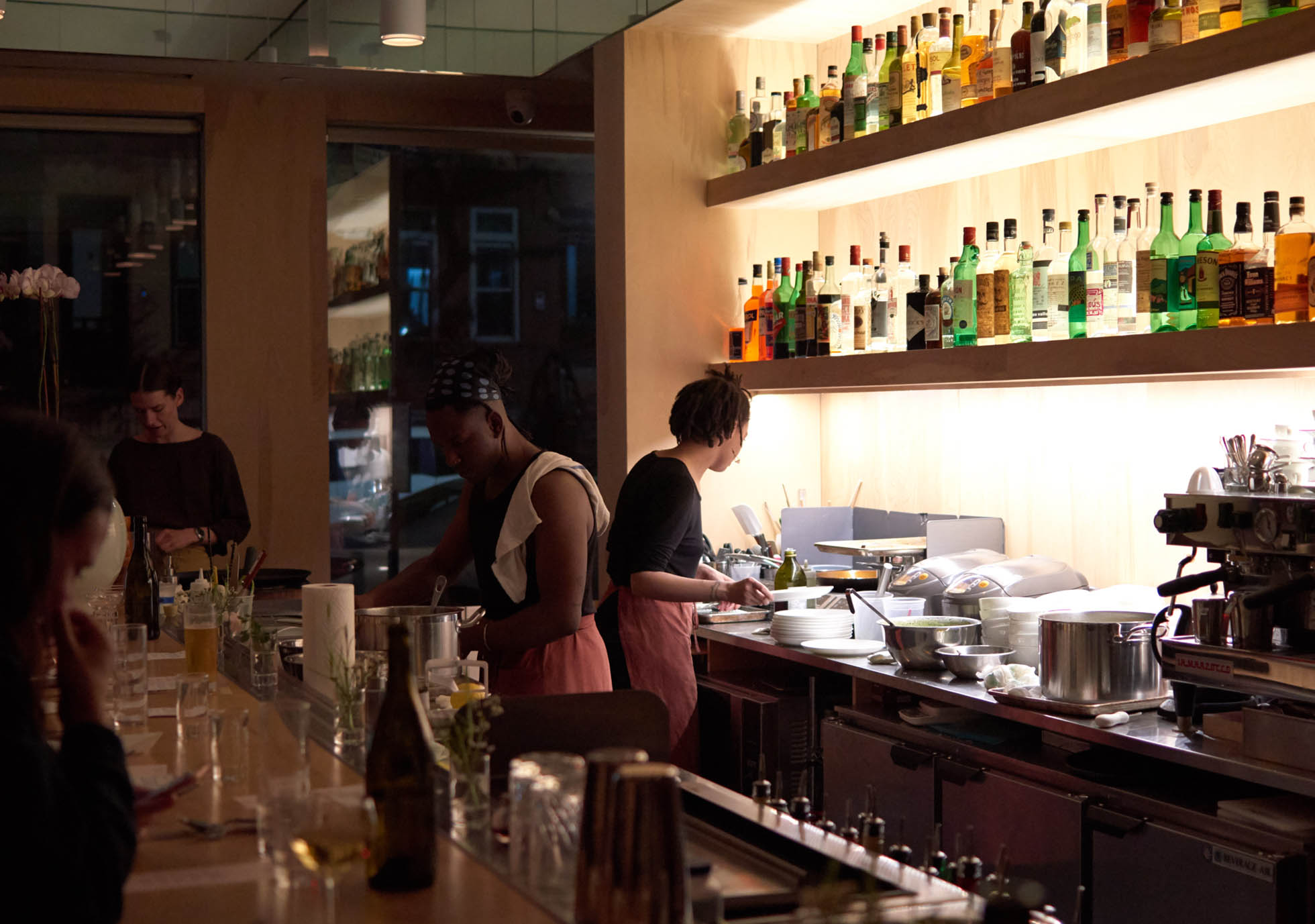 If slave labor is usually imagined as forcibly working the earth, what to make of those enslaved people who were prized for their maritime knowledge and put to work on the waters? What to make of the forgotten fishers, navigators, oyster gatherers, and pearl divers who braved exposure and shark attacks as their ears ruptured in the depths, only to be beaten if they hadn’t gathered enough—or good enough—pearls? How can that history be envisioned, and what might it bring to bear on the relationship between blackness and the water so often distorted by the white imagination, both within and beyond the attendant traumas and stereotypes from the Middle Passage to today?

The Pearl Diver’s Revenge, a dinner and performance by mouthfeel (Sean D. Henry-Smith and Imani Elizabeth Jackson), explores these questions. The meal will include speculative and historically based oyster and seafood recipes from black culinary traditions, including those of the Sandy Ground Historical Society, which is devoted to Sandy Ground, among the oldest surviving free black settlements in the United States. African American oystermen migrated from the Chesapeake Bay to Sandy Ground, in Long Island, soon after slavery was abolished in the state of New York in 1827. The meal is also inspired by the famed Manhattan restaurant Downing’s Oyster House, opened by Thomas Downing in 1825, which served as a stop on the Underground Railroad.

The four-course prix fixe dinner will be followed by a reading and performance. No substitutions are allowed, and allergies and dietary restrictions cannot be accommodated. Drinks are not included in price, but will be available for purchase.

The Pearl Diver’s Revenge is part of Resentment, an issue devoted to reclaiming—if not recuperating—resentment, especially as harbored by those who are used to fits of anger and bitterness being indicted as unproductive, petty, selfish, even pathological.

In order to ensure that events are accessible and comfortable, Bar Laika will open the doors thirty minutes prior to each event and strictly limit admittance to their legal capacity. Please check Triple Canopy’s Facebook and Twitter accounts for updates, as we’ll indicate if events are sold out.

Bar Laika’s venue is located at 224 Greene Ave, Brooklyn, near multiple accessible MTA bus lines. All entries and bathrooms are ADA-accessible. If you have specific questions about access, please write at least three days before the event and we will make every effort to accommodate you.