The Story of My Accident Is Ours: A Reading
Rachel Levitsky 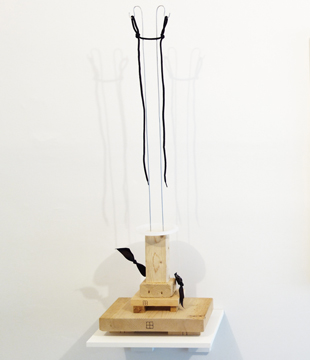 -:--  /  -:--
Hear author Rachel Levitsky read from her new novel, The Story of My Accident Is Ours, during late hours for B. Wurtz's exhibition, "History Works" at Bureau. “History Works” consisted of three new sculptures, each paired with a photograph that distorts the scale of the object or confounds perspective, echoing the artist’s seminal Photo/Object series. An iteration of Wurtz's project, also titled "History Works," was published in issue 18 of Triple Canopy.

As Rachel argues, in a recent interview with Triple Canopy deputy editor Lucy Ives, "I emphatically don’t buy into the notion that avant-garde writing is inaccessible. That notion makes me nuts. There is parochialism in both mainstream writing and avant-garde writing, by which a set of requirements becomes more important than the power of intervention. I think the role of the avant-garde is not to represent the present in past tense terms, but rather to make the present in present tense forms." Experience these present tense forms aloud!
Related Content