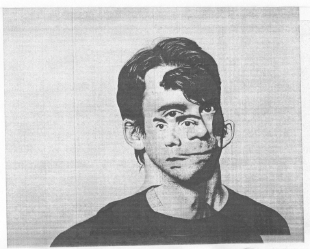 Portrait of Matthew Mehlan by Will Calcutt.

In the past decade, Skeletons has been many things: a one-man pop band, an avant-pop group, a free-jazz ensemble, an acoustic duo, and a big band, all helmed by Matthew Mehlan. (Skeletons performed at Triple Canopy's Impossible Geometries event last February.) The protean project has also been the anchor of Shinkoyo, the record label and collective founded by Mehlan and a number of collaborators in 2003. On Sunday, March 27, a Brooklyn Philharmonic string quartet and guests will perform "Where Is My New Face?," a new work by Mehlan, as well as his composition "Hands" and Louis Andriessen's "Workers Union," at the Brooklyn Museum of Art. In April, a new Skeletons record, People, will be released by Shinkoyo and Crammed Discs, as will the debut record by stellar Brooklyn teenage rap group Nine 11 Thesaurus (who performed at Triple Canopy's More Talks About Buildings in 2009), produced by Mehlan and Gang Gang Dance's Tim Dewit.

Mehlan writes here about his work as a composer and with various iterations of Skeletons. Click here to listen to "Hands"; here for "Grandma," from People; and here for "Pencilneck," from the forthcoming record by Skeletons Big Band, The Bus.

“Hands” was written for a three-night event Doron Sadja (a longtime collaborator and cofounder of Shinkoyo) and I put together at Roulette last October called the Easy Not Easy Festival. We asked for “simple compositions” from a wide range of music makers and composers and assembled three very different groups of musicians to play those pieces. The idea stemmed from an interview with David Behrman and Christian Wolff on Roulette TV. David's always talking about "deceptively simple scores," in which a very simple set of instructions on a page leads to quite complex music. Christian talks about leaving things out of the score and allowing for a situation in which the “music happens when it's played,” with the performers making some decisions rather than being reduced to “reproduction machines.”

Those ideas are really exciting to me and are a big part of what we've been doing with Skeletons Big Band, the large ensemble we formed as an extension of Skeletons. “Hands” marked the first time since music school that I put a piece of paper in front of some players whom I hadn't worked with on some improvisational or collaborative level—which is something I've avoided, as the experience of making every musical decision yourself, without the kind of rehearsal and back and forth you get working with a group of likeminded people, can be frustrating. I've always tried my best to let the music happen in the most organic way possible; the capital-c Composer doesn't often fit into that equation.

We realized with Skeletons Big Band that the music wasn't going to work without some scores and guidelines: Twelve musicians in a room don’t magically make the music you have in mind as a composer. But all the players in that situation are chosen for a particular reason, and for their ability to truly interact with the music; I found that we could achieve something pretty special with just the right amount of notation and instructions and minimal rehearsal—sometimes the most exciting things happen completely unexpectedly.

This concert with the Brooklyn Philharmonic on Sunday is a completely different beast: I won't meet the performers until we start rehearsals, of which there are only three. There's an intensity to making sure no time is wasted. These players will obviously know how to read the music and play it incredibly well, but they might not be so interested in having a conceptual conversation or mind-vomit-jam about some chicken-scratch “score” I made. The concert comes out of my participation in the Brooklyn Philharmonic’s composer mentorship program, which paired me with composer Randy Woolf. He’s been incredibly helpful, reminding me of the proper terms that classically trained musicians will understand, making sure I’m accounting for every little detail—an overwhelming amount of details compared with how I usually work. With Skeletons and Skeletons Big Band I might say, “OK, we'll do this part for a while and, like, let's get it really loud and crazy and then maybe let's bring it back down and let it simmer for a while; then look at me for the cue to change.” But here we're talking about details down to the bowing direction and an accent on a sixteenth note that happens once.

At first I was pretty annoyed by being thrust into that mode of thinking, which I've avoided in the past because it seems like such a waste of energy, and a bit outdated and self-rightous too. (I’ve written more about this on the Skeletons website.) Isn't it more fun to interact with people on a creative and collaborative level? Isn't a violinist going to have a better idea of how to play this violin part than I am? But in the end there are so many possibilities that can't be achieved in one or the other mode of composing and performing, and it's been exciting and informative to go back and forth.

Working on this new piece opened up a huge range of ideas for me—a third stream, if you will (though maybe it should be fourth stream, in this context). I love pieces that are super-singular and/or -intense, like those by Penderecki, Ligeti, Reich, and Niblock, but I don't have the patience in writing my own music to just let something be in that way. At the same time, I hate the kind of rigidness required in that kind of music: You'll never get the same kind of energy you hear in more improvisational settings. I've been really heavy into Julius Eastman's music lately, which makes sense, I think, as it takes some cues from minimalism and pop music, but in a way that’s very intense and sometimes messy. I also think the band Zs is making some of the most important new music right now, a kind of evolution of post-minimalism and post–No Wave.

With Skeletons there's always a little voice that's obsessed with pop music (“Don't take it too far!”), though a lot of pop-chamber-orchestral hybrids annoy me (“Really? You needed another flute trill in there?”). At the same time, I love complex rhythms and bombast and weird musical hybrids. There are still elements of chamber music or jazz or "Wanna Be Startin' Somethin'" in each piece of music I write. With the new Skeletons record, People, I initially wanted to make something like McCartney II or the first Paul Simon solo record: Trim all the fat and focus on the songs, don't worry so much about perfect takes or string arrangements or tons of overdubs. It's been interesting to let the pop elements of Skeletons be what they will and explore the darker, heavier elements with Skeletons Big Band—taking some of the free, energy-based playing and trying to orchestrate it into big blocks of sound. I've never been a big fan of solos, but when you have four saxophones soloing at the same time it gets really exciting! You start to deal with texture and energy rather than phrases or melodies. Melody is fine, of course, but I can't think of anything more boring that hearing a saxophone playing over the changes or a singer singing a variation on pop song x for the zillionth time. All Skeletons-related music is, for me, very focused on words, so it's good to break from that. It's also nice to not have to worry about whether I can play it or not.