The Artist and the Economic Crisis
Per-Oskar Leu 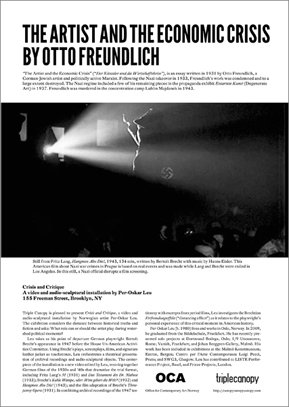 Annotated by The Editors

Published in conjunction with the exhibition Crisis and Critique, a video and audio-sculptural installation by Norwegian artist Per-Oskar Leu at 155 Freeman in February 2012. The exhibition considered the distance between historical truths and fiction, asking: What role can or should the artist play during watershed political moments?

This broadsheet, which was available in print throughout the exhibition, includes Freundlich’s 1931 essay, as well as portions of the transcript of playwright Bertolt Brecht’s appearance in 1947 before the House Un-American Activities Committee and photographs and film stills of various stagings of Brecht’s plays.