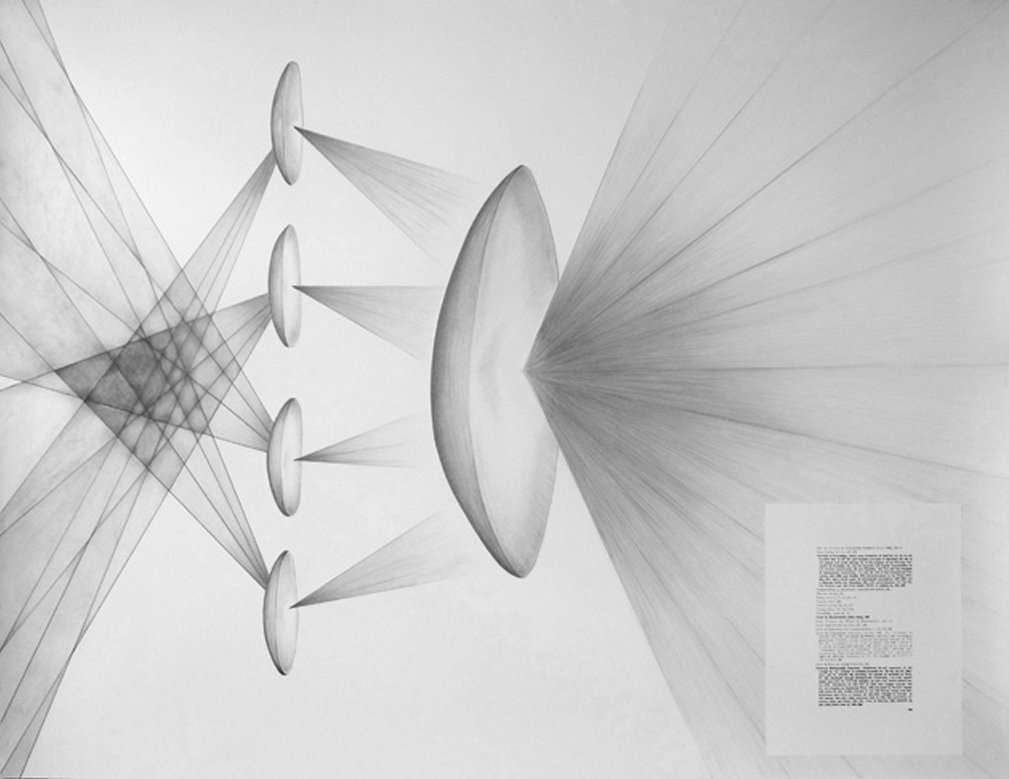 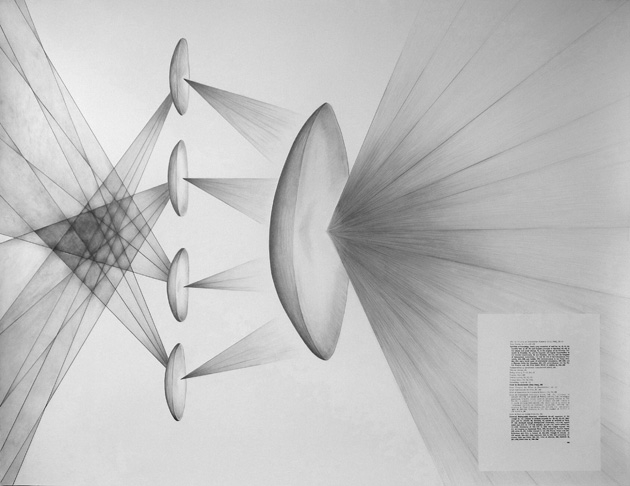 Molly Springfield is a visual artist whose drawings are often based on texts that reveal transformative moments in the history of how people experience and organize information. Here she writes about her new exhibition, “The Proto-History of the Internet,” which has its genesis in “Inside the Mundaneum,” an article she wrote for Triple Canopy’s eighth issue. The show runs from June 8 to August 18 at Thomas Robertello Gallery in Chicago.

In 2010, I wrote an article for Triple Canopy reflecting on the visionary work of Belgian information scientist Paul Otlet (1868–1944), who dedicated his life to cataloguing all of the world’s information in a single archive he called the Mundaneum. At its height, the Mundaneum contained sixteen million index cards cataloguing as many documents and offered a search service to the public. Queries could be mailed or telegraphed, but Otlet dreamed that one day the Mundaneum’s holdings—which he conceived of as a “web” of knowledge, connected by “links”—could be remotely accessed and searched by individual users through some kind of telephone- or radio-based technology (“electric telescopes”). Otlet died, his dreams unrealized.

Today the Mundaneum is a museum in Mons, Belgium. Google, as part of its general efforts to improve relations with Europe, where regulators are wary of the company’s privacy policies, recently announced a partnership with the Mundaneum. Google will sponsor the museum’s exhibition and lecture series; in turn, the museum will use Google+ to promote its programming. As yet, this marriage doesn’t include plans to digitize the Mundaneum’s collections, but the best way to ensure its posterity may be to leave it alone. Triple Canopy’s editors were recently advised by an archivist, who told them that, in addition to carefully and separately storing all of the magazine’s digital assets, it isn’t a bad idea to back up the magazine’s issues by printing out hard copies. Printing something that never had and was never intended to have a physical form may sound absurd, but given the rapid evolution of digital platforms—plug-ins need updates or become defunct, links rot—it’s reasonable to keep an ink-and-paper copy tucked away somewhere.

Brewster Kahle, a digital librarian and founder of the Internet Archive, agrees. Kahle has been in the news for his Physical Archive of the Internet, which collects deaccessioned books and films from libraries and stores them in shipping containers in Richmond, California. Kahle likens it to a seed bank: a place where material documents will be safely stored in the event that their digital versions are lost or destroyed. Preserving the original format of a document, he argues, preserves the ability to authenticate digital copies down the road. But when the risk of losing everything is just one screen of death away, maybe what we’re really trying to preserve is the illusion of permanence.

There’s a bulging file folder in my studio marked “OTLET RESEARCH.” Everything inside it can be found online or on my hard drive, but I keep the paper anyway. Among the articles, images, and whole book chapters—all printed out from the Internet—are copies of every draft I wrote for my Triple Canopy article, “Inside the Mundaneum.” Recently, I made a large drawing of a page from one of those drafts, complete with Triple Canopy’s edits, inserted with Microsoft Word’s track-changes tool (pictured below). It serves as a kind of introductory wall text for a new series of drawings I’m exhibiting this summer. The drawings appropriate, alter, and supplement the oddly charming constructivist illustrations in Otlet’s Traité de documentation, the first modern treatise on information science, and combine them with text from the index of W. Boyd Rayward’s The Universe of Information, a biography of Otlet originally published in 1975.

For my modest exhibition of seven graphite-on-paper drawings, I’ve come up with a preposterously grandiose title: “The Proto-History of the Internet.” My hope is that viewers will confront Otlet’s failed utopian vision—which far outpaced the technology of his time—as a reflection of our own futile attempts to conquer and impose permanence on the constantly shifting boundaries of what is known. 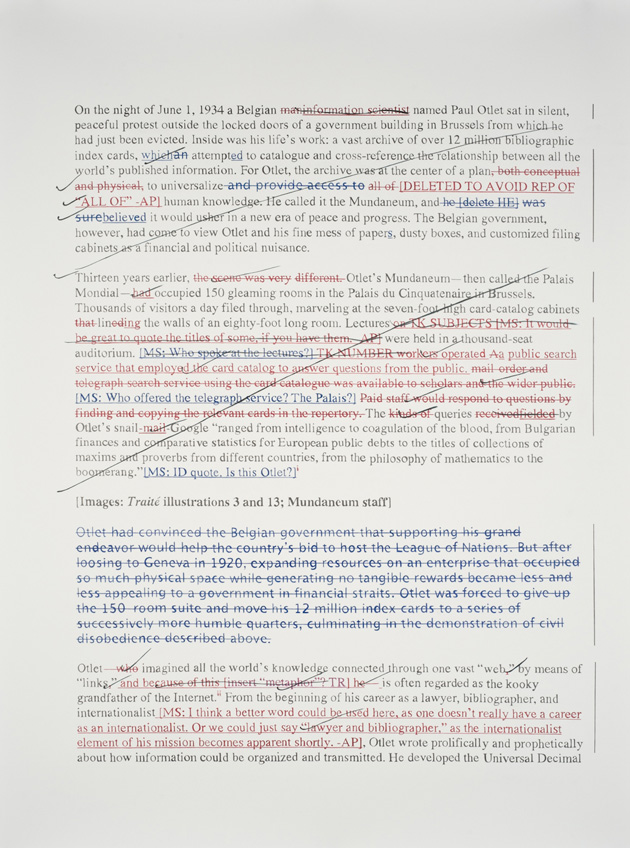