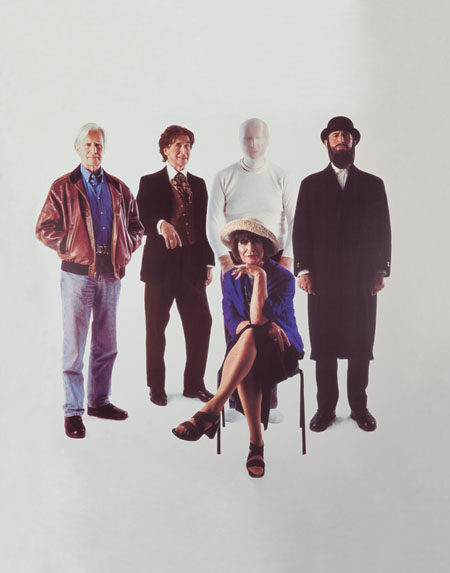 Triple Canopy is pleased to announce that we will honor Brian O’Doherty at our fall benefit on October 30th at Grand Harmony. O’Doherty will be introduced by MoMA PS1, Clocktower Gallery, and ArtOnAir founder Alanna Heiss, and artist and gallerist Margaret Lee will make brief remarks; a performance by artist and composer C. Spencer Yeh will follow. Artist Virginia Overton has created a limited-edition artwork for the occasion. The biography below offers a glimpse into O’Doherty’s extraordinary life and accomplishments.

“Visual art does not progress by having a good memory. And New York is the locus of some radical
forgetting.” —Brian O'Doherty, 1986

Brian O’Doherty has spent the past forty years challenging our understanding of the artist’s role in society and the ways in which media can extend the life and broaden the impact of progressive ideas. Through his artwork, criticism, and fiction, O’Doherty has created pathways for artists to venture beyond the studio and gallery into unconventional venues—especially forms of print and digital publication—that we now recognize as vital.

Widely known as his artist alter ego Patrick Ireland, O’Doherty has had a remarkable and multifaceted career. After practicing as a medical doctor in Dublin and researching visual perception at Cambridge in the 1950s, O’Doherty relocated to Boston, where he successfully auditioned to be the host of the Museum of Fine Art’s weekly television show, “Invitation to Art,” on WGBH. There he met art historian Barbara Novak, his future wife, who was leaving the show to teach at Barnard College. Soon WNBC offered O’Doherty the job of hosting the Emmy-nominated “Dialogue,” where he interviewed an array of luminaries including Stan VanDerBeek, Muhammad Ali, Marcel Duchamp, Alfred Barr, and Woody Allen. In 1961, art historian and New York Times critic John Canaday offered O’Doherty a position on the newspaper's editorial staff; he accepted and moved to New York. Writing of Man Ray in 1963, O’Doherty seems to anticipate his own artwork: “His whole life, dedicated to individual freedom, has been a sort of performance, illustrated by his productions [...] his slightest work emphasizes the life rather than the work itself, the ideas rather than their expression.”

In New York, O’Doherty was introduced by Rolling Stone founding editor David Dalton to Women's Wear Daily editor Phyllis Johnson, who was planning the multimedia magazine-in-a-box Aspen, published between 1967 and 1971. O’Doherty guest-edited and designed Aspen 5+6, which he described as “the conceptual issue.” The issue took the form of a pristine white case and included the first publication of Roland Barthes’s seminal essay “The Death of the Author”; Susan Sontag’s essay “The Aesthetics of Silence”; as well as vinyl recordings, film reels, foldable sculptures, and printed matter by Sol LeWitt, Samuel Beckett, John Cage, William Burroughs, Merce Cunningham, Mel Bochner, Dan Graham, and Marcel Duchamp. O’Doherty considered Aspen 5+6 to be the first conceptual art exhibition to take place outside the gallery. “The idea,” he said, “was to establish a network of provisional relationships that could be read in endless combinations, depending on the reader, listener, looker.” The prescience and daring of O’Doherty’s issue of Aspen—which has for some years been archived online at UbuWeb, each contribution available in facsimile form or as a photographic reproduction—continue to resonate, seemingly ever more so each year; the issue has become a touchstone for many contemporary artists and publishers, Triple Canopy not least among them.

After leaving his post as critic for the New York Times, O’Doherty served as editor of Art in America from 1971 to 1974 and as part-time director of visual and media arts for the National Endowment for the Arts, where he established the agency’s first grant initiatives for artist-run spaces. His programs were crucial in shaping the SoHo neighborhood as a magnet for emerging artists during the seventies. O’Doherty coined the phrase “alternative space” to describe these industrial lofts-turned-venues; he viewed the phenomenon, and the challenge it posed to established institutions and the hierarchies they represent, as a logical extension of the social criticism and reform efforts of sixties counterculture. Through his work at the NEA, O’Doherty became a noted advocate for so-called process art, activities that shift between media and disciplines. In particular, he championed video as an artistic medium; at the time, transmission was dominated by three TV networks, and artists such as Dara Birnbaum, Dan Graham, and Joan Jonas were becoming the first to experiment with the form.

O’Doherty’s support of such artistic experimentation paralleled his skepticism regarding the commercial gallery system, which he worked to both animate and interpret, as an artist and writer. In 1976, O’Doherty published Inside the White Cube: The Ideology of the Gallery Space, a perspicacious and provocative series of essays in Artforum scrutinizing the characteristic architecture and social form of the gallery and its outsized influence on contemporary art. Inside the White Cube, now available as a book, has been remarkably influential and continues to be widely read and discussed. As curator and writer Simon Sheikh summarized in a 2009 essay, “O’Doherty’s texts attest to the epistemological shift from the modern to the postmodern era of art and politics. In spite of these changes, however, the text not only marks a beginning, an end, or a part of a history, but is equally relevant today as part of a continuous debate—an ongoing struggle, if you will.” In 2012 O’Doherty received the Clark Prize for Excellence in Arts Writing.

By the time Inside the White Cube was published, O’Doherty had already mounted solo exhibitions of his own work at the Byron Gallery (1967); Betty Parsons Gallery (1970); Corcoran Gallery of Art (1974); Los Angeles County Museum of Art (1975); and 112 Greene Street (1973, 1975), which would become White Columns. His sculptures, drawings, and installations investigated language and perception—what one critic described as “art’s underlying grammar.” In 1966, O’Doherty famously invited Duchamp to dinner with the intention of creating a portrait of the artist by recording his heart activity using an electrocardiographic machine. The sixteen-part work, Portrait of Marcel Duchamp (1966), includes radiograms, drawings, and homemade oscilloscopes, by means of which O’Doherty intended to address the exhibition of art in an institutional setting. “Duchamp had said that art diminishes by half-lives in the museum,” he wrote. “Did Duchamp’s captured heartbeat refute his idea that art died on the institutional wall?” This line of inquiry was palpable in O’Doherty’s first exhibition at 112 Greene Street, in which he strung ropes from the walls, floor, and ceiling so as to articulate the space. O’Doherty recognized that he could “turn [the gallery] into a place with hierarchies of occupation, vistas, framed and unframed.” His series of “rope drawings” continues to this day, most recently in Bayreuth, Germany.

To date, O’Doherty’s work has been the subject of more than forty solo exhibitions. In 1976, Alanna Heiss included O’Doherty in the seminal “Rooms” exhibition, which inaugurated PS1 Contemporary Art Center, initiating a long relationship: PS1 hosted a retrospective of O’Doherty’s work in 1993 and, seven years later, O’Doherty served as a member of the curatorial team for the first edition of “Greater New York.” His work has also been included in Documenta VI (1977) and the Venice Biennale (1980). In 2007, NYU’s Grey Art Gallery mounted a retrospective entitled “Beyond the White Cube.” P! and Simone Subal Gallery will open a joint solo exhibition of O’Doherty’s work in March 2014.

O’Doherty has written numerous works of fiction, including the novels The Strange Case of Mademoiselle P (1992) and The Deposition of Father McGreevy (2000), which earned him a nomination for the Booker Prize. O’Doherty’s latest novel, The Cross-Dresser's Secret, chronicles the life of the Chevalier d’Éon de Beaumont (1728–1810), who lived half his life as a woman. The book will be published this fall by Sternberg Press.

O’Doherty’s most notable gesture is perhaps his adoption of the name Patrick Ireland after the Bloody Sunday massacre in Derry in 1972. He vowed to make and exhibit art under that name until “the British military presence was removed from Northern Ireland and all citizens were granted their civil rights.” For one performance, at the Project Arts Centre in Dublin, O’Doherty had his body painted in the colors of his divided nation, green and gold, then overpainted so as to resemble a victim of an atrocity. Lee Krasner once said to O’Doherty, “You’ll never get your name back.” However, in 2008, Patrick Ireland was ceremoniously laid to rest with a funeral at the Irish Museum of Modern Art, two years after the Good Friday Agreement established peace in the region. Speaking in an interview that same year, O’Doherty said that Patrick Ireland “became a reminder. Every work I did after that gained a political context for me and for anyone who may have wondered who Patrick Ireland was.” Over the years, O’Doherty has also written under the alter egos of Sigmund Bode, feminist and poet Mary Josephson, and William Maginn, whose identity was revealed in 1998.

O’Doherty “never really quite stops being a doctor,” writes critic Astrid Mania in a review of a 2012 exhibition at Gallerie Thomas Fischer.

He keeps listening to and tapping at these various artistic movements, checking them for vitality and arriving
at intelligent findings and scientific conclusions. And then, whenever necessary, he trots out some healing
apparatus of his own design and manufacture.