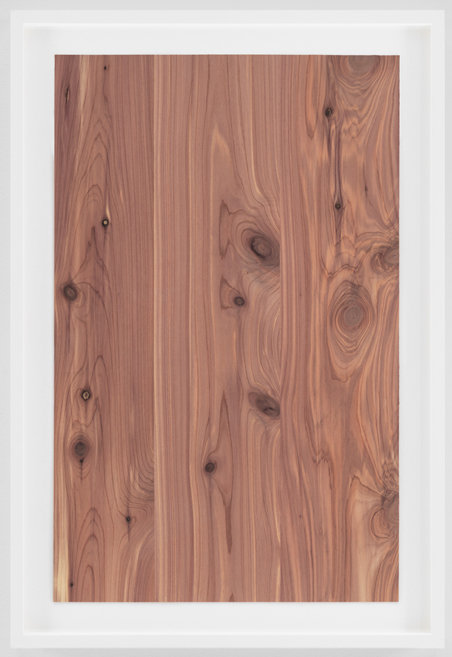 Courtesy of the artist and Mitchell-Innes & Nash

Triple Canopy is pleased to present a new artwork edition by Virginia Overton, published on the occasion of the magazine’s 2013 benefit honoring the artist and critic Brian O’Doherty. Overton is known for installations that place scavenged materials and those common to the manual trades into site-responsive configurations. An edition of sixteen, Overton’s Untitled (Juniper Veneer) expands on Overton’s recent work on the production and migration of wood veneer in the US, which was exhibited in 2013 at Mitchell-Innes & Nash and in 2012 as a billboard installation in her hometown of Memphis, Tennessee. “The works’ scavenged, repurposed materials and their single source allude to societal shifts, like the steady transformation of American farmland into exurbs, a change stalled in recent years by a dismal housing market,” Andrew Russeth wrote of Overton’s exhibition in GalleristNY.

Overton lives and works in Brooklyn. She has presented solo exhibitions of her work at Kunsthalle Bern (2013); Mitchell-Innes & Nash (2013); The Kitchen, New York (2012); The Power Station, Dallas (2012); Freymond-Guth, Zurich (2011); and Dispatch, New York (2010). Her work is currently on view at the Westfälischer Kunsteverein, Munster, Germany.