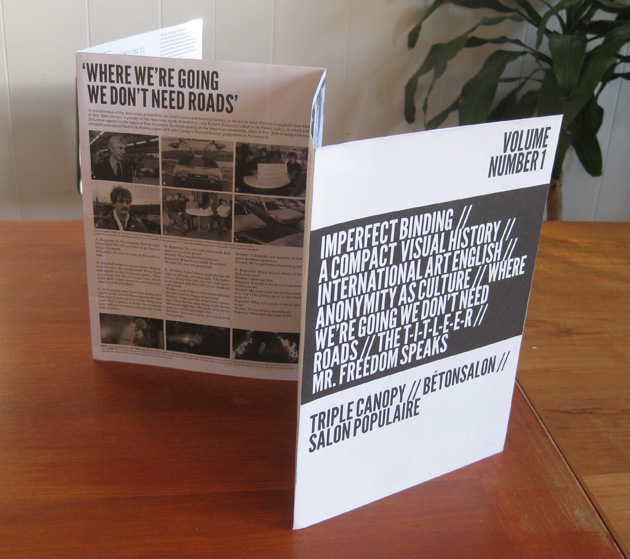 Triple Canopy is pleased to announce Volume Number, a publication cycle that reimagines the magazine as a framework for activities that occur beyond—but are ultimately enfolded by, and digested within—its pages. In the coming months and years, Triple Canopy will produce a series of publications, in formats ranging from the broadsheet to the PDF to the poster, that emerge from and feed back into discussions, workshops, and other public engagements. The publications aim to be generative rather than documentary, absorbing these engagements rather than merely representing them. Instead of simply printing the work of artists and writers, Volume Number will provide a variable space for Triple Canopy’s editors, collaborators, and audiences to think through—and enact—the practice of publication, instantiating the public spaces magazines purport to produce in the world.

The first edition of Volume Number, a broadsheet called Factual Decoys, was produced in November as part of the curatorial program of Artissima 18, “Simple Rational Approximations.” The publication includes contributions from David Auerbach, David Levine and Alix Rule, Alexander Provan, Wayne Koestenbaum and Ben Tiven, Salon Populaire, and Caleb Waldorf, and was designed by Alex Lesy. Click here to download the PDF.

Future editions of Volume Number will be produced in February and March as part of Miscellaneous Uncatalogued Material, Triple Canopy's contribution to Print Studio, a series of public programs at the Museum of Modern Art in New York coinciding with the exhibitions Print/Out and Millennium Magazines; in June in and around Sarajevo, in collaboration with the local arts organization NO(W); and in November as part of the Denver Museum of Contemporary Art’s exhibition Postscript: Writing After Conceptual Art.