“It won’t take long,” Helene was saying. I was having a little trouble hearing her; it sounded as if she were standing beneath an overpass. “In and out. I promise. You don’t even need to be there.”

“It’s, sorry, it’s for a catalogue?” I’d been sitting at the kitchen table balancing my checkbook when Helene called. Before answering the phone, I’d capped the blue pen I’d been using for my calculations and placed it between two lines of my legal pad. The entire time we’d been talking I’d been looking, vacantly, at the three plants I kept on the windowsill above the sink; I suddenly realized that the middle one, a small mint I’d bought a couple months before, was dead.

“It would be a catalogue of your possessions. Things you have bought, inherited, been gifted. That’s all.”

“Sure. I mean, sure. Tomorrow?” I’d been planning to go walk around in the park for a few hours but could do that another day.

After I hung up I began feeling uneasy. Why had I agreed to this? I nearly spilled boiling water on my hand and tripped twice going up the stairs. Was it too late to back out? I took a shower and paced in the tub, even though it was slippery. I could have very easily fallen and broken my wrist, or struck my head against the edge of the tub. One of my father’s old friends had died in precisely that way just a few months before I was born.

I spent the next morning tidying; she appeared at noon. She shrugged off her coat and slipped out of her shoes, thanked me. She pulled pen and paper out of her bag and said if it was alright, she would begin. She told me I could do whatever I wanted. She immediately turned to a small bench I had in the foyer and began writing in her notepad.

I wandered upstairs. Even though I’d dusted, cleaned the windows, gone over all wood surfaces with a bit of vinegar, I immediately noticed a few spots I’d missed … a streak of grime on my desk, a dust bunny behind the cabinet. I was beginning to sweat. I wiped my shirt on the desk, put the dust bunny in the trash, and returned to the middle of the room. There were little flecks of mud where I’d stepped on the carpet. My clothing felt too tight. I went back downstairs.

“Sure,” she said. I filled a glass in the kitchen.

“How’s it looking?” I asked. Helene took a few sips before answering. I could see condensation where she set the glass down on the coffee table and bit my lip. If she didn’t mind, why should I? Was I doing something strange with my hands? I put them in my pockets.

“Looks good,” she said. “Almost finished with the living room.” She seemed to welcome the interruption. In spite of myself, I was pleased. She sat on the couch, looking perfectly at home. “Is that coffee table new?” 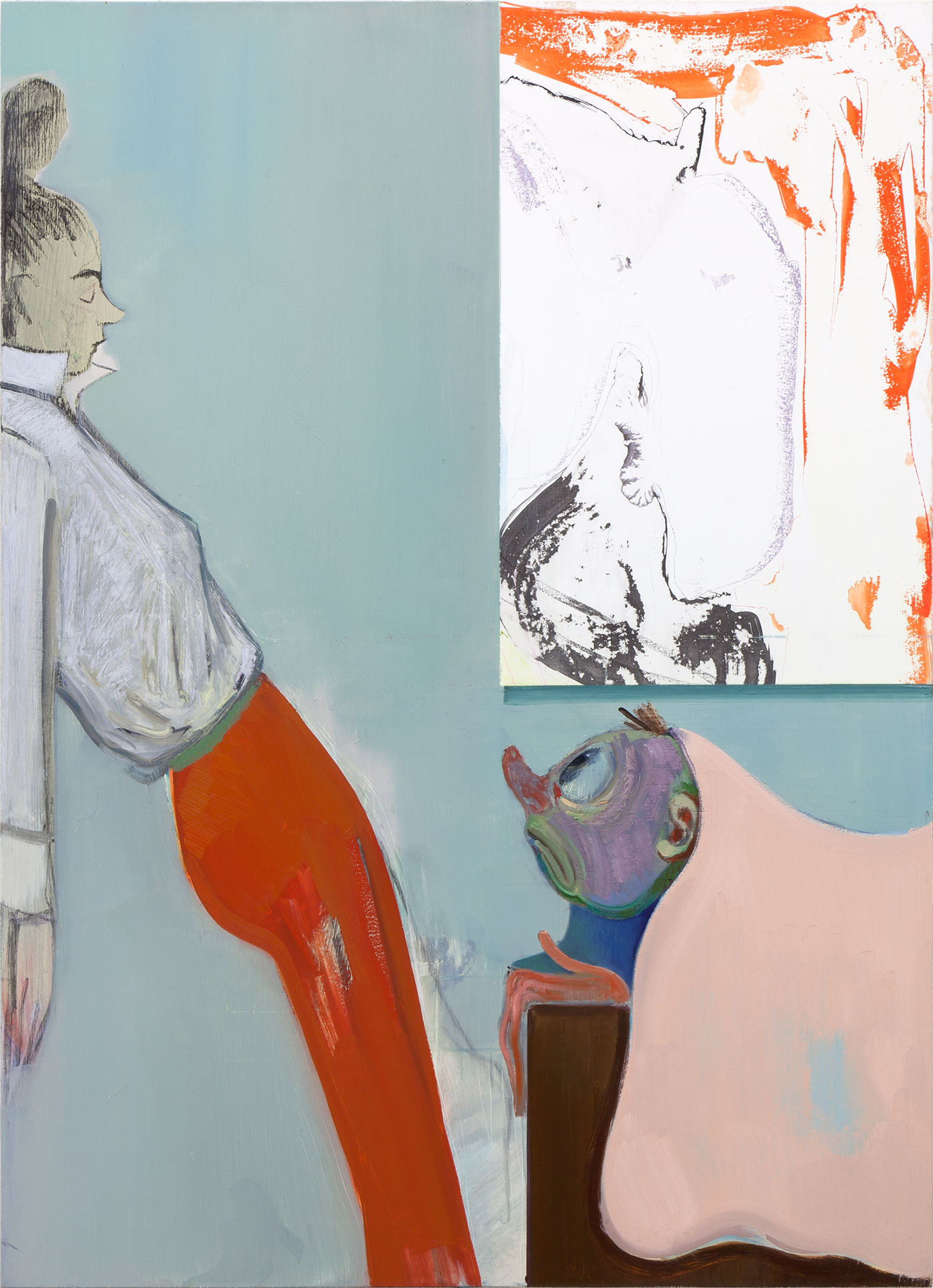 “Oh, maybe, new to you,” I remarked cleverly. “I got it back in, I guess, October, and the last time you were here was—” We talked about the coffee table, the rug, the curtains, until I wasn’t sure what we were talking about. She flipped the notebook closed; the cover was scratched and ripped, the spiral binding warped from mistreatment. I wanted to grab it from her, tear the cover off, for surely it would fall off in the next few days anyway. I wanted to see what she had written, in what order she had recorded my … whatever these should be called, things.

She was saying something about some guy she’d broken up with, but I was only half listening. Was this whole thing a pretense? For what? To rob me? That was ridiculous. Now she was saying something about her sister—was I being seduced? My hands instinctively flexed. I hadn’t considered that. I wandered upstairs, took a shower to demonstrate comfort, wandered back down. She was in the kitchen, on her knees, up on the kitchen counter, going through plates I kept in the cupboard over the sink.

I set out for the corner store. As I walked, I rifled through my coat pockets: the soft edge of a Trident wrapper, a balled-up receipt, my two keys on their brass ring, the beaten leather of my wallet, three quarters, two dimes, and five nickels that shifted against one another with my stride. Had she accounted for these things? I made a mental note to email her later, in case she wanted them, too.

When I returned two hours later, I let myself in softly, so as not to disturb her. After hanging my coat up, I paused, ear tilted toward the ceiling. No sound. Waited longer. Still silence. I removed my shoes and set them underneath the bench.

Upon inspection, everything on the first floor looked the same—toilet seat down, cupboards closed, and so on. The second floor, though, seemed much emptier, until I came to my bedroom, and found that Helene had assembled some sort of mass at the foot of my bed. I thought at first that she was crouching there, perhaps to surprise me, but once I flicked the light on I saw it was just things. She’d assembled these things into a shapeless, freestanding structure. The mass was draped in blankets and pillowcases. Only by concentrating, and unfocusing my eyes, was I slowly able to recognize the distinct outlines of a few of my things: A keychain holding thirty or forty pairs of house keys; the 13" Maglite I’d bought the previous spring, when there’d been that rash of robberies; the Ruger LC9 handgun I’d bought the following fall; cloth diapers, the good kind; an old mask I’d found in a costume shop in Florence. It was matte black and very generic-looking, as I recalled, smooth and round, without any filigrees or details, as if designed to be worn in a production of Balanchine’s Agon. I hadn’t seen it in years, I had no idea where Helene had found it. It appeared to be facing me, deep in the pile of things.

I had to know why she’d done it. It must have been out of convenience, to help her in the process of making her list. Still, I didn’t want to disturb this gathering, in case she came back and was frustrated at having to build it all over again. She’d done me a sort of honor, I felt, in asking me to volunteer my house for her project. I did not want to disappoint her.

I went downstairs to distract myself from the pile … time passed quickly, shadows lengthened, and then it was night. I blinked and realized that she hadn’t returned. It was too late to call. I fell asleep wearing a sweater and sweatpants to compensate for the absence of my comforter.

The phone rang a little after noon. It was Helene.

“Sorry to run out without saying goodbye. We should grab a drink.”

“Oh? Oh! Right! That was just … I forgot where I’d gotten everything from and I didn’t want to put anything back wrong. You’ve just left it …”

“Thought you were coming—”

I had the impression that I wasn’t able to hear her quite right.

“—all I need. Thanks again for letting me use your home! Really appreciate it. Bye.”

“Bye.” She hung up. But immediately after I put the phone down, I realized there had been something else I wanted to ask her … I picked the phone up and called her back. It went to voicemail. I could no longer remember what I wanted to say. I stared at a loose hair tie on the kitchen counter as there came the tone, then silence recording the sound of my breath.

“Repair, Then Dim” was published as part of Triple Canopy’s Immaterial Literature project area, which receives support from the Andy Warhol Foundation for the Visual Arts, the Brown Foundation, Inc., of Houston, the Lambent Foundation Fund of Tides Foundation, the National Endowment for the Arts, the New York City Department of Cultural Affairs in partnership with the City Council, and the New York State Council on the Arts.

19 It Speaks of Others