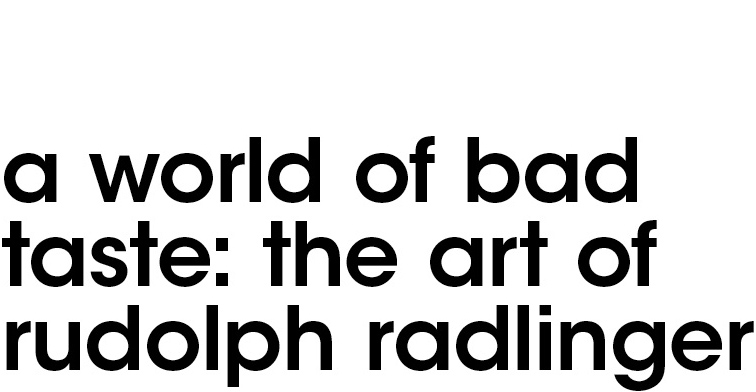 Barrister’s Gallery has been a New Orleans fixture since 1978, exhibiting folk and outsider art and, more recently, focusing on the work of mentally disabled artists. Director Andy Antippas discusses the photographs of Rudolph Radlinger, a reclusive Austrian artist who has lived in New Orleans for over thirty-five years. His singular aesthetic is an unlikely combination of classical kitsch, references to the darker moments of German history, and tattooed waitresses in pin-up poses.

The super-high Romanticism of late-eighteenth- and nineteenth-century Germany was a cauldron of kitsch, containing the constitutive elements of neurotic nationalism, which would feed the rise of the Nazi Party. From Nero to Mao, totalitarianism, with its theatrical, swaggering displays of self-importance, has been incapable of comprehending its own vulgarity; rather, it has created stages for kitsch, muddling the ethical and the aesthetic. In kitsch one can glimpse the potential for evil, among other things.

Radlinger’s pin-up photos of tattooed waitresses from French Quarter bistros, casually sprinkled with imagery seemingly lifted from a Bavarian chalet circa 1937, carry no such threat: This is kitsch for its own sake. His extreme overuse of the same limited props at his disposal—the American flag, a seashell, a Japanese umbrella, a bearskin rug, glitter, and baby powder—at once calls to mind and condemns the quaint sentimentalities of E. J. Bellocq’s photographs of prostitutes in Storyville, New Orleans’s fabled red-light district. Especially the glitter.