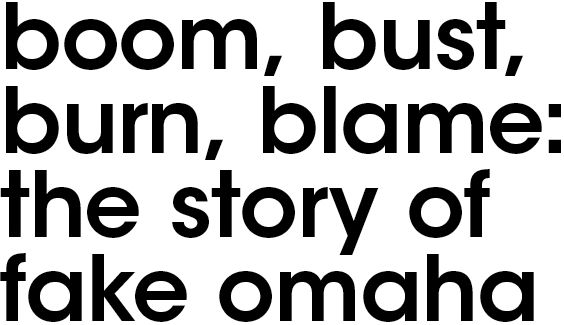 From CyBar Stadium to Soapbox Yards: an artist project considering the evolution of a paper-and-ink city.

I won’t bore you with a detailed account of Fake Omaha’s history. It is, after all, unsurprisingly similar to the basic life cycle of other American cities: boom, bust, burn, blame. What differentiates Fake Omaha is the amount of time it spent lingering between “burn” and “blame.” While other cities struggled to redevelop and reinvent themselves in the 1980s and ’90s, Fake Omaha was static; it seemed incapable of advancing the narrative it had created for itself, as if its identity had finally solidified around political morass and urban blight.

By the mid-’90s, urban crime rates across the country were falling, investment was surging, and populations were rising. Meanwhile, Fake Omaha, despite a handful of high-profile redevelopment projects, continued in its downward spiral. The city seemed to be a captive to its idyllic past (the story of a farm town–turned–industrial powerhouse) and beholden to its collapse: the grand deterioration of its buildings, its neighborhoods, its citizens. Only in the past five years, long after other cities had decidedly changed their direction, has Fake Omaha made a break with its past—as well as the politicians and builders who have defined it—and begun to piece together a plan for revitalizing itself.

Today, Fake Omaha has a lot of catching up to do, but few would deny that it is finally catching up.

The following documents have been selected from the Fake Omaha archives in order to provide a sense of the city to outsiders and illustrate its redevelopment efforts, with the hope that other struggling municipalities can learn from its mistakes and recent successes.

In addition to transit schedules, redevelopment reports, internal memoranda, intra-office communications, and remarks prepared for public officials, we have included aerial views of the city, so that readers may better orient themselves while navigating the city and its inner workings.

From the 1970s through the 1990s, the leadership of Fake Omaha failed to address the difficult issues facing the city in its planning and economic-redevelopment initiatives. Rather, many city leaders seemed content to maintain the status quo, obscuring the city’s problems as best they could, concerning themselves instead with political infighting and power grabs. Meanwhile, crime, poverty, blight, traffic, education, housing, and economic recovery fell by the wayside, with a generation of politicians favoring easily executed, glossy projects that they hoped would do the work of redevelopment for them.

Today, Fake Omaha is on the road to recovery.

It is easy to look back and blame the city’s failed leadership and its self-serving mentality for Fake Omaha’s protracted stagnation; but it must acknowledged that the projects of that era changed the city’s landscape in ways that we can still see, and in ways that must now be dealt with.

A prime example is the new stadium built under Mayor Bruce Bowman in 1995 for the Fake Omaha Ferrets. In the early ’90s, the Ferrets were outgrowing their neighborhood ballpark. Though a minor-league team, the Ferrets boasted a tremendous local following, and the idea of a new stadium won the favor of fans, owners, and politicians alike. Recognizing the widespread appeal and noncontroversial nature of the project, Mayor Bowman made a new stadium the centerpiece of his first term. Built with over $30 million in public funds, CyBar Stadium was a state-of-the-art design that included an impressive array of features—some of them functional, most just for show.

While the stadium breathed some life into the edge of downtown, urban officials never took advantage of its potential role as an urban destination. The combination of faulty traffic engineering and the design’s lack of sensitivity to the site’s context made game days a headache. Fans didn’t want to spend any more time in the mess—what came to be known as “the Ferret cage”—than necessary. On off days, the stadium sat dormant, unconnected to the rest of the city, with a deadening effect on the surrounding neighborhood.

From the beginning, neighbors decried the 11,000 surface-parking spaces and off-ramp-inspired driveways. Mayor Bowman couldn't grasp the criticism: It was the stadium that would bring development and resurgence and investment; the parking and access arrangements were just details. The stadium’s fathers lamented that the nearest freeway was two miles away, so rather than slipping right off 137 and into the parking lot, fans had to channel in along Fountain Street, Electric Street, and Walker Avenue, where traffic moved along at a crawl. Soon enough, the spin-off activity envisioned for eight-lane Pavilion Boulevard was sprouting along these narrow city streets. The stadium did end up promoting local business indirectly, but only in adjacent neighborhoods not marred by the presence of the forbidding “techno-sport” structure.


From an internal memorandum.

My office has received numerous comments regarding the wave of new projects proposed for Downtown, The Felix, The Reserve, and Seis Sur. Some residents have praised these ideas as “innovative” and “badly needed.” However, others have raised concerns over the feasibility of these projects. It is our job to examine all projects for the impact they’ll make on the city’s priorities. From my own standpoint, the layouts, design principles, and site plans of these projects are reason for concern. My immediate staff has compiled a list of 14 proposed projects; we’ll review all of these privately. Before we do that, I am calling a mandatory meeting for all staff to go over two projects that are of particular concern:

1) The Albright Pier development (810-870 North Fountain Street), which is already under construction. In this case, the developer is planning a large, open-access public square as the centerpiece of the project. We don’t see how this will benefit retailers or residents. Past studies have shown that people can be enticed to visit Downtown if they know they will encounter a safe, clean, family-oriented environment. Historically, Downtown redevelopment projects have failed because of the city’s inability or unwillingness to restrict and monitor public spaces in such a way as to assure this experience. As we’ve so far had little success integrating commercial and residential developments, I’m hesitant to support this project.

2) The Soapbox Yards development (main project office at 2621 Nearslope Place), which is currently caught up in the permitting process. Here, the developers are proposing extensive renovations to old warehouses that we’ve targeted for demolition. The city’s own redevelopment plan for the area, formulated and presented to the community last year, proposed a big-box retail center to create a commercial core in the area; it was to be accompanied by a gated townhouse-style residential development. That plan was challenged by community organizations that lobbied for the preservation of the historic mill complex, chief among them New Day Development. The plan they support, submitted by Wagner Bros., is for a mixed-use facility with storefronts on the street level and a combination of market-priced and low-income housing on the upper levels. It aims to “take advantage of the site’s location at the crossroads of three historic and culturally vibrant neighborhoods”—one black, one white, and one Hispanic.

In the past, such projects have been undermined by existing tensions between these groups, which has discouraged interest among young professionals, and as of yet I have no reason to believe this will not be the case with Soapbox Yards. Furthermore, the project banks on the notion that an expensive renovation of historic architecture will be more appealing to the desired inhabitants than the use of generic architecture (the success of which has been proven elsewhere), and disregards proven draws such as abundant parking, family restaurants in the proximity, and the presence of national retailers.

You are all required to attend a meeting regarding these projects. It will take place on Monday, August 17, at 12:30 pm in Room B031 (next to the cafeteria in the basement). No food is allowed in the conference room, so you’ll have to take your lunch on your own time. Due to the recent court injunction, I am required to open this meeting to the public. However, I don’t expect many members of the public to attend.


From an email between planning managers.

I think Curtis was looking at you and me when he mentioned community outreach near CyBar and Soapbox. Maybe we should meet for a minute after lunch tomorrow and figure out how to tackle this? I don’t know about you, but I’ve done a few meetings in that neighborhood. They’re always talking about sidewalks and low speeds and kids playing outside—and they like Wagner/New Day’s version of Soapbox Yards more than they like ours. They have a sentimental attachment to some of the local businesses that are still open there, but I don’t think any of them even go there. I mean, have you ever seen them at the pupusa place? They talk about how great the pupusas are but I bet they’ve never even been there. What is a pupusa, anyway?

In any case, we need to figure out how to convince them that the Soapbox plan isn’t going to work, regardless of how good it makes them feel. We need to look into that lady who came to the meeting to see if she's working with New Day. Please find out more about her. I think she signed in on the clipboard. Talk to Karen and see if she held on to the sign-in sheet. And tell me ASAP what time you can meet tomorrow.

PS: I think Curtis’s diet is actually working. He kept pulling up his pants in the meeting.

PPS: Drinks at The Paddywagon Weds. at 8. Are you ever gonna ask that bartender for her number?

• This isn’t just a stadium. It’s a linchpin for rebuilding the entire city.

• We’re pleased to enhance business in the neighborhood with the addition of 11,000 new parking spaces.

• We’re hoping for several million dollars in spin-off development. We envision that the good energy created by CyBar Stadium will encourage entrepreneurs to take new chances. (No specific plans for new business development, so skirt issue!) Mayor Bowman has told me that he already has letters of interest from Hooters, Best Buy, and T.G.I. Fridays.

• The whole state is proud of the City of Fake Omaha and Hastings County, which together pulled in $30 million in public money to make this dream a reality.

• As part of the construction, we improved roads, sewers, and other infrastructure. We couldn't have justified doing so without the stadium project.

• We hope that tax revenues generated through the stadium will help the city and county fund public projects.

• We weren’t able to locate a suitable site near any freeway, but I’d like to remind all fans that CyBar is less than ten minutes from three different freeway access points.

• This project is a great public-private partnership.

• This project is the first proof of our urban redevelopment strategy with its focus on landmark projects that will establish the city as a destination.

• Many challenges remain. But the innovation of Mayor Bowman and the commitment to promoting Fake Omaha will keep us moving forward.


Photographs by Bridget Finn. For more on Fake Omaha, read an interview with Neil Greenberg.