In Salt Lake City’s suburbs, the newest great dead American economy lies in wake atop the rumblings of the last one.

Eighteen miles south of Salt Lake City, Utah, in the suburb of South Jordan, Kennecott Land is building Daybreak, a twenty-thousand-home development. When it’s completed, Daybreak will be the largest planned community in Utah, and one of the largest in the nation. It will extend twenty miles from South Jordan to the Great Salt Lake, stretching over forty-two hundred acres of “surplus mining land”—formerly mining tailings and settling ponds—bought throughout the 1900s by Kennecott Land’s much older sister company, Kennecott Copper. The seven thousand homes of Village One, the first phase of Daybreak’s seventy-year master plan, were completed in 2005; a second “village” of equal size is currently under construction.

Bingham Canyon Mine, owned by Kennecott Copper, is known as “the richest hole on earth.” It is also one of the biggest holes on earth, visible—along with the Great Wall of China—from the moon. Open-pit mining was invented at Bingham more than a hundred years ago, and the mine has been in operation ever since, producing more copper than any other in history. Today, Bingham is the nation’s second-largest copper producer, running twenty-four hours a day, seven days a week, about six miles from what is now Daybreak.

In mining, they say something valuable is a head; a tail is waste. Bingham’s tailings impoundment, having been moved several times to accommodate its ever-widening girth, stretches for several miles along the Great Salt Lake and is about 99 percent as large in mass as the volume of the empty pit. Since copper ore was first recovered at Bingham in 1903, Kennecott has methodically purchased sizable tracts of land surrounding the mine as environmental liability: the deeper the pit, the more space needed for the removal, isolation, and neutralization of the millions of tons of overburden and toxic waste produced each year. Today, Kennecott owns more than ninety-three thousand acres of land in the Salt Lake Valley.

When the British-Australian mining megacorporation Rio Tinto bought Kennecott in 1989 during a depression in metal prices, surveying teams taking stock of the company’s new real estate saw an alternate vision for its use. In 2001, Rio Tinto launched Kennecott Land, which immediately began planning Daybreak—a suburb that would be subsidized by the heads of the mine and built atop its tails. 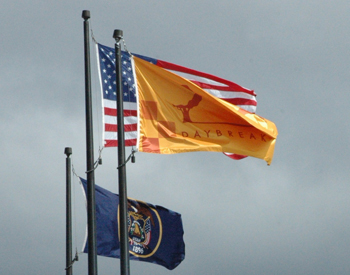 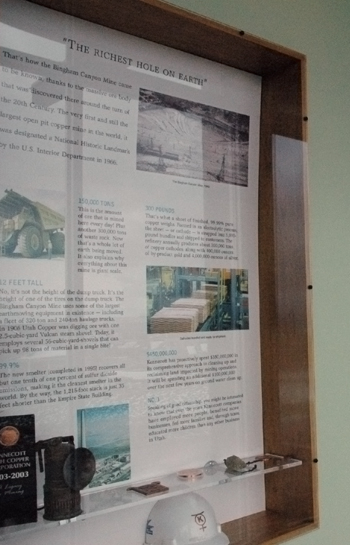 Make Yourself at Home

In the center of Daybreak stands a glass-walled Information Pavilion, where Kennecott Land representative Myranda Baxter welcomes prospective homeowners and tells them about the development. Despite the mine’s constant operation, the Information Pavilion is focused exclusively on Kennecott Copper’s postmining legacy. The term adorns a poster marking an out-of-the-way vitrine stocked with rusted artifacts of old-time mining—the only place in the pavilion where the mine itself is mentioned.

If the display of pickaxes and century-old headlamps harks back to an earlier time, the designs of Daybreak’s model homes embody many earlier times at once. Kennecott boasts ten different “Guest Builders,” each working under separate contracts with individual home buyers. The result is a mélange of styles that transport residents from one age to the next as they walk down the block. Facades jump from Arts and Crafts to Colonial Revival, from Victorian to Tudor shingle.

On the next page, Myranda goes into detail about a few of these homes.

to begin the slide show and

to turn the audio on and off. The audio loops automatically and must be turned off before you move to the next page.

Daybreak was planned in accordance with the American design philosophy of New Urbanism, which aims to produce “walkable, diverse, and sustainable” communities that are fully engineered, from the sidewalks and homes to the transportation routes and civic structures. Kennecott Land recruited Peter Calthorpe, one of the movement’s founders and the first president of the Congress for New Urbanism, to act as Daybreak’s chief planner. He has provided residents not only with houses constructed by their choice of builder—prices range from the hundred thousands to more than one million dollars—but with the plans, at least, for a complete urban experience, including workplaces and recreational areas.
Daybreak includes an elementary school, a community and fitness center, sports fields, and a sixty-thousand-square-foot temple of the Church of Jesus Christ of Latter Day Saints built on a sprawling eleven-acre lot. A second church is under construction, as are a host of commercial centers that will one day house big-box retail outlets, smaller franchises, and a smattering of “Mom & Pop” shops. Bright signs hanging from chain-link fence on the edge of Village Two promise a light-rail system for commuters who work in Salt Lake City, a University of Utah satellite campus, and twenty thousand new jobs. After work and on the weekends, Daybreakers can retreat to the sixty-acre lake, take the kids to the community pool, or enjoy movie nights in the park. The only thing missing is a cemetery; despite all the far-reaching plans, there is none in the works.

On the next page, Myranda discusses the Village Center. 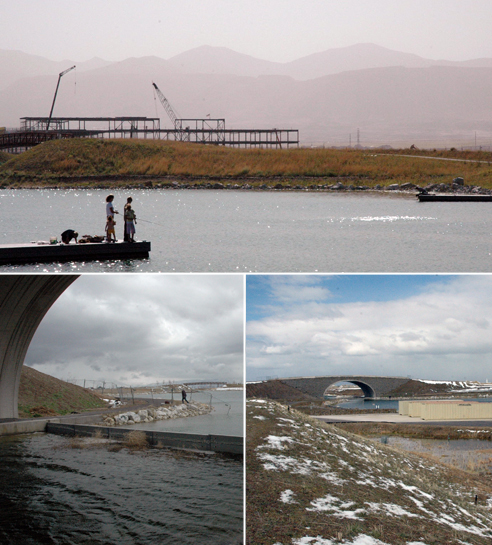 As Much Thought as Water

“We’ve put more thinking into the design of this lake than any I’ve seen.”
—Russell Sanford, vice president of land development, Kennecott Land

Oquirrh Lake is the centerpiece of Daybreak’s commitment to leisure time. The sixty-acre manmade body of water is framed by a perimeter of lush natural grasses and lined with a multimillion-dollar synthetic sheeting system that seals it from the contaminated soil below. As the ground beneath Oquirrh Lake is still a brownfield, swimming is not permitted, but there are ducks to feed, and there is catch-and-release fishing (the lake is regularly restocked with tens of thousands of local species). The lake is currently in the first of three phases of construction, and its acreage will eventually be tripled.

Construction on Daybreak began in 2004, at the peak of the housing bubble. As in the rest of the country, the market’s crash has devastated the suburbs of Salt Lake City, and Rio Tinto is now reconsidering the size and scope of its development. In the meantime, it’s turned its attention to expanding Bingham Pit’s digging operations in order to extend the mine’s future beyond its prospective closure date of 2018. Engineers are studying the possibility of building a deep underground mine around the edge of the pit, which at its center descends three-quarters of a mile, in order to recover new ore deposits once surface mining has been exhausted. Exploratory drilling (on land earmarked for Daybreak) has shown deposits of high-grade ore.
Without issuing one of the customary press releases that accompany every new development in Daybreak, last year Kennecott Land shortened its master plan from seventy to twenty years. As the profitability of industrial-scale real estate development in the West has collapsed, with no recovery in sight, the allure of regular old mining has grown. But nothing is certain, and plans for Kennecott’s mining and real estate operations still change month by month. Meanwhile, inside Daybreak’s thousand inhabited homes, life goes on much as it did before. 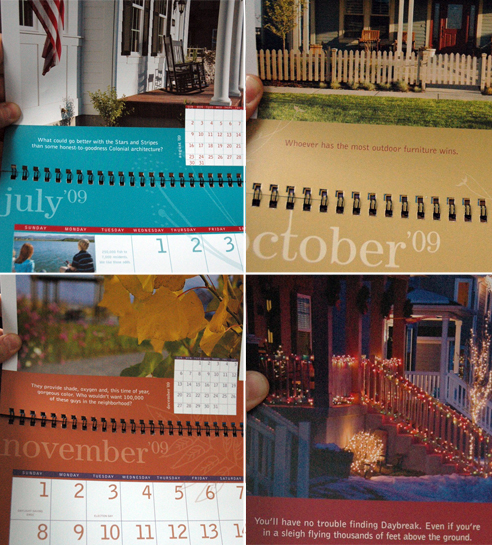 The Kennecott Land calendar, available as a freebie at the Information Pavilion, tells prospective residents what they can expect life in Daybreak to bring each month.

July: “What could go better with Stars and Stripes than some honest-to-goodness Colonial architecture?”

September: “Dramatic sunsets can cause great indecision: fish or kayak? Or go out in the canoe? Or the paddleboat? Or just walk around the lake? Or…”

October: “Whoever has the most outdoor furniture wins.”

November: “They provide shade, oxygen, and, this time of year, gorgeous color. Who wouldn’t want 100,000 of these guys in the neighborhood?”

December: “You’ll have no trouble finding Daybreak. Even if you’re in a sleigh flying thousands of feet above the ground.”

On the next page, views from thousands of feet above Daybreak…
Get the Flash Player to see this rotator. 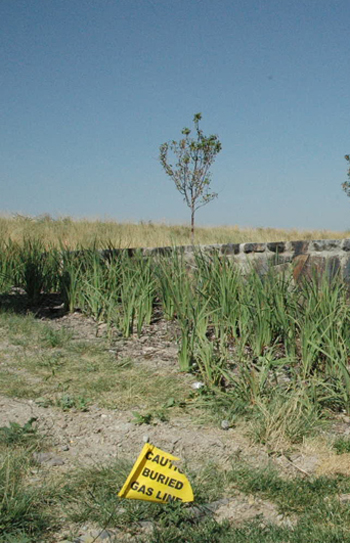 Welcome to the Neighborhood

One of Daybreak’s signatures is the absence of street-level power and gas lines. The town’s system of wires and pipes, made from copper bought on the global market from a variety of international suppliers and distributors, is buried beneath neighborhoods funded by the extraction of ore just down the street. Elsewhere, too, the armature of construction, maintenance, and control is barely visible: The lawns of occupied and empty houses alike are all manicured to an exacting standard; public facilities are neatly maintained regardless of how often they’re utilized; security cars circulate soundlessly, patrolling day and night. The porch of every completed home is decorated with a wreath and some form of seating for two. The blinds are almost always drawn.

On a recent visit, many of Daybreak’s homes seemed as vacant as the unbuilt lots surrounding them. The more elaborate the “vintage” architecture, the more each structure resembled a headstone, with each facade a freshly inscribed epitaph for the boom-and-bust company town, signaling a new day breaking on the waste heap of our postindustrial—but not quite postmining—economy.

On the next page, some of those homes.

All images and sound by the author. Special thanks to Mike Olenick. Thank you to the Wexner Center for the Arts, and the Center for Land Use Interpretation.