The Roma build their palaces just like the rest of us, one cinder block at a time.


TIMOSORA, ROMANIA Like Saint Petersburg before she was operated on for her three-hundredth, the brie-colored streets and decaying facades have a dusty continuity. Against this backdrop, the Roma build their Disneyland.

Forced by the Communists to settle in the ’60s, they have embraced a style of permanent renovation. Their mansions, in primary colors, stick like fingers in the dead dictator’s eye. But this provokes nothing beyond tourists snapping photos and locals shaking their heads.

“How do you think they pay for them?” they ask me and then spit.

Gypsy mansions are confusing. Though they are decorated with wild variation, their structural similarities are apparent. The mansion plans are essentially standardized: All rooms branch off a central corridor, and none have direct access to any others; but there the standardization ends, and this is not so surprising. Mansions are primarily structures of one-upmanship; eternal construction sites of dubious habitable value (they are often abandoned, though this could be because the settlement policies went with the Communists) that rise as barometers of personal (male) status, they are intensely decorated sheds with few interior complications.


They all have fences, and this isn’t their only concession to the economic realities of living in palaces: Their paroxysms of decoration hide quality Soviet-bloc construction. Though the modest ones might be only three stories of stucco on cinder block with simple roofs, their architects—the family chiefs—apparently design them all the same way. Ornamental details are collected during travels until the stash is sufficient to sustain construction, or at least addition to an existing structure. I’m tempted to speculate on an obsession with competitive architectural bricolage.

The chief is usually the fellow you’d expect him to be, the one with a solid-gold necktie, a round belly, and an enviable mustache. But there must be others: wise women and wrinkled bullies, drug dealers and car salesmen who’ve become rich, then powerful. Their mansions probably look the same, right down to the golden cutout of a Mercedes on the roof catching the dusk light.

A style defined by reaction cannot sustain agglomeration. Build too many examples near one another and it becomes hard to take any of them seriously. This makes it difficult to imagine villages of these mansions, such as Bărăgan to the south of Bucharest, where the difficulty of producing sufficient contrast engenders some really wild solutions. Or so I hear.

Everything I know is hearsay colored by Romanian discomfort with the Roma. The Timisoara mansions were isolated, silent, and dark—except for garage lights. It could be the gypsy equivalent of a suburban porch light, meant to deter burglars, though each house already has an iron gate with a crest of orderly spikes. What are they worried about? 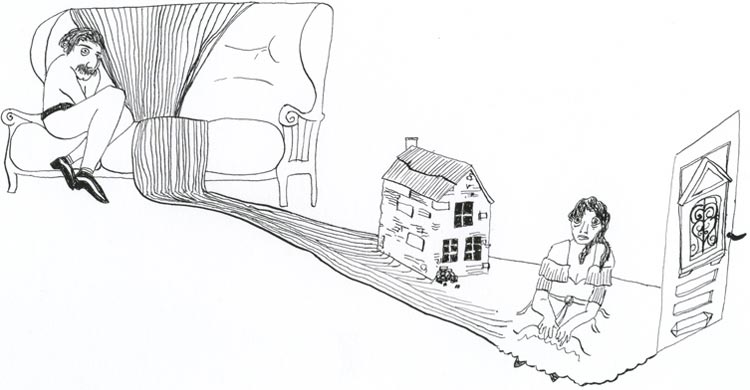 The Romanians I met liked to speculate on mansion fund-raising. One friend's theory: The money collected by pan-European begging is funneled through secret underground channels to build empty palaces in Eastern Europe. Families who return from working abroad spend all their savings on a new house and must live in one destitute room to save on heating and electricity. This would require a vast, highly organized network.

Once you learn that the gypsies probably came from India, the buildings take on an Eastern cast. Towering hunks of concrete and bulky columns become minarets and colonnades; even the characteristic stamped-tin roofs cry out for South Asian sun.

Inside are floral prints and bright wallpaper, maybe plastic-covered couches. The music and the dresses I have to imagine.