The first installation of an ongoing project memorializing desecrated, destroyed, and forgotten buildings. Sculptures constructed from images submitted by readers.

Sonya Blesofsky and I first discussed Internet as Material—a project intended to facilitate the creation of original work specific to an online space, by visual artists who have never done such work—in January at her studio in the basement of Brooklyn’s Smack Mellon gallery and workspace, where she spent the last year as an artist-in-residence. She had just completed a full-scale re-creation of the industrial building’s original boiler system (Study for Gair Boiler, 2008). The facsimile, over thirty feet tall and fabricated with brown packing paper, cardboard, tape, glue, and string, was now installed directly below the intact coal trough that once fed the boiler. During the opening for the exhibition featuring Gair Boiler, I remember Sonya nervously glancing over her shoulder as children chased one another from the white walls to the bay windows and around the century-old wooden columns that ringed the sculpture, which seemed to tremble with their every footstep.

Sonya makes structures that invite you to reach out and test their durability, even if you know the tin foil, masking tape, vellum, or wax might give with the slightest touch. Beyond using the Internet as a research tool—that night, images of similar boilers from the same period, culled from Google image searches, adorned her studio’s walls—she had never worked in a digital medium, aside from making a few videos. I’m not a programmer, and my explanation of Internet as Material likely confused both of us. We talked about making something that worked against expectations of speed and notions of “interactivity” so easily pinned to Web-based art, which led us down an implausible path: customized plug-ins, digital construction materials, decaying code. 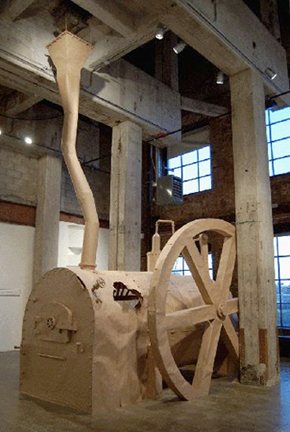 Sonya’s work derives from her deep investment in the metamorphosing (and in places disappearing) urban landscape of Brooklyn and of her hometown, San Francisco. Inspired by derelict transportation lines, collapsed bridges, and urban renewal, which aims to supplant (or “reuse”) these relics of a city’s history, she spends months meticulously crafting surrogate structures. Over the course of an exhibition, she allows them to fall into disrepair; if any works have not come apart by the end, she deconstructs them herself.

Thinking about this process as a kind of performance as much as it is sculpture, we eventually arrived at Homemade Memorials. In it, Sonya encourages viewers to contribute images of buildings they consider to be in danger of being desecrated, destroyed, or in any way lost or forgotten. With these submissions as her starting point, she’ll construct sculptures of the buildings, using materials within immediate reach at her home. The resulting sculptures will be photographed and presented here in future issues, along with the location of each edifice and any comments from the person who submitted it.

To submit, please email iam@canopycanopycanopy.com a photograph and brief description of a building in danger of being desecrated, destroyed, or in any way lost or forgotten.

Sonya's first sculpture for Homemade Memorials is based on a photograph by Kora Manheimer depicting a common sight in New Orleans: the striations etched into a home by the flood waters that lingered for weeks after Hurricane Katrina. View the sculpture.