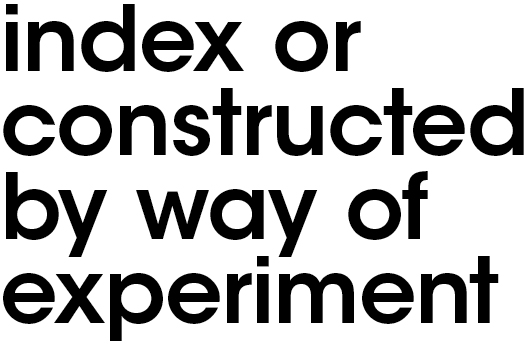 Supreme geometries and densely packed buildings: an artist project cannibalizing the sites and structures of modernism in Mexico City.

It is because we never had grammar books, nor collections of old vegetables. And we never knew what urban, suburban, frontiers and continents were. We were a lazy spot on the world map of Brazil...

Down with the reversible world and objectified ideas. Cadaverized. The curtailment of dynamic thought. The individual as victim of the system. Source of classical injustices. Of romantic injustices. And the forgetting of interior conquests.


index or constructed by way of experiment was conceived by José León Cerrillo as the Internet-based variation of an existing sculpture, having to do with suspended symbolic efficiency (2008). First exhibited at Dispatch Projects in New York, that work is composed of a rack of posters emblazoned with archetypal abstract and architectural forms, drawn from the modernist idiom and the cities of Latin America, respectively. The posters are semi-transparent, and as viewers flip the windows of the rack, they obliterate images as others emerge.

Those posters are repurposed in index along with additional animated motifs that lead the viewer through momentary negotiations of the tenuous and torn relations between the past century’s utopian structures and the culture of those people meant to be stored in them. The step-pyramid of Chichén Itzá runs up against the endlessly repetitive hues of low-income housing in Ixtapaluca; Lizardi’s El Periquillo Sarniento, published in 1816 and purported to be the first American novel, speaks through the 1968 “Black Power Olympics” and concurrent massacre of three hundred demonstrators in Mexico City; Mario Pani’s massive Nonoalco-Tlatelolco housing projects sit atop Le Corbusier’s Modulor proportional scale.

Andrade’s manifesto is a touchstone for Cerrillo. The Brazilian poet suggested, ironically, that in order to develop their own literature, his countrymen should learn from the natives who had cannibalized the first European colonists in order to acquire their strengths. If Brazilians were to apply that method to the arts, surely they would soon have a respectable national style. Of course, this parodic proposal predicted the shape that Latin American architecture and urbanism would take over the course of the twentieth century.

Cerrillo’s work echoes these cannibalizations and acquisitions. “Tudo esta visto,” reads the text cascading down one frame (a quotation from Augusto de Campos's revision of the cannibal figure in Andrade's manifesto): Everything is seen, but no orientation emerges. The work is, in Cerrillo’s words, “a map with which to read another map.”


On the following page, click the left or right panel to navigate the project. The work repeats infinitely.

Special thanks to Manuel Alcala and Julian Osti for their programming assistance.