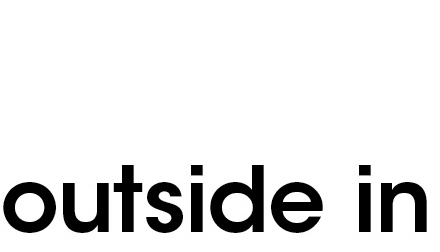 A version of “Outside In” was read at New York’s Oliver Kamm/5BE Gallery in 2006, as part of the show “Street Poets & Visionaries: Selections from the UbuWeb Collection.”

This is, by the way, a poem.
Perhaps you need to be
told. I approach these scraps
with some trepidation, natural,
under the circumstances.
I hope to be comprehensible and
to avoid unnecessary obliquity.
Yet I feel, today, again, an inexplicable
longing to be oblique.

Outside in.
This question—have outside-art practices moved inside?—puts me
in an uncomfortably elegiac position.
I feel called upon to deplore the
inexorable migration of outsider
practices inside. Perhaps I’m supposed to shrug my shoulders, buck up, find wily
ways of building a new outside, quick,
before it migrates back inside. Problem:
I’m not adept at recognizing whether an event or artifact is taking place
outside or inside. This non-adeptness
isn’t a result of some extraterrestrial
handicap on my part—it’s simply a
matter of how much time I spend
alone, navigating my own thoughts,
constituted by nothingness and
empti-ness, a salutary and chosen
auto-evisceration.

(My favorite new concept is autophagia,
which I plan to practice frequently.)
The moment when an artifact or
performance might be said to be
occurring “inside”—this interlude
lasts only so long—and before you know
it, that interval has passed, and
the issue (painting, poem, song, shoe,
explosion, neighborhood, scene, dance,
food, novel, film, concept, scrap)
has moved elsewhere, into oblivion,
where most experiences dwell;
into oblivion will go anything we
consider an “inside” practice, and this
oblivion—peaceful, Elysian, like a rare-book
library that no one visits—always
accepts admittees to its fold. We might
agree to call a place, and a taste, an
“inside” only because at some time
this taste makes money, or turns
objects into money, or puts those
objects in a push-me-pull-you relation
to money. By “inside,” I mean not know
they could be currency.
I may be wrong. To remedy the error, I will change the subject. I will put forward a general axiom,
and then I might give an example.
(Axioms don’t require buttressing or proof.

I thrive on axioms—their falseness, their
shimmering technique of being both
right and wrong, like sharkskin,
or like the difficulty of telling blue
and green apart in underlit rooms.)
Axiom: There exists a third space,
apart from “outside” and “inside,”
a zone that D. W. Winnicott called
play, that Kant, defining art, called
purposiveness without purpose,
that I call the inn of last
resort, or the playground of no
prisoners, or the detail
that engenders fantasy, or shimmering,
unfixable liminality, or mind
your own business, or I can’t explain
it, but I see it. Here we spend
our finest though unremembered
moments: the realm of Winnicott’s
relaxed undirected mental inconsequence,
of half paying attention—the zone where
something momentarily matters, we
can’t say why, we can’t defend
its mattering, and by the time
we’ve noticed that it matters,
this shade of meaning
has jettisoned

comprehensibility. This zone of interiority
is where, in split-second instants
of ratification and decisiveness,
meanings get made and then
abandoned. I’m inching, I suppose,
toward a specific example. Interior-
ity, as Emily Dickinson put is, is
where the meanings are, but she
put a comma between the words
meanings and are, because she wanted
to mark, as with a scar or a rip,
the moment before meaning enters the “inside”
of comprehensibility; she wanted to
play around with the pause, the
necessary, dumbfounded hesitation,
the scrap of an instant in which the
are—Being—hasn’t yet happened, is
still on hold, waiting.

I’m dying of impatience.
I’ve made clear some of my debts. I’ve
told you that I’m interested
in tiny, near-invisible navigations
of attentiveness and inattentiveness,

rather than
in the cultural location where the objects
to which we pay or do not pay attention
purportedly dwell. I am not interested
in the identity tags on
the merchandise. I am interested in what I see in
the merchandise, and I am most eager
to approach objects considered unmerchan-
disable, off-the-market—a taste I
share with some of you. I care less about
who made the shoe than about the
grime I notice
on its heel.

On an online auction site, iGavel,
I found, recently, remnants of the
estate of the late opera soprano Anna Moffo,
to whom I have devoted many
words, in the past, and many hours of purposeless, undirected meditation,
a process of perseveration not based
in drives or instincts, but in the
going-nowhere zone of play:
non-erotogenic, non-climactic, spaced-
out. The item that most

caught my eye, though I
did not bid on it, was a pair
of her Ferragamo pumps,
on sale for a modest price.
A set of four pairs
of nearly identical pumps
was offered at a starting
bid of $80. What arrested
me was the photo, posted
on iGavel, of one pump’s
sole—ostensibly shown to us,
on the site, to authenticate
the pump’s identity
(Ferragamo). And yet
possible purchasers
did not care whether
the shoes were Ferragamo.
The point of putting
the pumps up for sale
was that Anna Moffo once

wore them. That’s why we were shown
one shoe’s mildly gravel- and
dirt-stained underside.
Call it scuffed. It was a pump
enduring an intermediate position on
the spectrum between pristinely new
and worn-to-the-bone.
The pump was on its way to oblivion,
but someone pressed the pause button:
The pump stood, arrested, between use
and uselessness. The fact
that I noticed dirt and scuffmarks on the
bottom of her pump may have symbolic
meaning. We might file this fact
within the fetishism dossier, or
we might file it under abjection,
a folder already overstuffed. We
might file it under maso-
chism, or sadism. Or under
objet petit a. Certainly
the scuffmarks are an objet
petit a, an impermissible
and accidental springboard for
desire, a catalyst that is at the same
time desire’s castoff, its scuzzy
remnant. The pump seems to have
a cultural location—opera,
fandom, auctions, fashion, cultural

detritus, nostalgia, mourning,
collecting—and yet none of these
sites can explain the scuffmarks. No
system can claim my attention to these
stains. My captivation cannot
be sold. Nor can it be placed
inside or outside; it exists in neither
zone. It is simply a fleck of
dust, of outcast flotsam, that need
interest no one. If I were
a visual artist, I would make a
C-print of iGavel’s doubtless copy-
righted photo of the pump’s
underside. I would buy the pumps
and place them on a plinth in
the center of a gallery. I would hang
a juicy C-print of the sole on
one wall. On another wall, I would
place this text.
But I am not a visual
artist, and I am not depositing
my attentiveness to the scuff-
marks in any destination
that can be visited, except
(here I am behaving like a hypocrite)
these words. I needn’t insist that
these words are inside
or outside.
Push the button in front of you. Don’t ask anyone else’s opinion
about whether it

is the right button to push. If you
are captivated, push it.
One final example, one last
button. A year or more ago, the detectives
who keep the nation busy thought they’d
found the man who murdered the juvenile
beauty queen JonBenet Ramsey. But they
got the wrong man. He turned out not
to be the killer. Before authorities
discovered his innocence, newspapers
printed photographs of him, and in some
of those photographs, or at least
one, I noticed a spot of shine
on his forehead: sweat, or the stigmata
of a fatty diet, or the un-
flattering reflection of press flashbulbs.
I remember thinking, when I saw this
photograph, that my attentive-
ness to his forehead’s shine
was not part of the story’s
allegorical and juridical trappings;
the forehead’s shine was
a decision I had made,
a private instant of curatorial
whimsy. I had singled
out this shine and would do
nothing with it. It would
undergo no transformation
into art or story; I would not

mention it to anyone.
I would not even read the newspaper
story accompanying the photo.
I would file that shine
in the dossier tentatively
called reprieves from
certainty. I would file
that shine under ellipses,
vacancies, objets petit a,
random stains, scuffmarks
of no particular value or
meaning. I would file
it here, and leave its
interpretation up to you.