Light shifts in a visual field. Programmed by Seth Erickson.


THE COMPUTER SCREEN is a source of endless distraction. Overlapping windows compete for your attention, unread emails beckon, and the promise of updated websites curtails your patience. "Working online I oftentimes feel disconnected from my body," says Erin Shirreff, recounting the familiar experience of restlessly navigating virtual space. Half-engaged in a stream of weightless graphics and information, it’s easy to lose track of the screen’s physical parameters—and your own. Shirreff’s motivation for developing Shadow, Glare, however, stems from those moments when the screen’s material presence becomes impossible to ignore, when dust accumulations, errant smudges, and the movement of shadows and glares disturb the illusion of transparency. "In my living room the light will shift," Shirreff explains, "and suddenly I’ll be looking at all the dust on my computer screen, or the splotches of light. That will really jar me back into my chair."

Shadow, Glare explores such experiential disruptions through a subtle visual intervention: Without altering the computer’s normal operations, the program renders a morphing series of translucent forms that seem to float between the screen’s real surface and the immaterial desktop. This simulation can blend unobtrusively with any actual shadows that happen to be cast on the screen; users may continue to work or browse while only peripherally aware that the program is running. But the slowly evolving forms can also occlude the desktop and interrupt the user’s focus. To Shirreff, these subtle shifts in attention characterize the experience of working at a computer: "Time evaporates, and while at points I’m engaged, for the most part I’m folded into the experience, while somehow still scanning its surface." Unlike an object in an art gallery designed for close observation, Shadow, Glare operates between the multiple levels of awareness encouraged by a computer interface. 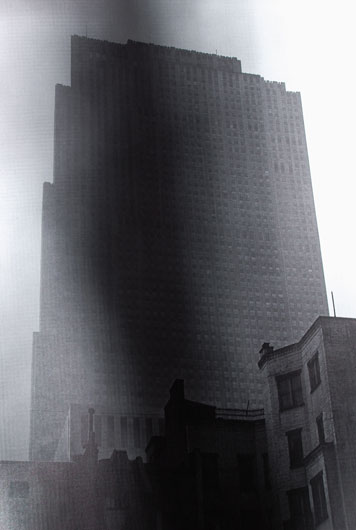 Although Shadow, Glare is the first work Shirreff has designed for a digital environment, it extends a line of inquiry that is fundamental to her practice. Shirreff develops what she calls "hybrid scenarios" that explore how two-dimensional media like photography and video shape our encounter with sculptures and architecture. At The Medium Was Tedium, a panel discussion organized by Triple Canopy and held at the New Museum in February, Shirreff described her interest in foregrounding the reflective surfaces of glossy photographs and the grainy resolution of video screens. Like the dust that covers a computer screen, these material qualities often have to be overlooked for representational images to appear coherent. Approaching the computer screen as one such hybrid scenario, Shadow, Glare brings into focus the complex negotiation between real and virtual space that we enter into, often unthinkingly, every time the screen lights up.