“Nonetheless, let us listen to the evidence. We hear two voices alternately reading a series of numbered theses. It is difficult to distinguish the voices. Indeed, as they explain, they are not individual but ‘dividual.’ They insist ‘the self has no core but is an experience of division, of splitting.’”

The New York Declaration: INS Statement on Inauthenticity, announced by the International Necronautical Society (INS) for September 25, 2007, supposedly took place on that date at the Drawing Center in Manhattan. I was not there and could not have been. Not because I was somewhere else (although I was somewhere else), but because it never happened. Despite the insistence of people who say they attended the event, and despite the ingenuity of INS Department of Propaganda, the evidence, properly examined, contradicts them. But, were it actually to have taken place, The New York Declaration would have gone something like this: 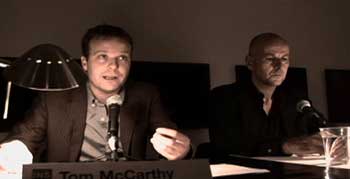 INS founder Tom McCarthy and the organization’s chief philosopher, Simon Critchley, share a table at the front of a long, high hall set up with folding chairs in rows. The walls are covered with INS banners and with sketches, hundreds of them, tacked or taped up in exfoliating layers. These rattle violently like dry leaves in the wind each time the heavy leather-covered doors swing open to admit another member to the growing audience. Eventually, some sketches swing from one thumbtack; others fold over themselves with a crackle; one detaches from the wall entirely and lies rolled up in the left aisle, softly rocking; nobody moves it. People step delicately over it until the folding chairs are filled to capacity, and an expectant hush descends. Security staff hover in the background. The only light seems to be from the speakers’ desk lamps. At last, Critchley and McCarthy, or actors closely resembling them, read a prepared speech on inauthenticity; it is the latest in a series of manifestos, statements, reports, and proclamations issued by the International Necronautical Society.

The first test of authenticity is origin. The INS originated in 1999 in London, when the then-thirty-year-old novelist Tom McCarthy sat in a booth at what was billed as an “articultural fair,” passing out a manifesto for a fictitious art movement. McCarthy assumed the position of general secretary and named the First Committee of the INS (later purged, then replaced by new personnel). Art Monthly described the new organization as “replaying the avant-garde along the faultline of death”; indeed, the necronauts’ First Manifesto declared, “Death is a type of space, which we intend to map, enter, colonise and, eventually, inhabit.”

This dubious claim did not fail to spread confusion, along with suspicions of necrophilia, thus warming the welcome the organization received from the London art world. As invitations were extended by respected institutions, the INS developed its public program of lectures, hearings, and broadcasts, as well as an elaborate internal apparatus of committees and subcommittees, agents, sleepers, and moles. A series of projects was devised to mobilize a key set of literary and philosophical concepts for the exploration of death. As the necronauts advertise whenever possible, Maurice Blanchot’s concepts were pivotal for explicating death as a space beyond the human and underlying all representation, a space that necronauts cruise in whatever vehicles they can.

The general secretary’s first report to the INS, Calling All Agents (2003), outlined the theory and structure of the future INS Broadcasting Unit. The report analyzed the findings of the Second First Committee Hearings (London, 2002), in which artists, writers, and researchers, selected for their knowledge of or experience with radio, were lined up for interrogation by McCarthy, accompanied by INS chief of propaganda Anthony Auerbach and external assessor Zinovy Zinik. In the report, McCarthy developed the themes of encoding, encryption, entombment, transmission, subjectivity, and death. He proposed Jean Cocteau’s film Orphée as a necronautical model: Orphée must transcribe cryptic transmissions from the dead poet Cégeste picked up on his car radio between stations.

In the INS Transmission Room, installed at London’s Institute of Contemporary Arts in 2004, multiple streams of voice, text, and data were received, transcribed, and processed by the INS Communications and Encodings Subcommittee. Devices shamelessly plundered from classical prosody and William Burroughs’s closet were deployed. The resulting scripts, cut up and hastily pasted together, were hardly original but were nonetheless authorized for broadcast, read over the radio, and retransmitted all over the world.

An earlier project was the reconstruction or reenactment of a death scene: an assassination attempt on a Mafia boss in Amsterdam that was thwarted when his bodyguard threw himself into the path of the bullets. From an eyewitness account, the INS painstakingly reconstructed the movements of the witness, as well as those of the combatants, and reenacted them at the original site, again on a Muybridge grid, and again in a wind tunnel. 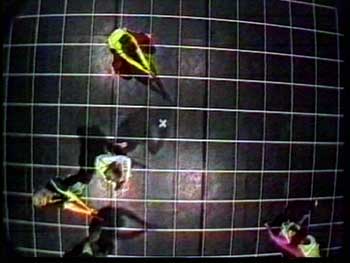 That was in 2001. McCarthy had recently finished his first novel, Remainder, though it lacked a publisher until 2005. (Its first was Metronome, a Paris-based art-publishing enterprise that itself reenacted Olympia Press.) Remainder tells the story of a man who, following an accident about which we are told nothing, receives an amazing amount of money in a legal settlement. The protagonist then devotes himself to meticulous, progressively more elaborate, and eventually fatal reconstructions and reenactments of scenes that he thinks he remembers, that he has happened to see, or that he has somehow heard about.

Now, it seems probable that The New York Declaration was also some kind of reenactment—I never said it was a hoax—and, consequently, my having been present would not lend my report authenticity. The Declaration was (supposedly) read from a prepared script and thus, like all reading, reenacted a text. But I am obliged to suspect more. The INS has so far refused to release the script and has promised only an “official transcript” at some future date; however, I’ve been able to obtain a print-out of an “Authorised” “Official Document” that the INS has refused to authorize. Meanwhile, the INS has warned that “unauthorised audio recordings circulating on the Internet” cannot be authenticated. These “pirate tapes” are of varying quality but are nonetheless consistent. Whether or not the INS Department of Propaganda was involved in the tapes’ circulation, we must entertain the possibility that the actors hired to deliver the Declaration were in fact lip-syncing to a recording. The evocative photographs published by the INS don’t settle the matter: While they appear to be video stills, no link exists between these images and the sound. Moreover, the “stills” are all close-ups that could have been taken anywhere, dispensing with the need for a fake audience. 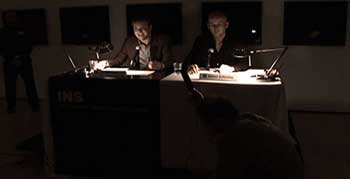 Nonetheless, let us listen to the evidence. We hear two voices alternately reading a series of numbered theses. It is difficult to distinguish the voices. Indeed, as they explain, they are not individual but “dividual.” They insist “the self has no core but is an experience of division, of splitting.” The promise of mastery over one’s own self is a delusion, a last-ditch attempt to counter “the experience of failed transcendence, a failure that is at the core of the general secretary’s [McCarthy’s] novels and the chief philosopher’s [Critchley’s] tomes.” The voices elucidate this experience in terms of the opposition between form and matter: Classically, matter is imperfection, which form must transcend through a conceptual or spiritual striving. For necronauts, in contrast, it is matter that matters most: “What is most real for us is not form, or God, but matter, the brute materiality of the external world. We celebrate the imperfection of matter and somatize that imperfection on a daily basis.”

How is this done? By admitting that art and literature are material productions—or rather, reproductions. Art is traditionally praised as a process of giving form, but instead it is a necessarily inadequate attempt to reproduce in matter the artist’s concept. So inauthenticity is intrinsically bound up with art, which is “a repetitive mechanism that functions through theft, forgery, copying, and embedding.” According to the Declaration, there are two ways of reading art’s repetitive aspect. First, “art attempts to extinguish matter and achieve authenticity as a hypnotic, monotonous, endless recurrence of repetition. This produces the trancelike stasis and intense psychic tingling that we sometimes think of as aesthetic pleasure. At times, it almost feels real. Then again, so can masturbation.” Thus, the Declaration’s second reading of repetition: “Art’s dirty secret is inauthenticity all the way down, a series of repetitions and reenactments that attempt to cover over the traumatic event of materiality.”

The INS is on the side of comedy, not tragedy. For, if art is a “repetitive mechanism,” we are reminded that the repetitive and the mechanical are also at the heart of Bergson’s theory of comedy—think of Wile E. Coyote, whose many deaths are not noble or meaningful, merely hilarious. The tragic hero meets the inevitability of matter with an acceptance that turns his death into an affirmation of self. He claims his own unique and excellent death and, with it, meaning. The comic hero, in contrast, dies badly: Wile E. Coyote’s deaths are neither chosen nor accepted with grace. He dies repeatedly: His is not the single luminous moment of a tragic death affirming the transcendence of self over matter. Rather, he endures a multiplicity of moments that continually undo the self, undoing as well that supposedly ultimate undoing, the fetishized death. And why is this funny? Because “humor is the highest expression of the principle of dividuation, of an ever-divided self-relation, of our essential lack of self-coincidence.” This lack is the fundamental trauma that gives rise to the repetition compulsion of Wile E. Coyote—and of art. Art may attempt to hide “the traumatic event of materiality,” but there is always “a remainder that remains: a shard, a leftover, a trace, a residual.” That remainder is the mark of inauthenticity. This The New York Declaration declares.

In the report that determined the design of the INS Transmission Room, McCarthy quoted Auden’s dictum that “poetry makes nothing happen,” calling it “an active construct in which ‘nothing’ designates an event, perhaps even a momentous one.” It appears that The New York Declaration was such an event, nothing if not momentous. 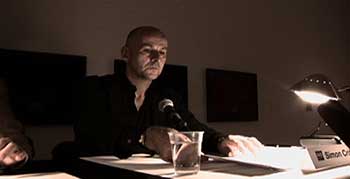 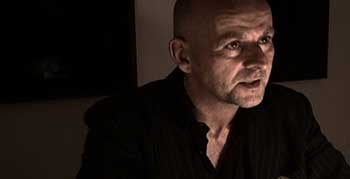 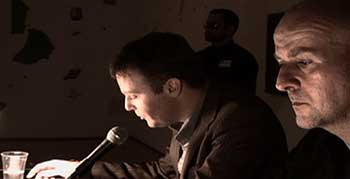 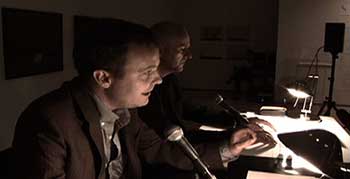 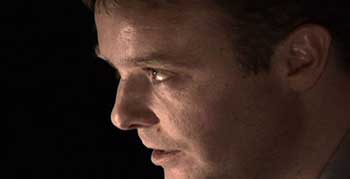 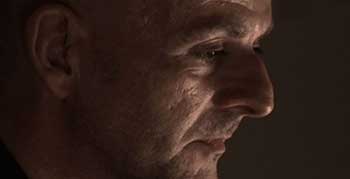 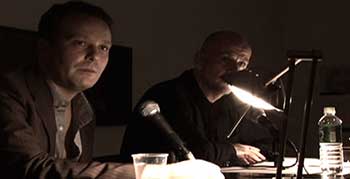 Crafted images provided by the INS Department of Propaganda purport to be video stills from the event held at the Drawing Center, New York, on September 25, 2007. Exploiting both the poor resolution and the coded indexicality of such stills, the pictures appear to be convincing documents placing McCarthy and Critchley at the scene. However, closer examination reveals a complete lack of any contextual detail. Moreover, the resemblance of the look-alike actors to the supposed protagonists is mainly a result of costume and lighting. Compare with photos of McCarthy and Critchley taken elsewhere. 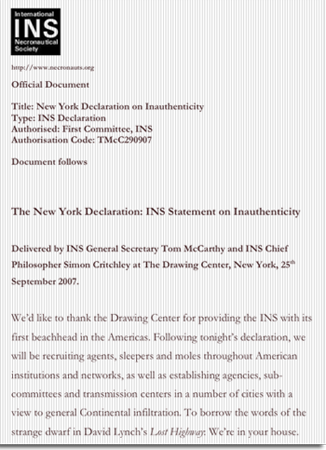