New American landscapes: varieties of blight, idylls of desolation, the lifespan of decay.

Detroit and New Orleans are separated by roughly one thousand miles, yet in many ways they occupy the same space. The collapse of Detroit has exposed the boom-bust breakdown of the innumerable American cities on the front lines of racial segregation and mass deindustrialization. Meanwhile, Hurricane Katrina turned New Orleans into the poster child for the toxic relationship between crisis and capitalism. First the city was at the mercy of private military contractors and the government’s inept emergency-response apparatus, then the predacious agents of redevelopment. Both places are rife with scenes of urban desolation: foreclosed homes, abandoned blocks, shuttered factories, graffiti-bombed schools, fenced-off warehouses, deserted infrastructure; haunted spaces that blur the remains of natural and economic catastrophe.
This landscape has, in turn, been made into a spectacle of ruin, feeding an infatuation with our own destruction. It can be seen in the imaginary geographies of sensationalized docudramas, action-film backdrops, video-game worlds, and magazine pictorials, where the optics of ruin are harnessed to produce phantasmagorias of the End Times. But behind the veil of pop culture, the image of these places reveals a more pertinent threat: the degradation of state power and the heightened role of sovereign corporations in the production of space. Government failure has a way of obscuring complicity: Detroit and New Orleans are blueprints for the manufacture of ruin, a result of politics being held hostage by the accumulation of corporate power, whether in the form of the auto industry or that of the barons of “reconstruction.” 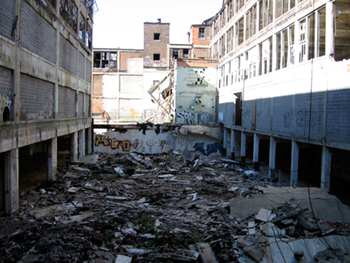 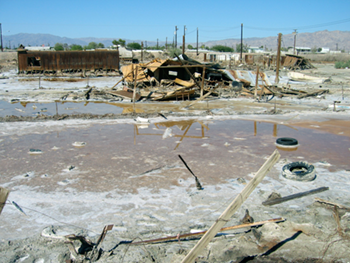 Despite the rhetoric of late capitalism, the world has not come together under a single marketplace. Rather, we have witnessed the implementation of what Pierre Bourdieu called “a programme of the methodical destruction of collectives” designed to “protect foreign corporations and their investments from national states.” The wreckage of Detroit is a footprint of the ascendance of this "neoliberal utopia." The aftermath of New Orleans presents another aspect of this phenomenon; the city’s crisis has been treated not as an opportunity to rebuild the public sphere but as a chance to secure the reconstructive domain of “disaster capitalism"—Naomi Klein’s epithet for the half-century-old corporate financial order that preys on crises and exploits lacunae of state power.
Detroit’s devolution stretches back to the 1950s, when the production of cars and bombers, a constellation of new highways, and a dose of nuclear paranoia encouraged the middle class to flee for the suburbs; by the 1960s, the center of the city was left a warren of ghettos populated by jobless African Americans. In 1967, with joblessness climbing and racism rampant, the city exploded into twelve days of riots—the punctuation of an era of prosperity and the beginning of terminal urban neglect. New Orleans was thrust into devastation over the course of a few days, its ruinous trajectory an inversion of Detroit’s languorous decline into industrial rigor mortis. But today, they are both kept in ruin (if only through resolute neglect), to the benefit of those who hold stakes in crisis management, urban redevelopment, and the ever-growing security-industrial complex, all of which require constant instability in order to justify their services.
Detroit: City on the Move (1965). Modern New Orleans (1940).
Ruin porn is a war on memory, dislocating the political dynamics of ruin in favor of momentary sensations and lurid plots. The state of ruin is seen as exactly that: a condition rather than a continually unfolding process. In fact, ruins evolve over time; they are the result of construction as much as of destruction; they are forms that fluctuate as other processes transform the landscape. Decay is, in this sense, a political morphology, a timepiece for decoding the narratives of social failure, disentangling the relationship between initial crises and the “second crisis” of political fallout, gauging institutional rot. But architects and filmmakers, journalists and television producers, religious zealots and conspiracy theorists, novelists and video-game developers have all become mesmerized by the grandeur of ruins, submitting themselves to a state of aesthetic arrest; the apocalyptic image reigns supreme.
That image has birthed an entire industry. Hollywood crews are beckoned to Detroit by state subsidies covering up to 42 percent of production costs, while scores of journalists flock to the city for the endless photo ops of tarnished monuments to Detroit’s former glory. “There’s a total gold-rush mentality” in Detroit these days, one reporter has observed. Even Time magazine has joined the fun, spending a hundred thousand dollars to buy a century-old house on Parker Avenue in the West Village neighborhood. Time’s local bureau now churns out reports on and pictures of the calamity daily. (The irony of “Time Inc.” being stamped on each image is not lost here.) The photographs inevitably showcase prime examples of abandonment at an unfathomable scale, set off by close-ups of derelict classrooms or offices, the chairs upturned and the desks caked in dust. The effect is a burial rehearsed with each portfolio.

When Roosevelt anointed Detroit the “arsenal of democracy” in a 1940 fireside chat, he ushered in a new era of the military-industrial complex, aligning private industry and the Pentagon to foster a war-based economy indistinguishable from its civilian counterpart (and turning a blind eye to workforce discrimination). But in the 1970s and ’80s the companies suffered devastating setbacks from oil shortages, rising fuel prices, and competition from German and Japanese markets. They eventually migrated much of their operations to more favorable environs, mostly Mexico and Canada. Thanks to new automated technologies and cheaper labor costs elsewhere, Detroit was left with a useless war machine and hundreds of thousands of workers who had never done anything but make missiles and cars.
The abandoned houses and plants that now stretch from Detroit to Flint and the greater Rust Belt are decidedly different from the carnage wrought by Hurricane Katrina, which differs entirely from the lingering void where the World Trade Center towers once stood. Yet these ruins are all artifacts of political decadence. The thousands of foreclosed homes littering the suburbs of Florida and Nevada mark a brand of desolation distinct from the corporate logos of the half-built megatowers looming over Doha and Dubai and from the disused maquiladoras dotting the Mexican border, yet their facades suggest a common financial lineage.
Newsreel of Detroit missile factory (1959). "Dubai turned out to be an exception": celebrating Palm Jumeirah Island.
In his book Subnature, the architectural historian David Gissen provides an etymological history of debris as it pertains to our perception of ruins. In eighteenth-century France, “authors often used the word débris to describe the scattered and atomized remains of structures that had been leveled by cataclysmic events such as war or natural disasters.” The emergence of the word coincided with the popularization of gunpowder and the consequent scarring of buildings with artillery, which in turn prompted “an increase in the archaeological documentation of tiny fragments of destroyed structures.” The study of debris “takes in the total spatial transformation wrought by violence and disaster, and it speaks of the ways that destroyed structures transform their surroundings.”
Debris and other “subnatural” elements, such as puddles and dust, have always been essential to architecture, Gissen tells us, but their role has been overshadowed by the emphasis on the effervescent qualities of light and wind. He suggests that shifting the emphasis toward debris and its ilk could produce a new understanding of the relationship between architecture and nature. These concepts have been cast out of the discourse because their connotations of filth and impurity are in opposition to the classical domain of architecture: the production of immaculate, almost supernatural spaces. 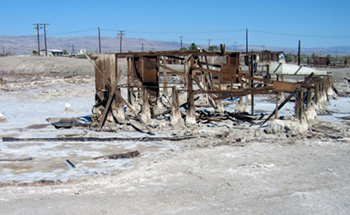 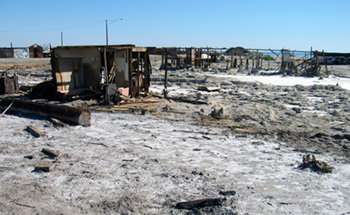 After WWII, European and Japanese architects were compelled to deal with debris as a material. In the work of the New Brutalists in Britain, “debris became a type of authentic nature,” one that accurately represented life in cities recovering from the war, in contrast with the “green parkways and fieldscapes of other postwar architects and planners,” Gissen writes. They built housing projects that integrated the bits and pieces of demolished houses that had previously stood on the site. This was a new kind of nature produced by humans, a “subnatural environment born from violence.”

Just as dust and debris are constitutive elements of architecture, corruption, closed-door lobbying, voodoo economics, patronage, and power vacuums are unseen forces in the production of space.

There are architectural structures that arise from these political subnatures. They shape spaces accordingly, to accommodate the deregulation of capital, for instance, or the shielding of torture from public scrutiny, racial discrimination, the suspension of the rule of law, or the criminalization of communities in service of private-prison expansion. If Dubai represents the ruins of a not so distant future, and Detroit those of the not so distant past, perhaps the current political economy is best glimpsed in those buildings that stand somewhere between: private prisons, migration-detention facilities, sweatshops, gated communities, global financial institutions. These spaces should not just be captured on camera but indexed and employed to better understand how the destructive processes of late capitalism are manifest in the built environment.

The geographer Neil Smith has described the remaking of New Orleans as “gentrification, militarization, and capital accumulation” coming together “to reconstruct a social geography without many of the working-class poor who had been ghettoized there in the past.” Public schools have been privatized, with the profits flowing to some of the same contractors who are increasingly responsible for—and the beneficiaries of—our wars in Iraq and Afghanistan. American infrastructure is being sold to foreign companies because this country can no longer afford the maintenance costs. In a permanent-war economy, the profiteers are those who have the most direct investment in the production of ruins, because they are the ones who will be contracted to reconstruct them.
For much of human history, ruins were a trophy of conquest, symbols of one civilization being subsumed by another. Dresden and Nagaski came to represent our military victory over the Axis powers, and the images of those razed cities have been used as a form of deterrence ever since. (Hitler’s architect, Albert Speer, designed buildings that would look especially beautiful in a state of decay; his “Law of Ruin Value” asserted that such buildings were superior because their iconography would persist even after their destruction.) These images, too, are the spatial products of ruin, with the husks of buildings and the charred remains of homes cast as measures of the success of reducing the city to a target. Ruin, or the threat of ruin, becomes its own kind of weapon. The rubble-strewn blocks of Gaza convey this well-worn promise of annihilation.

The derelict civic structures of Detroit speak to the impermanence of our achievements and register the limits of our aspirations. But this is nothing new. Percy Bysshe Shelley’s 1818 poem “Ozymandias” observes much the same of an ancient statue commissioned by Ramesses the Great (Ozymandias), and bearing the inscription, “My name is Ozymandias, king of kings: Look on my works, ye Mighty, and despair!”
Nothing beside remains. Round the decay
Of that colossal wreck, boundless and bare,
The lone and level sands stretch far away.
The ruins scarring the American landscape carry with them another, more mundane warning: that of the usurpation of state power for corporate gain. In The History of the Decline and Fall of the Roman Empire, Edward Gibbon describes this deeper process of ruination:
The decline of Rome was the natural and inevitable effect of immoderate greatness. Prosperity ripened the principles of decay, the causes of destruction multiplied with the extent of conquest, and as soon as time or accident had removed the artificial supports, the stupendous fabric yielded to the pressure of its own weight.