For translucence, against transparency: an account of conceptual art and its mediums. Presented during Triple Canopy’s panel discussion The Medium Was Tedium, held at the New Museum on February 19, 2010, and hosted by Rhizome.

AS AN ARTIST, I HAVE NEVER had an allegiance to any specific medium. In the 1960s, so-called medium-specific art prescribed the limits of what was permissible to express. This was the “repressive face of modernism.” My desire was to find a way to expand the range of philosophical, psychological, political, and visual ideas that my work could engage. New ideas evolved into new mediums. But these new mediums did not arise as mere acts of will. First, they were always contextual, based in actual situations and immediate needs. Second, they were oppositional, intended as an attack on the dominant aesthetic and critical hierarchy.

For me, the medium was never transparent, never something to be seen through, never a neutral delivery system. No matter how reduced the means, they always remained something material, something to be taken apart and put back together, something to be confronted. Any genuine critique can arise only out of the process of using the medium against itself. Far from being the “tedium” of this evening’s theme, this is how I see my job as an artist: to grapple with the means of expression until an idea finds its own form.

Mel Bochner and Robert Smithson, “The Domain of the Great Bear,” Art Voices (Fall 1966). Click each thumb to enlarge. Next two pages: Views of Working Drawings and Other Visible Things on Paper Not Necessarily Meant to Be Viewed as Art, 1966.

“The Domain of the Great Bear” was the first magazine-intervention piece, written in collaboration with Robert Smithson, and published in the Fall 1966 issue of the now long-defunct magazine Art Voices. One day Smithson and I were bitching about how impossible it was to get dealers to come to our studios. They all said the same thing: “Just send me some slides of your work.” We started speculating that if slides were all anyone wanted to see, and since they were already a form of reproduction, was there any need to make actual works? In other words, why bother with production when you could go directly to reproduction? Also, wouldn’t this go a long way toward subverting the marketing system that held artists in its iron grip?

Why not camouflage the work as a magazine article, then surreptitiously slip it into the media stream? Without ever having been an original, the reproduction would become the work of art. By co-opting the art magazine as our vehicle, we would completely bypass the galleries, transforming a secondary source into a primary medium. We realized, however, that the magazine had to be an unknowing partner, because if attention were drawn to our project as an “artwork,” in quotation marks, its subversiveness would be compromised. For a number of reasons, we chose the Hayden Planetarium as our ostensible subject, but primarily because it provided the perfect decoy, deflecting attention away from our real purpose—to plant an intellectual time bomb inside the art system’s machinery.

“Working Drawings and Other Visible Things on Paper Not Necessarily Meant to Be Viewed as Art” has received a good deal of critical attention, so there is no reason to say much about it. Only that it, too, was a response to a specific set of circumstances.

The director of the School of Visual Arts’ gallery had invited me to curate a drawing show. When she saw the drawings I’d selected she was horrified and refused to spend the money to have them framed. Fortunately, as an instructor in the art-history department I had unlimited access to what was then the latest wonder of technology, the Xerox machine. Everything else flowed from that fact.

But a couple of years ago, a Japanese critic called, wanting to interview me. “Don’t worry,” he said, “I won’t take up much of your time. I have only one question: ‘What would conceptual art have been if the director of the gallery had had the money to frame those drawings?’”
The most famous issue of Aspen magazine was the “white box,” conceived and edited by Brian O’Doherty. My contribution was the piece Seven Translucent Tiers. The work consists of a paper portfolio with seven sheets of tracing paper inside. On the cover of the portfolio is the diagram of a seven-by-seven grid. Around the border is printed:

A morpheme is a unit of a language that cannot be further divided and that bears a functional relationship in a linguistic system, which I had come to believe all art was. In keeping with the seriality of my work at that moment, this was an attempt to see how far I could go in making language substitute for mass in a sculpture. Instead of stacking blocks, the work was constructed by stacking the sheets of paper one on top of another until the pluses and minuses equaled the numbers on the diagram. It was sculpture reduced to the thickness of seven sheets of tracing paper, or roughly one thirty-second of an inch. As Lewis Carroll put it in Alice’s Adventures in Wonderland, I was searching for “a grin without a cat.” 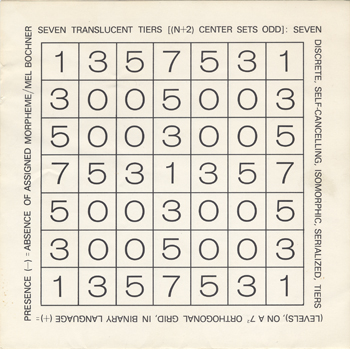 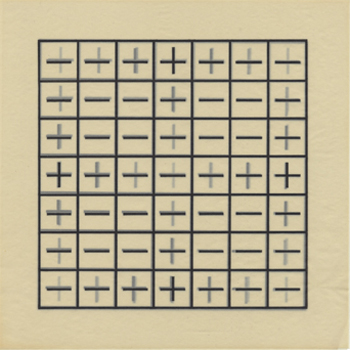 A received idea of the time was the notion that a minimal-art work could be ordered over the telephone. When asked about this, Barnett Newman reportedly replied, “Those guys must really be geniuses, because I can’t even get a sandwich made the way I want it when I call an order in to the corner deli.” In any case, in 1968, the Chicago Museum of Contemporary Art organized an exhibition titled “Art by Telephone,” inviting a group of artists to phone in an artwork. Rather than doing that, I decided to use the telephone as a tool with which to play a conceptual version of the old childhood game of “telephone.” The project began with me telephoning someone in France and reading him a paragraph from the text “The Last Word in Graphic Art” by John Chandler, which, parenthetically, was the first piece of criticism written about my work. The French person wrote the text down in English and then translated it into French. He then called someone in Italy and read the text to him in French. The Italian wrote it down in French and translated it into Italian. He then called someone in Germany and read it to him in Italian. The German wrote it down in Italian, translated it into German, and called someone in Sweden.

The same process was repeated from German to Swedish, and Swedish back to English. The last translation from the Swedish was then telephoned to me. I wrote it down and sent the final version to the exhibition. The presentation of the work consists of the original text hung on the wall next to the five-times retranslated text.

“The Beach Boys—‘100%’” was meant as a parody of the inanity of the art criticism of that time. While I was actually very interested in Brian Wilson and his way of collaging together dissonant sounds into highly manneristic compositions, this text was, again, only ostensibly about the Beach Boys. It contains not one word written by me. It is literally a pasteup, what today would be called a remix, of clippings from Beach Boys press releases, interviews, and fanzine puff pieces. The irony of this work, the way it could fold so easily into the context of a serious art magazine, the way it read like the breathless art-critical hype of the time (I’m not sure anything has changed), was pretty much missed by everyone. My own favorite moment is the list in the center column. I consider it my first “measurement piece.”

In 1967, I started compiling a group of quotations about photography. I wanted to break down the notion that photography equaled truth. This, of course, was three decades before digital photography made that argument moot. When I had about twenty-five to thirty quotes, I submitted them under the title “Dead Ends and Vicious Circles” to Artforum for publication. The editor said, “This isn’t a goddamn photo magazine. This is an art magazine! Take it to Popular Photography.” But Popular Photography didn’t want it, either. Then, in 1970, Multiples Gallery invited me to participate in the publication of the boxed edition called “Artists and Photographs.” For my contribution, I picked six quotations from the earlier group that taken together might (or might not) suggest the impossibility of a “theory” of photography. To these I added three fake quotes. To this day, I have never revealed which are which. Under the principle “One rotten apple spoils the barrel,” the intention of this act of forgery was to undermine any possibility of belief in the text. The “groundlessness” of the quotations became the equivalent of what I viewed as the groundlessness of photography itself, focusing attention on the artificiality of any framing device. I saw this as an attack on one of the main tenets of minimalism, Frank Stella’s claim that “what you see is what you see.”

The tenth “misunderstanding” is a negative reproduction of the original Polaroid photograph of my 1968 piece Actual Size: Hand. This is also a fake, because every Polaroid (at least in 1968) was a positive print. There were no negatives. The use of handwriting printed in facsimile further confused the distinction between the handmade and the mechanical reproduction. And since there was no narrative, the unbound, envelope format subverted any implication of a beginning, a middle, and an end.

The last piece I want to show you is Language Is Not Transparent. This was first exhibited in the final Dwan Gallery “Language” show in 1970. By then conceptual art had already passed its apogee and had settled into the set of tropes that continue to be recirculated to this day. Written on a blackboard painted on the wall, in a crude hand, the text is a critique of the new paradigm that considered language as providing direct access to the artist’s thoughts, unmindful of language’s pitfall, its deceptions and delusions, its hidden agendas, its covert political subtexts. All abuses of power begin with the abuse of language. The drips at the bottom are meant to represent the never-to-be-completed work of this critique.

Which is to say that all earlier models, including one’s own, must be relentlessly questioned and eventually discarded.