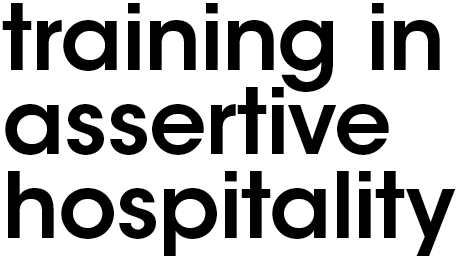 WAL-MART DESCRIBES ITS PEOPLE GREETERS as “part host (‘Welcome to Wal-Mart’), part psychologist (‘If you were my husband, would you wear this?’), and part traffic cop (‘Where’s the bathroom?’).” Usually elderly employees, Greeters stand stationed at a store’s entrance, mustering a smile for each new customer. Like all of Wal-Mart’s “associates,” they participate in the semi-spontaneous outbursts of the company’s official cheer (“Whose Wal-Mart is it? It’s my Wal-Mart!”), and adhere to a pledge prescribed by its founder, Sam Walton (“I promise that whenever I come within ten feet of a customer, I will look him in the eye, greet him, and ask if I can help him”). In summer 2000, Daniel Bozhkov enrolled in Wal-Mart’s “assertive hospitality” training course and worked as a Greeter at a store in Skowhegan, Maine. He had become interested in the position after watching a German-television program that focused on the Greeters and their distinctly American occupation of being paid to say hello.

On the back of Bozhkov’s standard-issue blue vest read another of Wal-Mart’s slogans, OUR PEOPLE MAKE THE DIFFERENCE—a curious statement considering the company’s notorious history of battling unionization and paying low wages. Wal-Mart’s numerous critics would call it outright hypocrisy, but Bozhkov’s investigation entertained a second possibility: that Wal-Mart persists—even thrives—in a state of self-contradiction. The company can stake its sales model on its workforce while keeping full-time employees below the poverty line. It can mandate the personal touch of small-town stores while driving actual small-town stores out of business. It can resist outside demands to improve its record on social justice yet outpace FEMA in delivering supplies to Hurricane Katrina victims. Bozhkov didn’t enroll as a Greeter in order to provide further ammunition to Wal-Mart’s already numerous critics. Rather, he aimed to remove all critical distance, to become part of the problem. Welcoming guests at Wal-Mart’s threshold, he engaged directly with the idiosyncrasies of a multi-national conglomerate that is now the U.S.’s largest private employer and whose stores comprise a considerable portion of its public sphere.

By most definitions, turning a job at Wal-Mart into an artwork would fall squarely into the category of “post-studio” practice. Yet Bozhkov anchored the project in one of art’s most traditional forms: fresco painting. (That same summer, Bozhkov was teaching fresco at a nearby artist-residency program.) With the approval of the store’s manager, Bozhkov devoted his time between shifts to painting a wall in the Layaway Department, where customers could store items being paid for in installments. The fresco depicted a landscape variously populated by local Skowhegan buildings, Wal-Mart merchandise, and members of the artist’s family—all in a palette designed to match the company’s color scheme of gray and dark blue. This combination of traditional artisanship and consumer goods brought to mind both the church frescoes of Giotto or Piero della Francesca and the stock photography of sales catalogs.

In fresco, water-based pigment is sealed into wet plaster, so that the painting literally becomes part of the wall. Thus, Bozhkov’s design was embedded into the very structure of Skowhegan’s Wal-Mart. The following dossier documents the fresco’s changing relationship to its site over the course of four years. Situated in the densely packed Layaway Department, the fresco was oftentimes blocked—or, from another perspective, enhanced—by constantly changing arrangements of merchandise. The frequent shuffling of bulky, sharp-edged items like refrigerators and air conditioners scratched and scuffed the fresco’s surface considerably—resulting in the sort of deterioration usually associated with centuries-old artworks. In 2003, Bozhkov showed the fresco to an Italian conservator, Renato Giangualano (who had just completed work on Tiepolo’s frescoes in the Basilica dei Santi Faustino e Giovita in Brescia), and asked him for a restoration evaluation. Giangualano called the damage marks "abrasions" and recommended that they be preserved. Bozhkov took the advice, realizing that it had deep implications. Accepting the abrasions as permanent meant that the fresco wasn’t yet finished. Rather, it was a work in progress, changing and developing on its top sixteenth of an inch, where the space of painting came up against the everyday operations of the world’s largest retailer.

In 2004, Wal-Mart implemented a nationwide change in color scheme, to soft peach and tan. Bozhkov’s fresco no longer blended into Wal-Mart’s overall corporate identity and had to be removed. The plaster was extracted and is now shown in gallery settings. The wall that was once home to Bozhkov’s painting is now covered by two undifferentiated fields of Wal-Mart’s new colors—no longer a fresco, but perhaps a pair of monochromes.


Above: Bozhkov working as a People Greeter and painting a fresco at the Wal-Mart in Skowhegan, Maine.
Next page: Documentation of the fresco's changing surroundings in the Layaway Department. Click on the image to begin the slide show.