In September 2012, on the occasion of its presentation at Art Berlin Contemporary, Triple Canopy published three limited-edition posters that graphically represent the essay "International Art English," published by Triple Canopy in issue 16. The authors, Alix Rule and David Levine, argue that the internationalized art world relies on a unique language, whose purest articulation is found in the digital press release. They analyze a corpus of press releases circulated by e-flux in order to describe this language. They trace the particularities of International Art English to translations, from French and German, of critical texts published in the 1970s in journals like October. The widespread use of the Internet has, they argue, accelerated the development of IAE, turning it into a kind of lingua franca; the proliferation of international variations—French IAE, Scandinavian IAE, Chinese IAE—ends up diluting the authority of critics, "traditionally the elite innovators of IAE." The posters produced by Triple Canopy, and made available below, show sentence trees that illustrate some of IAE's curious lexical, grammatical, and stylistic features. 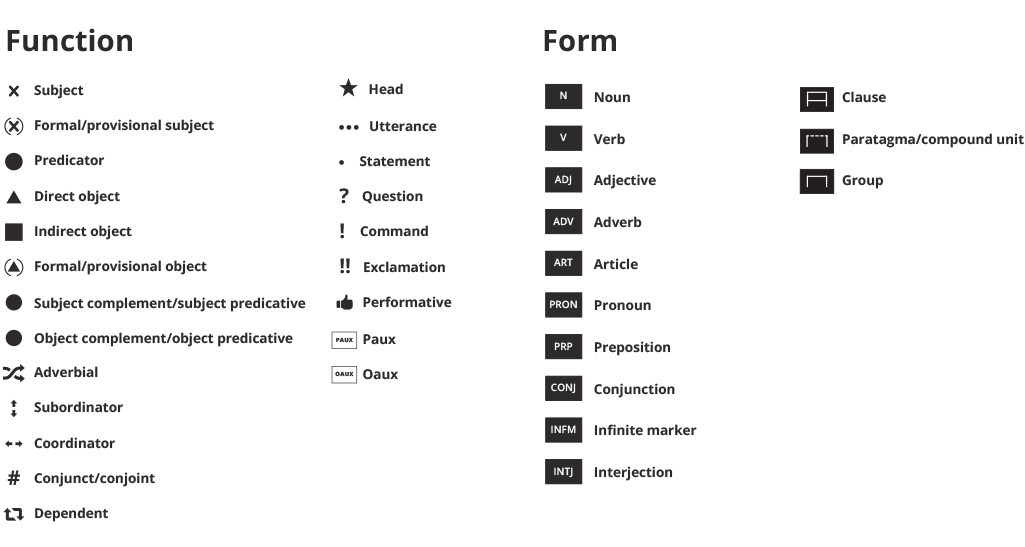 Key to the sentence trees.

About This Sentence Tree
IAE always recommends using more rather than fewer words. The principle of antieconomy accounts for the dependence on lists.

Context
"Between art and science forms of practice, techniques, formats and aesthetics have emerged which can be subsumed under the notion of the 'Curatorial'—not dissimilar to the functions of the concepts of the filmic or the literary. With activities such as organization, compilation, display, presentation, mediation or publication the curatorial encompasses a multitude of different, overlapping and heteroge- neously coded tasks and roles. Dealing with them the various participants within the field have developed a broad spectrum of historically, disciplinary, professionally and regionally shaped approaches."

About This Sentence Tree
Here we find some of IAE’s essential grammatical characteristics: the frequency of adverbial phrases such as “radically questioned” and double adverbial terms such as “playfully and subversively invert.” Note also the reliance on dependent clauses, one of the most distinctive features of art-related writing.

Context
"REDCAT is pleased to present the first solo exhibition in Los Angeles by Seoul-based artist Kim Beom. Through an expansive practice that spans drawing, sculpture, video, and artist books, Kim contemplates a world in which perception is radically questioned. His visual language is characterized by deadpan humor and absurdist propositions that playfully and subversively invert expectations. By suggesting that what you see may not be what you see, Kim reveals the tension between internal psychology and external reality, and relates observation and knowledge as states of mind."

About This Sentence Tree
Spatial and nonspatial space are interchangeable in IAE, and so many ordinary words take on nonspecific alien functions. Reality occurs four times more frequently in the e-flux corpus than in the British National Corpus (BNC).

Context
"The exhibition presents the work of artists who, by avoiding placing themselves in a position of competition with the predominance of the image and the transformation of reality into spectacle, opt for transversal paths, with works that infiltrate the folds of reality and bring to light its contradictions, revealing its weak points to suggest a different interpretation. In this sense the artist adopts strategies characterised by radical attitudes: secrecy, infiltration, parasitism, negation, excess. This sub real is thus formed of the leftovers of reality, where the value of experience is restated in a process of radicalisation and of excess, the image is negated, taken apart and short-circuited, the figure of the artist is concealed until it is no longer recognisable."