An event, part of Parts of Speech at MCA Chicago

With faith in public and private institutions at an all-time low, what kinds of speakers are likely to win trust, acquire authority, and mobilize audiences? How do we recognize ourselves in the routines of comedians, reports of journalists, appeals of activists, manifestos of tech entrepreneurs, and formulas of TED Talks? “Parts of Speech,” an exhibition on public speech organized by Triple Canopy and Public Fiction with the Museum of Contemporary Art Chicago, responds to these questions with a series of experimental lectures that are being delivered at sites of assembly throughout Chicago between January 22 and June 9. Steffani Jemison, Hari Kunzru, Tomeka Reid, Astra Taylor, Christopher Kulendran Thomas, and Julio Torres are freely interpreting the form of the lecture in order to address the use of language and media to mold opinion, forge intimacy, marshal authority, and orchestrate movements.

Meanwhile, the below artworks, chosen in response to the lectures, are on view at the Commons, the MCA’s space for art and civic engagement. Like the lectures, these video works—by Rami George, Liz Magic Laser, Nicole Miller, Rodney McMillian, the Videofreex, and David Levine (who will also present a commissioned performance)—are manifestations of public speech. They test the vocabularies and tactics that entice and persuade, or provoke and alienate, audiences. And they ask how the speakers and audiences that are typically excluded by cultural institutions and the news media might actually gain definition and force as a consequence.

“Parts of Speech” is being published by Triple Canopy as a series that will eventually include edited transcripts of the lectures and videos composed from the documentation. [Since the publication of this page, the online works adapted from the lectures have been published.] The series is one cornerstone of a forthcoming issue, Two Ears and One Mouth, that examines how we speak and listen and who has the right and capacity to be heard. (The other is the series Omniaudience, which considers the role of listening.) 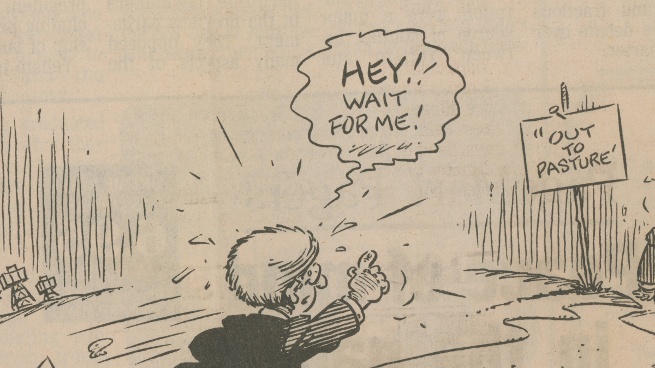 In Untitled (Saturday, October 16, 1993), Rami George highlights a newspaper article about his childhood: a controversial custody battle that involved his father retrieving him and his sister from a former jail that had been occupied by the Oklahoma-based cult the Samaritan Foundation. George’s video addresses the persuasiveness of cult leaders, the proliferation of ideas in print, and the significance of having a profound personal experience exposed to the public. 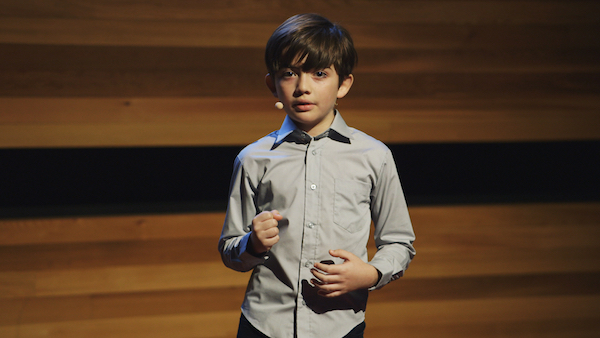 In The Thought Leader, Liz Magic Laser has a ten-year-old named Alex Ammerman use the TED Talks format while delivering a monologue adapted from Fyodor Dostoevsky’s Notes from the Underground (1864). TED Talks is a series of motivational speeches with the mission to promote “the power of ideas to change attitudes, lives, and, ultimately, the world.” Speakers typically propose idealistic solutions to contemporary issues but are often criticized for failing to offer tangible steps forward. Here, the unusual combination of the young speaker, the conventional format, and the philosophical content turns Dostoevsky’s attack on the ideal, popular during his lifetime, of enlightened self-interest into a broadside against the naive idealism on display in TED Talks. 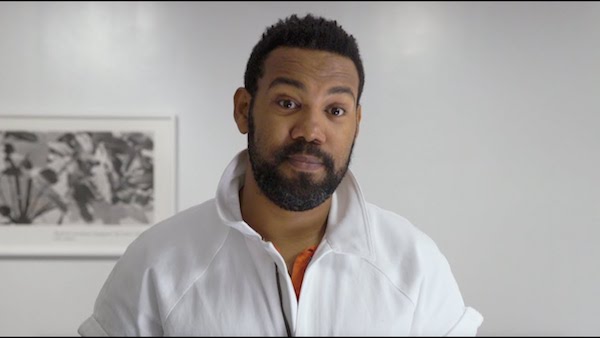 David Levine
Some of the People, All of the Time, 2018
Excerpt of performance documentation from the Brooklyn Museum, May 23, 2018
7 minutes
Courtesy of the artist and Brooklyn Museum

16-1546 Living Coral (GP01), 2019
Contracted performance by the artist with GetPeople
Courtesy of the artist and GetPeople

For the past several years, David Levine has been exploring how our sense of agency is threatened by the (alleged) presence of paid surrogates in the digital, political, and social realms. (Recall the use of fake crowds by Donald Trump during his candidacy, and the subsequent allegations by right-wing pundits that such actors were being employed to populate rallies.) Some of the People, All of the Time is a sharply edited documentary of Levine’s recent Brooklyn Museum exhibition, which reflects on paid protesters, hired audiences, Twitter bots, and other putatively deceptive manifestations of the masses that haunt democratic politics. In addition to the video on view, Levine presents a commissioned performance, 16-1546 Living Coral (GP01), on May 25, May 28, and June 1. Triple Canopy and Public Fiction have contracted Levine and his crowdsourcing agency, GetPeople, to populate the museum with made-to-order visitors. “Here at GetPeople, we understand it's not just about having spectators—it's about having the right spectators,” the agency states. “That's why we offer bespoke crowdcasting services for elite cultural institutions. These small-batch, artisanal crowds are cast in consultation with curatorial, marketing, and education teams to model ideal behaviors and responses to your exhibitions and events.” Besides viewing the exhibitions, the only job of the fake visitors wandering through the MCA is to convincingly, repeatedly execute a brief dialogue written by Levine. The dialogue reflects on the wall text accompanying the art and the uniform, depersonalized voice through which the institution speaks to the public. Museum visitors encountering the performers and overhearing the dialogue might be prompted to ask: “Are those people real?” 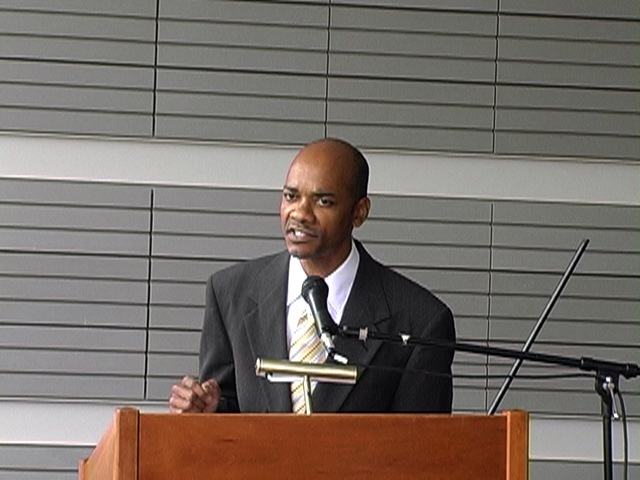 In Untitled (the Great Society) I, Rodney McMillian reenacts President Lyndon B. Johnson’s 1964 commencement speech at University of Michigan. His work stresses the importance of a speaker’s appearance in framing the content of a speech, and how the speaker’s intent can be upended by the manner of the performance. Channeling LBJ, McMillian addresses a new generation of voters and defines the “great society” as a revolution instigated by the government—and reveals the hollowness of the celebrated term, the gap between rhetoric and reality. McMillian’s work emphasizes that history and politics are shaped by performances of authenticity and command of appearances. 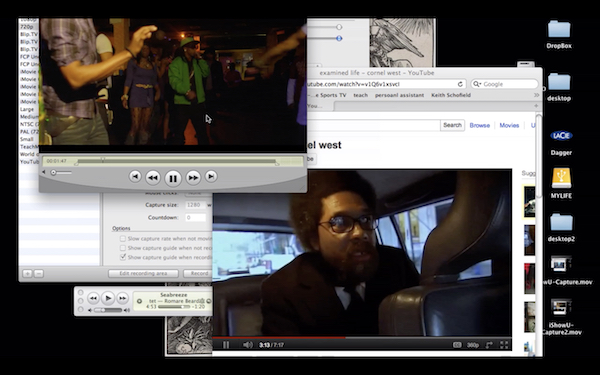 Inspired by the artist Romare Bearden’s intricate collages of African-American life, Nicole Miller’s video shows her toggling between the windows on her desktop, viewing the media that animate her work. The assembly of moving images reflects her approach to research, which is typically non-hierarchical. She compiles and superimposes clips pulled from the web and from films, including one from Astra Taylor’s Examined Life (2008): Dr. Cornel West, riffing on the on-screen collision of information, lends language to Miller’s method and resembles a flaneur navigating a city of data. Miller’s video describes how people understand and express themselves through the private consumption of media that circulate online. 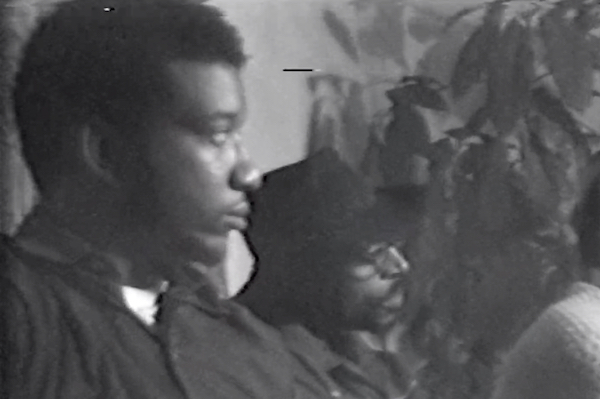 The Videofreex
Fred Hampton: Black Panthers in Chicago, 1969
Video (black and white, sound)
23 minutes, 22 seconds
Courtesy of Video Data Bank at the School of the Art Institute of Chicago

In the late 1960s, the first portable video cameras became available to the general public, catalyzing a generation of artists and citizen journalists. This new technology’s potential for on-the-ground reporting offered the potential for any novice to shift the perceptions of millions of people. The Videofreex, a pioneering media collective, conducted a wide range of interviews from 1969 to 1978. The clip in this work is from interview with Fred Hampton, deputy chairman of the Illinois chapter of the Black Panther Party, in October 1969, just weeks before he was killed when Chicago police officers fired dozens of bullets into his home in a pre-dawn raid. The segment was intended for broadcast by CBS on a new grassroots reporting segment titled “Subject to Change” but never aired, due to irreconcilable differences between the network and the artists.