The Value of “The Big Snooze” and Contingent Matters
Yvonne Rainer

A digital project, part of Passage of a Rumor

A version of “The Value of ‘The Big Snooze’ and Contingent Matters” is included in the book On Value (2015), an expanded record of Value Talks (2013–14), a series of private conversations and performances conducted at the Museum of Modern Art as part of Ralph Lemon’s Artist’s Research Residency, made possible by MoMA’s Wallis Annenberg Fund for Innovation in Contemporary Art through the Annenberg Foundation. “The Value of ‘The Big Snooze’ and Contingent Matters” was published as part of Triple Canopy’s Immaterial Literature project area, which receives support from the Andy Warhol Foundation for the Visual Arts, the Brown Foundation, Inc., of Houston, the Lambent Foundation Fund of Tides Foundation, the National Endowment for the Arts, the New York City Department of Cultural Affairs in partnership with the City Council, and the New York State Council on the Arts. 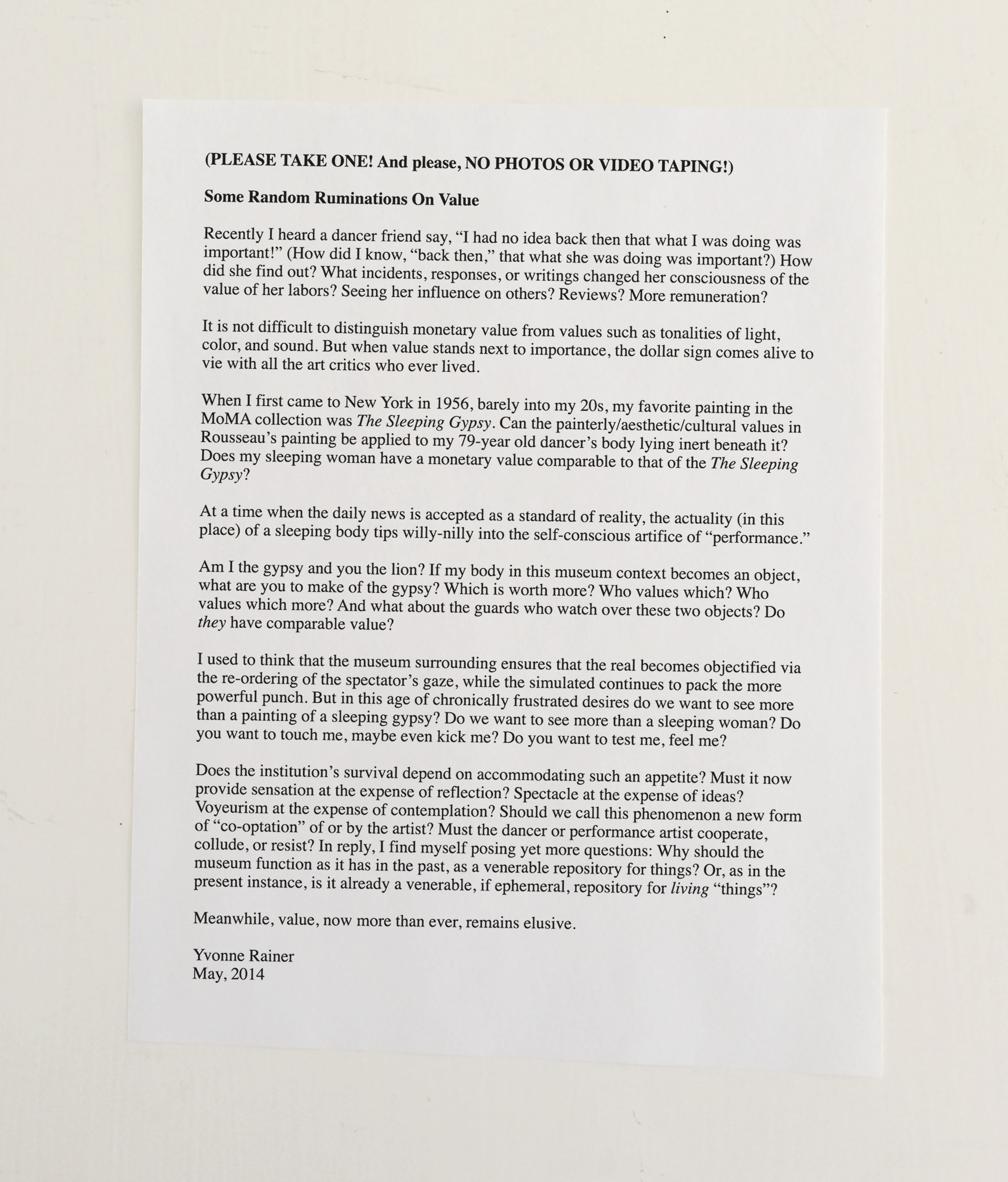 On May 9 and 11, 2014, I was supposed to be found sleeping under Rousseau’s Sleeping Gypsy in a gallery of the Museum of Modern Art. Beside my inert form, on a lectern or music stand, I planned to place a handout.

It didn’t happen, nor is it likely that it will ever happen. As the date of my performance approached, MoMA curators Stuart Comer and Ana Janevski approached me to communicate their reservations about the “timing” of my piece. They were concerned that audiences and critics would view my work as too similar to Tilda Swinton’s 2013 MoMA performance The Maybe, a reconstruction of her 1995 work at London’s Serpentine Gallery in which she lay enclosed in a glass case during museum hours, appearing to sleep. Unwittingly, I had found myself in an extended company of artists of various stripes who were dealing with sleep as a staged event. From recent museum sleepovers for the public to “sleep concerts,” sleeping in art venues has become a symbol for—take your pick—malaise, cynicism, despair, general fatigue, or all of the above.

Even after learning of Swinton’s escapade, I wasn’t fazed. All of this had nothing to do with me, I thought. I was still sheltered in a cloud of self-confidence. Besides, the contextualization afforded by my printed statement made my caper so obviously different from hers that any comparison would be moot. How could I be seen as a copycat?

But then I decided to google photos of The Maybe. I was aghast at the blatant voyeurism of the onlookers who pressed their noses up against the glass cage that enclosed the glamorous celebrity. Initially, this spectacle seemed indicative of nothing more than the pandering that has become a preferred tactic for museums in their voracious search for a wider audience and greater revenue. Sure, call me an elitist and a moralist. But what could those spectators have derived from this experience of gawking that they wouldn’t have gotten at Coney Island? Were I to follow through with my project, would most of them even bother to read my handout?

Somewhat chastened after my meeting with Stuart and Ana, I realized that what I had conceived as a philosophical rumination might well be seen as a frivolous stunt. I agreed that my “snooze” should be canceled for the time being. Without saying so at the time, I thought that if MoMA wants to show unserious work—which it has every right to do—I would not contribute what I now feared would be, or would appear to be, an unserious work of my own. In short, I reassessed the value of my Rousseau idea and came up wanting.

I then began thinking about how to incorporate the “snooze” into an expanded work. The original project was simple and direct. As Ana pointed out, my involvement with The Sleeping Gypsy as a twenty-year-old was very personal, and any expansion should make that clear.

Ultimately, MoMA lent me The Sleeping Gypsy for four performances of a dance called The Concept of Dust, or How do you look when there’s nothing left to move?, which was performed in June 2015 in the museum’s fourth-floor gallery. Guided by two professional art handlers, the painting moved almost imperceptibly from one upstage side of the performance area to the other until it was out of sight. Off the wall, it retained its peculiar exoticism but also became more like an everyday object than a priceless icon. As it moved, performers read texts lifted from wall inscriptions in the Islamic wing of the Metropolitan Museum of Art. The dry descriptions of the histories of ancient Middle Eastern cultures that heaved and clashed and flourished and disappeared so long ago—a history to which most Westerners are oblivious—were a sharp contrast to Rousseau’s fantastical figure. The historical perspective provided by the texts came into my awareness long after my initial enthrallment with the painting in 1956. The mystery and ambiguity in the depiction of the sleeping figure and the hovering animal are what transfixed me then, without my having located it historically or geographically in the context of European expansion and domination.

So it goes. One aborted project leads somewhere else. To be continued … 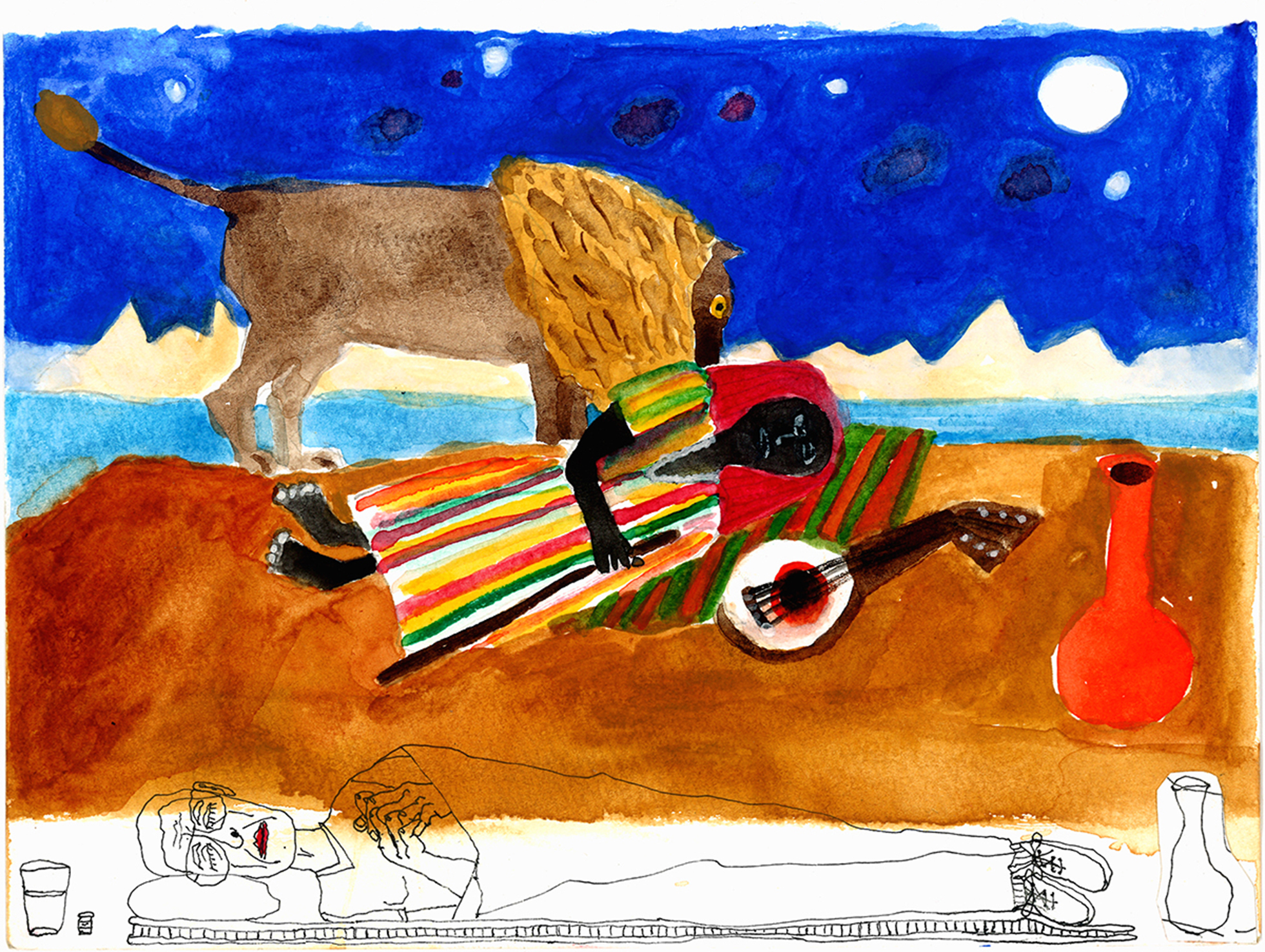