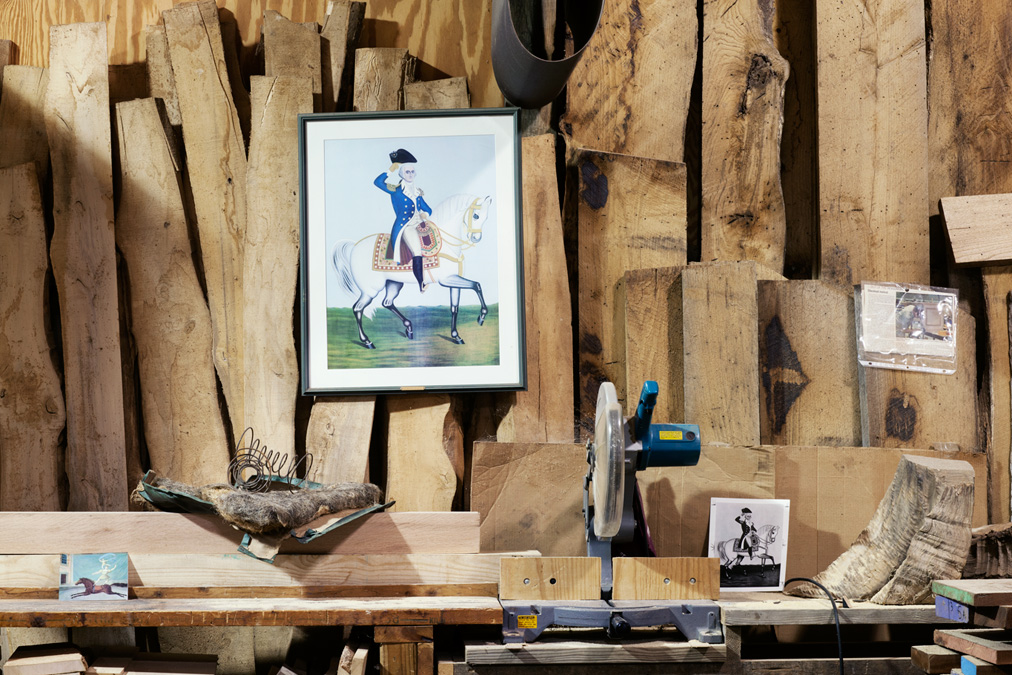 Pointing Machines (Chestertown, Maryland) III was published as part of Pointing Machines, Triple Canopy’s contribution to the 2014 Whitney Biennial. Pointing Machines is named after the simple eighteenth-century measuring tool for reproducing sculpture in stone or wood by means of a system of adjustable rods and needles.

This photograph shows Frank B. Rhodes, a furniture maker and the grandson of Colonel Edgar William and Bernice Chrysler Garbisch, in his Chestertown, Maryland workshop. Taken by Triple Canopy editor Hannah Whitaker, the photograph represents works from the Garbisches' wide-ranging collection of “Naïve Painting” and early American furniture—reproduced as postcards and prints, by exhibition catalogues and newspapers—situated among woodworking tools used by Rhodes to replicate and restore antique chairs and cabinets. Triple Canopy asks how the meaning of artworks shifts as they are commissioned, made, collected, disowned, replicated, photographed, exhibited, and published, taking into account the role of circulation systems as varied as the Metropolitan Museum of Art and eBay.

Pointing Machines (Chestertown, Maryland) III is included in Triple Canopy’s installation at the Whitney. The installation is part of an issue of the magazine, also titled Pointing Machines, that continues the reproduction and circulation of the displayed objects beyond the museum’s walls, and includes essays, artist projects, discussions, and performances to be published and presented throughout 2014.